GMA in Philly: Gritty's wearing a poncho, Robin Roberts is 'Rocky,' and there's a lot of rain 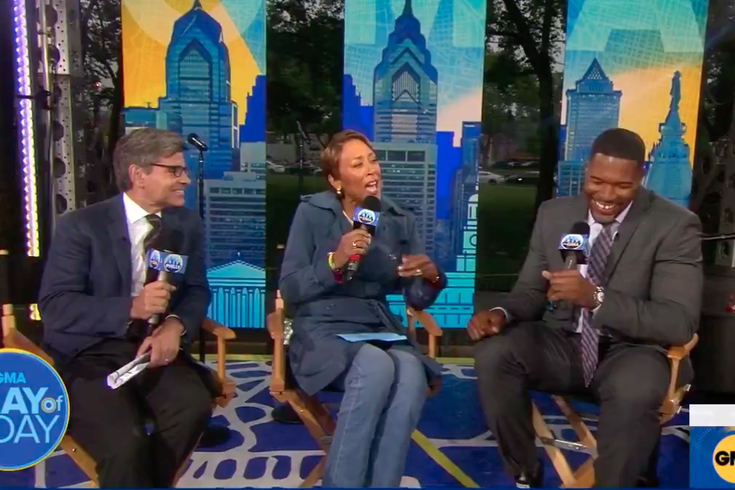 ABC brought "Good Morning America" live from Eakins Oval on Thursday morning — and even the rain couldn't stop it.

The morning show pushed through the wet and the wind to air a live broadcast as part of its summer tour in major U.S. cities.

The show featured co-host Robin Roberts as a "Rocky" figure and Michael Strahan, a former New York Giants star, returning to his football roots welcoming some special guests from the Philadelphia Eagles.

It also included the Eagles' mascot Swoop, as well as Franklin from the Sixers, and, of course, Gritty. He was wearing a poncho. It was really cute.

GOOD MORNING AMERICA —and especially to the great city of Philadelphia!!!! #GMAinPhilly pic.twitter.com/GmbeZxhYkM

LIVE on @6abc from the best city in the world! pic.twitter.com/ElFvI0SgFB

The rain on Thursday morning began sometime after midnight and persisted until about noon in the Philadelphia region, as forecast by the National Weather Service in Mount Holly, New Jersey.

GMA started broadcasting at 7 a.m. Planned segments include surprising a local dad for Fathers' Day, a performance from Patti LaBelle, a cheesesteak standoff between Pat and Geno's, and appearances by local celebrities like Mayor Jim Kenney, Karen Rogers and the Eagles' cheerleaders.

Are you coming to @GMA at Eakins Oval today? Send us your pics using #6abcAction! 📸 #GMAInPhilly pic.twitter.com/UsHPZx0yVp

The GMA crew started their Philly tour on Wednesday when Roberts, Strahan and Ginger Zee threw the first pitches at before the Phillies game at Citizens Bank Park.