Take an October trip to one of these six frightful attractions 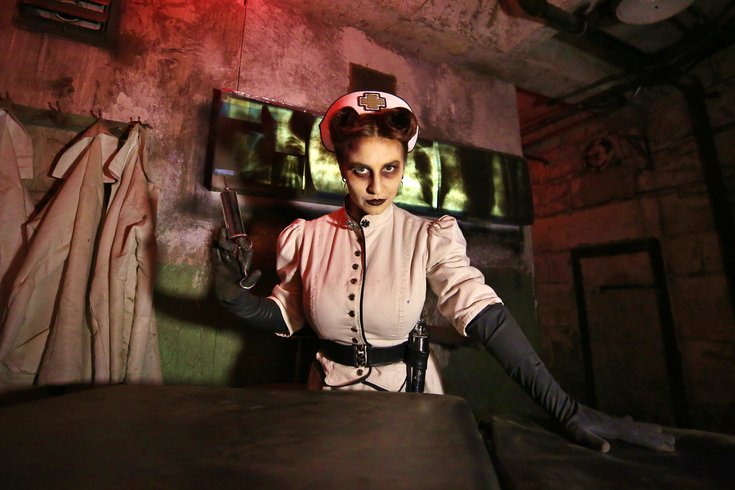 To celebrate its 2018 season of scares, "Terror Behind the Walls" unveils a newly revamped attraction: "Infirmary."

American consumers are expected to spend a whopping $9 billion on Halloween in 2018, continuing the holiday's upward economic trend even as towns across the country ban teens from trick-or-treating.

On average, that means the National Retail Federation predicts you will spend $89.79 on a mix of costumes, candy, party supplies, decorations and other events associated with Halloween.

Do you want to be average? No, because you'd rather be caught dead.

When it comes to Halloween-themed attractions, Pennsylvania is a truly horrifying place to be, according to the Haunted Attraction Association.

The HAA's annual ranking of the top 31 Halloween haunts in America includes six Pennsylvania attractions, more than any other state.

Here are the places they suggest you visit this month if you're looking for a good scare.

Now in its 26th season, Field of Screams is a rural nightmare come true. With four main attractions, the Mountville horror show will take you through cornfields stalked by hideous creatures, a haunted house and a forest that never sleeps.

Access to the attractions ranges from $16-35 (cash only at the booth) depending on much you you're willing to spend, or how much your heart can take.

In southwestern Pennsylvania, Haunted Hollow offers six total attractions, including a Revolutionary War-themed boarding house and an experimental asylum where the doctors and patients have all lost their sanity. There's also a 15-minute escape room in a harrowing place called Willie's Shack.

This 65-acre scream park offers more than 90 minutes of scare time across four attractions. A haunted hayride, a dark forest, a pitch-black maze and a zombie apocalypse all await those who dare to enter the Reaper's grounds. This video probably says more than any description could.

The Steel City's Scarehouse is as much a work of art as a work of abominations. Clowns, demons and hordes of the walking dead populate the premises of this haunted hell-house. Full endorsements come from Elijah Wood and Guillermo del Toro.

General admission tickets start at $16 and go up to $40 for an "RIP" experience.

This Berks County attraction offers the best of all underworlds, with eight different stops to choose for your own personal fears. That includes a weekend haunted house — The Unkown 2.0 — that you can tour in nothing but your underwear.

There's also a Zombie Safari Hayride, a zombie laser tag experience and a station where costume and makeup artists will turn you into the zombie.

Shocktoberfest Video 2018 from ShockZombie on Vimeo.

Single attraction passes start at $20 and go up from there, while an all-access combo pass costs $50. The "RIP" upgrades apply at all levels, starting at $35 for one attraction.

Terror Behind the Walls has a reputation that precedes it in Philadelphia. The true appeal of this haunted prison experience is that its six cellblock attractions are housed in the halls of history. Dating back more than 180 years, the prison was intended to test out a strict disciplinary model for inmates, who were there to experience deep remorse for their criminal actions, rather than be rehabilitated.

There's no way those spirits aren't out for vengeance.

If you're going to spend $90 this Halloween, why not take a trip to one of America's best haunted attractions? You might come out looking like you're in costume already.