Handing out 10 awards from the Eagles-Jaguars game

The Philadelphia Eagles badly needed win overseas against an equally desperate Jacksonville Jaguars team, and while it wasn't always pretty, they got the job done and can head home happy.

In the first quarter, while already in field goal range, Wentz threw an interception. It was his first INT in over 200 attempts:

That interception felt like a huge mistake, but that's probably because expectations for Wentz have grown substantially. On the day, Wentz was 21 of 30 for 286 yards, 3 TDs, an INT, and a QB rating of 119.6. He also made several plays with his legs, running 6 times for 28 yards.

He was great. And you know what? It didn't even feel like a great performance, for him. When you can kind of shrug at a quarterback performance in which he makes several big plays and ends with a stat line like the one above, that is the sign of an elite quarterback.

While Wentz was indeed great, as usual, earlier this week we reviewed each of Carson Wentz's 29 fumbles in his 34 career games. In case you missed it and have time to watch a boring eight-plus minute video of me breaking them down, you can watch it here:

The Cliff's Notes version of the above is that there are four themes with Wentz's fumbles:

Well, now it's 30 fumbles in 35 career games, and it came in another "ignoring his internal clock" situation.

TE stunt from Jacksonville as Marcell Dareus records the strip-sack on Wentz. That's Wentz's 7th fumble of the season. pic.twitter.com/EkFjpQFK0Q

Obviously, primary blame goes to the poor job of Jason Peters and Isaac Seumalo protecting against a stunt (another major issue this season), but Wentz's fumbles are indeed a problem.

"It sucks," Wentz said when asked about his fumbling issues. "It's something I have to clean up. I have to look in the mirror and say, 'How can I protect the ball a little bit better?' Sometimes it's just getting the ball out earlier and finding my guys faster. It's something I'm definitely looking at."

After practicing at the slot corner spot for the entirety of training camp, the preseason, and the first few games into the regular season, Maddox was thrust into a starting safety role after never having played the position in his life.

Maddox had two huge plays against the Jags on Sunday. He tackled Carlos Hyde for a loss on a key 3rd and 1, and later forced a fumble when he was able to get a hat on the ball after a reception by Keelan Cole. Here's Maddox's third down stop:

Avonte Maddox brings Carlos Hyde down short of the 1st down sticks on 3rd-and-1 pic.twitter.com/mqkxGWKlZ5

The Eagles list Maddox (perhaps generously) at 5'9, 180. He plays much bigger than he is.

Goedert only had one catch, but it was a huge one. On a play in which Wentz rolled right, Goedert came open over the middle, made the catch, and showed once again that he can make plays with the ball already in his hands.

In addition to his ability as a receiver, Goedert has proven to be a very good blocker so far in the NFL, a rarity for a rookie, much less one from a lower level of college football.

Smallwood's stat line isn't overly remarkable (8 carries for 24 yards, 2 catches for 42 yards and a TD), but it was arguably the most important performance of his career to date. The play that stood out was his 10-yard run on 2nd and 9 to seal the game.

Great run there by Smallwood. Protected the ball and ran behind his pads. Fought through contact and got the 1st down. That's winning football.

With this win over the Jags, the chance that the Eagles will trade for some additional help before the trade deadline had to have gone up a tick, I would think. While the Eagles can absolutely use added help, I do think that the following is a very good point by Bo Wulf of The Athletic:

The Eagles are winning 10-6 thanks to Avonte Maddox and Dallas Goedert. Maybe hold off on giving up those draft picks for aging veterans.

Wanna trade one of the extra second-round picks the Eagles have in the 2019 NFL Draft? Know that the Eagles could be missing out on a player as good as Goedert, who will also play on a super-cheap contract for the next three years. Wanna trade for a somewhat lesser player for, say, a fourth-round pick. Know that they could be missing out on a player like Maddox, who has stepped in and been terrific.

That's not to say that the Eagles shouldn't be buyers at the trade deadline. For example, their trade for Jay Ajayi last season was a deal worth making. Still, Roseman can't let the heat of the moment cloud his judgment. If the Eagles trade for a player, they have to be sure they get good value in return.

The Eagles took advantage of decimated Jaguars secondary, as Wentz completed 5 passes of 30-plus yards. Matthews had 2 of those 30-plus yarders, and ended the day with 4 catches for 93 yards on 5 targets.

Another game, another injury that is going to sting. According to Jeff McLane of the Inquirer, Johnson has a Grade II MCL sprain that is likely to earn him a "week to week" label from Doug Pederson.

It’s a Grade II MCL sprain, which is a partial tear. https://t.co/uggvdob1SK

The Eagles have been rocked by injuries this season. 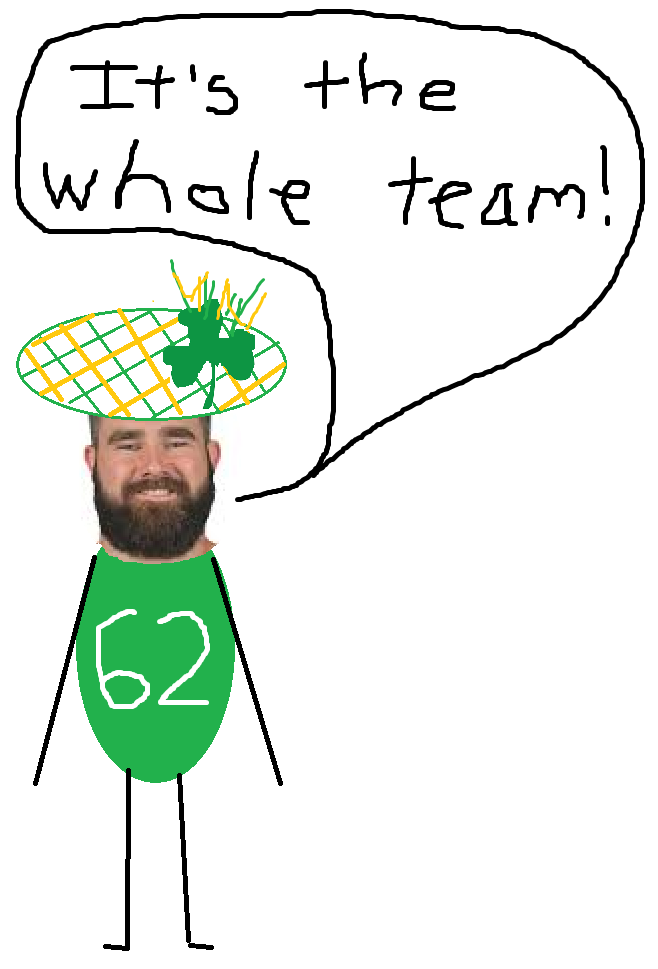 If there's a team in desperate need of some time off, it's certainly the Eagles, not only because of the injuries noted above, but also after what was a difficult road trip to London in which the players had a brutal week of preparation, and adjustment to the change in time.

Oh, and hey, on the other side of the bye, it's another huge game, as the Birds will face the Dallas Cowboys at home on Sunday Night Football.

Doug Pederson has previously said that the Eagles' benefited last season from an extended road trip last season in Los Angeles. On Friday, he was asked if this oddball road trip to Europe could have long-term benefits.

"I think the biggest thing is just that we're all together," he said. "We're not scattered out like if we're in Philly or back home. But in LA we were all together. Here we're all together, and it's just us. So that kind of brings you together just a little bit, and guys get to hang out if they decide to do something later today or tomorrow. I think it's important that they bond that way. They talk about being family, they talk about brotherhood and all that kind of stuff. Well, this is just evident of that."

I don't know if there's anything to bonding on a long trip or not, but I will say that the Eagles' locker room celebration was easily the loudest of the year. At a minimum, the Eagles grabbed some momentum heading into the bye.