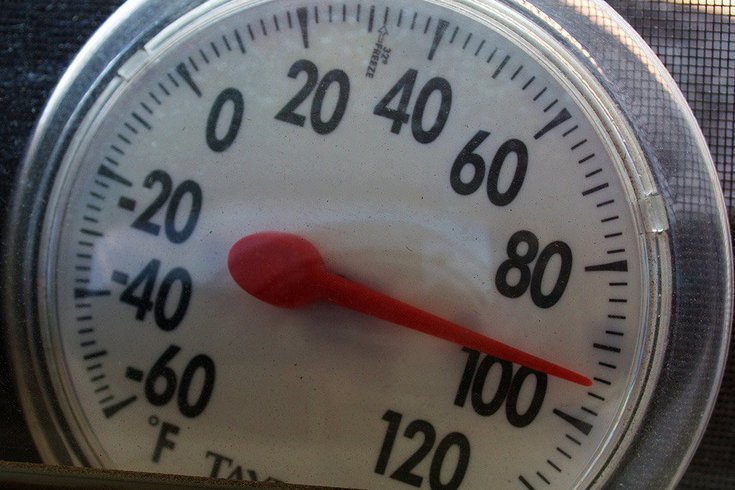 High temperatures will hit the Philadelphia region this weekend, with a heat wave expected to bring temperatures as high as 101. Surrounding counties in Southeastern Pennsylvania, and Delaware and New Jersey will see high heat and humidity as well.

Intense heat, humidity, and record-high temperatures are expected to hit Philadelphia over the next few days, according to the National Weather Service.

High temperatures begin early Saturday, with a high of 96 degrees for the day and a low of 74 at night. An "excessive heat warning" has been issued for the following days, beginning Sunday at 12 p.m. and extending until Monday at 8 p.m.

On Sunday and Monday, temperatures could get as high as 101 degrees. Temperatures in Philadelphia haven't touched 100 in eight years, meaning this heat wave could break the on-going streak. Humidity will be approximately above 50%.

Good Morning Everyone! 🥵The briefing for the dangerously hot conditions expected over the next several days has been updated here: https://t.co/JiD09BPJVv#njwx #mdwx #dewx #pawx pic.twitter.com/uEGffm68Ex

The Red Cross recommends that residents take certain precautions in the coming days, as conditions like heat stroke and heat exhaustion brought on by the heat wave can cause dangerous or even fatal health effects.

Children or pets should not be left alone in vehicles, residents should stay inside rooms with air conditioning, wear loose-fitting and lightweight clothing, and stay hydrated by drinking water and avoiding drinks that contain caffeine or alcohol.

This summer, the Red Cross also advises that residents stay cool while taking precautions to prevent the spread of coronavirus. While wearing a mask, individuals should take breaks or go inside to avoid overheating.

There is also 30% chance of thunderstorms and rain during the heat wave.

If there is rainfall without storms, it is expected to be less than one tenth of an inch, but if storms occur there may be more. Rain and storms are most likely to occur between 2 p.m. Monday afternoon and 2 a.m. Tuesday morning.

Here's a look at the full NWS forecast for the coming days of heat in Philadelphia.

SUNDAY: Patchy fog before 8am. Otherwise, sunny and hot, with a high near 97. Heat index values as high as 101. Light southwest wind increasing to 5 to 10 mph in the morning. Partly cloudy, with a low around 78. South wind 5 to 10 mph.

MONDAY: A chance of showers and thunderstorms, mainly after 2pm and before 2 a.m. Mostly sunny and hot, with a high near 99 during the day, and 96 at night. West wind 5 to 10 mph. Chance of precipitation is 30%. New rainfall amounts of less than a tenth of an inch, except higher amounts possible in thunderstorms.