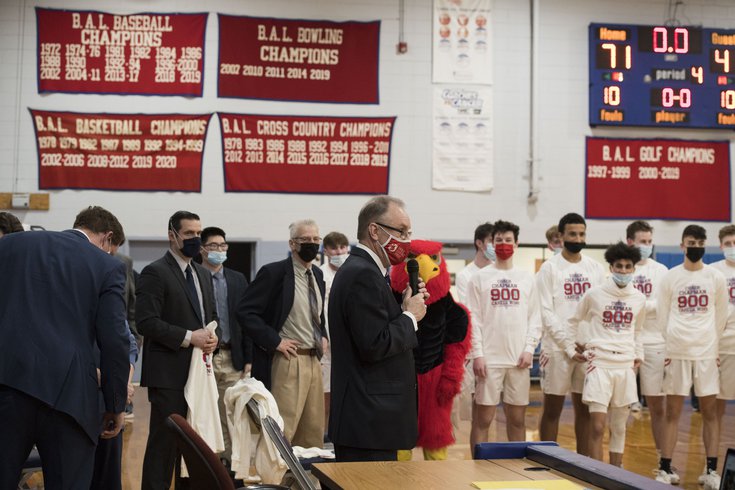 When they were refurbishing the Firebird Fieldhouse on the Holy Ghost Prep campus about 15 years ago, some students passing through the gym noticed a four-foot stretch of faded hardwood in front of the Holy Ghost Prep bench. It had eroded through time to a worn sepia tone, darker in contrast to the rest of the hardwood basketball court.

The section of flooring was whittled down to the grainiest, fibers of wood where longtime legendary Firebirds’ coach Tony Chapman would stand, sometimes stomp his heels and pace.

At 67, Chapman is still wearing out wood now in the very place that bears his name, the “Chapman Arena at Holy Ghost.”

On Thursday night, Chapman’s legacy spawned another chapter when he notched his 900th coaching victory, in a 71-41 decision over Dock Mennonite Academy. The win places Chapman on a rare plateau among six high school basketball coaches in the history of Pennsylvania with 900 wins or more.

In 43 years of coaching at Holy Ghost, Chapman has had only one losing season, won 23 Bicentennial Athletic League (BAL) titles, nine District One crowns, and two Eastern state titles, reaching the PIAA state finals in 1999 and 2004.

“I still have the spark, I’m not tired yet,” said Chapman, whose first season at Holy Ghost was 1978-79 when he was 24. “There are a lot of people I have to thank for getting me here. My family, my wife, Jane, and my assistant coaches, especially Tom Finnegan, who passed away last November after 30 years with me, and Bruce Simon, who was with me my first 10 years and with me these last 15 years.

“I’d like to think I’ve adjusted through the times. I don’t care what anybody says, the kids are different today. People say the kids are the same. No, they’re not the same. It’s a different generation. Kids change all of the time. Certain values are consistent, but you have to roll with a different makeup. There are things I allow that 15, 20 years ago I wouldn’t allow at all. You have to change. You have to adjust.”

Brett Manney is a 2004 Holy Ghost graduate who was one of the centerpieces of arguably the Firebirds’ greatest team. Holy Ghost went 31-1 in 2004 and reached the Class AAA state finals, where it suffered its one loss to Moon, 52-50. Manney, now 35, went on to play a vital role for Delaware’s only Final Four lacrosse team in 2007, but he doesn’t forget the impact Chapman made on him that resonates today.

“I remember when I came in with Coach Chapman as this disciplinary basketball coach and over the years he lightened up and by the time I left, we got to see the human side of Coach Chapman,” said Manney, who played with his twin brother, Ryan. “We’ve kept in touch ever since I left Holy Ghost. To me and my brother, he’s always going to be our coach. He taught life lessons.

“Coach Chapman meant the world to us. You learned through him that if you hard work at what you want to accomplish, and you’re a team player, you’re going to be successful in whatever you want to do. I’ll tell you it still haunts me to this day that we didn’t win that state title game. All of those guys would have run through a wall for Coach Chapman.

“It’s why guys stay there and guys who graduated come back.” 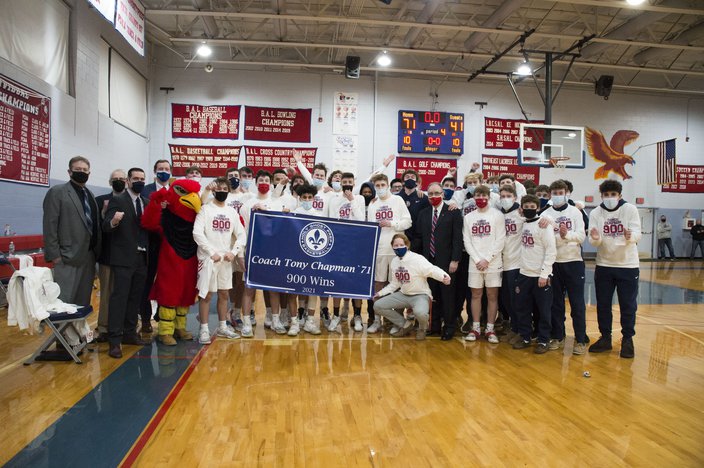 Like Firebirds’ assistant coach Tom Heston, a 2012 Holy Ghost Prep grad, and Firebirds’ junior varsity coach Jack Crouse, who has been with Chapman for 11 years.

“Coach Chapman always keeps his players first and does what’s best for them at all costs, and that’s what makes him special,” Crouse said. “He’s a model for how to treat his players and he shows patience with them. He knows what teenagers go through and he’s reasonable. He’s big on learning from mistakes and allowing his players to grow.”

Jack McDermott, a 5-foot-11, senior starting point guard, is headed to Amherst on a baseball scholarship. This is going to be his last year of playing organized basketball and his last basketball coach will be Chapman.

McDermott has taken the little things Chapman stresses, like talking on defense and getting the message across to always work hard. McDermott laughs when he hears the older Firebirds talk about getting the softer version of Chapman.

“Coach Chapman is very good at giving advice so you don’t make the same mistakes, and it sometimes he can come across in an old-school way,” McDermott said, laughing. “You do want to play for someone like him, definitely. This is it for me, and that’s crazy to think about. I think the biggest memory that I’ll take away is how close were are as a team.

“We all play for each other. Coach Chapman plays a big role in that.”

Ryan O’Hara, the Firebirds’ 6-foot-5 senior center, does intend on playing basketball in college. O’Hara has a unique perspective on Chapman, since he was a 12-year-old in the Holy Ghost stands with his older brother Colin watching Chapman win his 800th game.

“I think what I’ll take with me about Coach Chapman is that it’s not always about the skill that you have than it is the heart you have,” O’Hara said. “It’s not always the best players that win, but the teams that work hard. He does get the best out of his teams. I know because I used to watch Ghost games when I was a kid.

“Obviously, 900 wins, that’s a great thing to be a part of, and it’s something I’ll never forget. I know I got to see history when I saw Coach Chapman win his 800th game and I got to be part of history when he won his 900th.”

There’s no doubt Chapman is singular.

“We are blessed to have Tony at Holy Ghost Prep,” says Holy Ghost president Gregory J. Geruson, a ’79 Ghost graduate. “The success that he has enjoyed as a coach and the number of young men’s lives, he has impacted is truly mind-boggling.”

But how much longer does Chapman want to go? What’s the motivation?

“I love the game and I love where I’m working, because this school has been so good to me,” said Chapman, Holy Ghost’s disciplinarian. “The administrators, the teachers, and not just the players, but the kids in the school. If I’m not at Holy Ghost, I don’t know if I would be in the same mental frame and enjoying it.

“I’ve had unbelievable support from my family, and they’ve sacrificed, too. I love what I do. How many people can say that? Yeah, you can say that I’m still wearing out hardwood.”

1. The late Renzie Huffman (1,255 victories as the girls and boys basketball coach at Mercer High School and Clintonville High School).

Joseph Santoliquito is an award-winning sportswriter based in the Philadelphia area who has been writing for PhillyVoice since its inception in 2015 and is the president of the Boxing Writers Association of America. He can be followed on Twitter @JSantoliquito.