How the Paris terrorist attacks shaped their music: The Dove & the Wolf 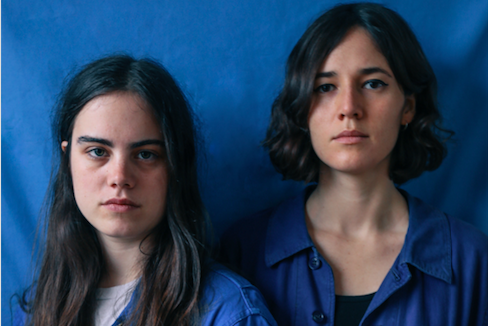 The Dove & the Wolf appear Saturday, Jan. 13 at Johnny Brenda’s in Fishtown.

Few artists move from Paris to Philadelphia unless they have to, yet Paloma Gil and Louise Hayat-Camard – the duo behind the lofty, folksy local duo The Dove & the Wolf – seem pleased as punch that they made that move.

Having created a lush sound of big harmonies and cheerily reflective lyrics on EPs, such as their eponymously-titled 2012 debut and their initial Philly recording (“The Words You Said” of 2014), the pair have found a darkly ruminative tone on their latest project. That would be 2017’s “I Don’t Know What to Feel” and its forlorn centerpiece, “Seven Days.” Currently on tour throughout the U.S., The Dove & the Wolf return to Philly to put the finishing touches on their debut album and for a homecoming gig at Johnny Brenda’s tomorrow night.

RELATED STORIES:
The Cherry Poppin' Daddies were stunned by their swingin' success | Television – not the boob tube – but the band, is back | 'Cars' hitmaker Gary Numan dissed by Billboard

PV: I know that the two of you have been playing together for 12 years, but how long had you known each other prior to collaborating?

LHC: We met 14 years ago, through MSN Messenger. I lived in Martinique and Paloma lived in Paris, where we started chatting about music. Then eventually, we met in real life three months later, when I was visiting my dad.

PG: We started playing music together on that day we met, but actually didn’t start writing together until five or six years ago.

PV: Why did you two decide to write and play together in the first place, as opposed to being two friends with separate solo careers?

PG: We had solo projects before and would collaborate on each other’s songs and cover tunes we loved.

LHC: Playing together was something that we did for fun, and one day, I had a deadline to write a song for a friend’s video, so I asked Paloma if she wanted to join forces. We got together, finished writing the song, and it happened so easily and quickly that we had to keep the fun going. That’s when The Dove & the Wolf was born. Looking back, it wasn’t really a decision. It happened quite naturally on its own after years of learning together.

PV: From the first EP, going forward, how and why did the two of you decide upon beach-y, fingerpicked acoustic music and big harmonies as your signature sound?

PG: It’s what felt the most natural. It comes from all the music we listened to at the time and probably also because when we started, we played acoustic guitar and fingerpicking seemed like an obvious playing style.

LHC: We were big on vocal harmonies simply because it feels so good.

PV: How and why did you settle on living in Philadelphia?

PG: Because Boyz II Men are the masters of vocal harmonies and we love them. Philly is, in a lot of ways, similar to where we grew up. People are real, and there’s a ton of really good food. We’ve even found places that make legit croissants.

PV: With your most recent EP, “I Don’t Know What to Feel,” you seem to be reaching out to the local community for sonic aid – people such as Dave Hartley and Nick Krill from Nightlands and The War on Drugs. How did that happen in the first place, and are they continuing to work with you on new material?

LHC: We were friends with Dave prior to working together, and the year before we wrote the EP, “I Don’t Know What To Feel." We had been listening to Nightlands a lot and felt very in tune with his vision of sound.

PG: And he brought in Nick, which was awesome. A dream team, truly. Recording was the most fun. So fun that about a year ago, when the Fat Possum label put out, “I Don’t Know What to Feel,” we went back in the studio with them and tracked a full-length album, and we can’t wait to share it. We don’t have a precise date, but expect it to be very soon.

PV: Much has been made of “The Smell of Us,” and your Paris anti-terrorism anthem, “Seven Days,” which is more serious and less wifty than past material. How do you feel that these songs have been game changers? Do you believe the new material continues forward with that same lyrical vibe?

PG: It’s true that “Seven Days” is about a more serious subject than any of our other songs because it's about the attacks that happened in Paris in November 2015, but it really is about community, people coming together, trying to understand your feelings and spreading love because you're not alone.

LHC: So, in a way, our previous material is about the same thing, and it's not less serious. Our purpose is not necessarily to write serious songs, but rather, songs that are true to things that were felt and that humans can connect with, together.