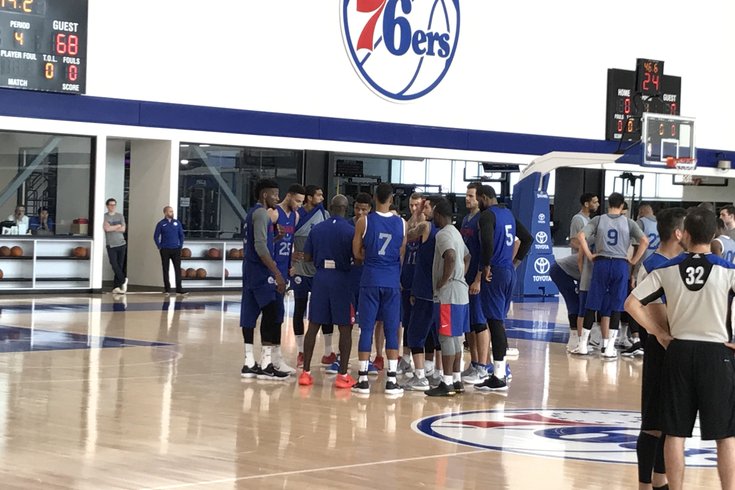 Sixers players huddle up at the end of a training camp practice.

If you took an informal survey at the Sixers’ practice facility, I doubt you’d find more than a couple people who would argue it was beneficial for Joel Embiid to miss his first two seasons with foot issues. How could you? He kicked in the door with gusto during his 31-game rookie season, but the lingering health concerns made it less enjoyable than it maybe should have been.

Still, when you watch Ben Simmons go through live drills at training camp, it’s hard not to wonder whether the year to get acclimated to the NBA lifestyle could have some side benefits. He was the center of attention for most of what we got to see at the first two days of practice, and indeed, when he was asked about what was different this camp, Simmons rattled off a list of things he no longer had to think about in Year Two.

“I see a lot more. I know where people should be on the floor,” said Simmons. “I’ve got to be a vocal leader now, and that just takes time, knowing their best positions and working well together…Coming in I was brand new to it, so I had no idea, getting on the plane where I was supposed to sit, where I sit on the bus, things like that. And now I get on, I just know where to go, where to be, what I’m supposed to be doing, I just feel really comfortable.”

He didn’t really have to verbalize that for his point to shine through. Simmons has been the focal point for the de facto first unit, most often flanked by Markelle Fultz, JJ Redick, Robert Covington, and Kris Humphries (who was standing in for Joel Embiid), acting as both the initiator and the finisher.

First unit (minus Embiid plus Humphries) running through some drills pic.twitter.com/9kD7YQH3LA

Simmons’ lone season at LSU seems like a distant memory now, even to the men who practice with him day after day. Backup center Richaun Holmes, who got plenty of first-team reps with Joel Embiid sitting out of 5 v. 5 drills this week, said on Tuesday that there’s a noticeable difference between the Simmons of this camp and the Simmons he saw last fall.

“His IQ, he knows his spots,” Holmes noted of Simmons’ progression. “Taking a year watching, you can tell it helped him. He knows how to pick his spots and how to get us involved and things like that. You just feel like when it slows down [for him] a little bit, it’s going to be dangerous.”

There’s nothing as valuable as live-game reps for a developing player, but Simmons, like Embiid before him, could end up being a case study for a development path more common in the NFL. Liken it to the road Aaron Rodgers took before becoming an NFL starter: without the pressure of needing to start (and likely fail) right away, he was able to sharpen the mental side of running an offense, setting the stage for his dominant performance over the last decade-plus. If Simmons has anything close to a Rodgers-level impact in his sport, the Sixers will happily take it.

And make no mistake: Simmons is the quarterback of this offense.

Ben Simmons just ripped a d-board, collapsed the opposing team in transition, kicked to an open Covington in the corner. 💰 pic.twitter.com/Ux4nHu0bdr

The hiatus is also paying dividends on the leadership front, if you take Simmons at his word. His designation as a “point guard” rather than a point forward, which has been hotly debated for the last 18 months, is received by Simmons as a sign of respect from Brett Brown. The trust level from the coaching staff has empowered him to take increased responsibility despite not playing in an official game yet.

“If coach wouldn’t trust me, I wouldn’t be the point guard,” said Simmons. “Knowing coach trusts me gives me confidence to be vocal and say what I need to say, but also to listen to everybody else.”

Brown agrees with the assessment. After a more formal 5-on-5 session during Wednesday’s practice, the Sixers’ head coach told reporters that even if you don’t always hear him, the coaching staff can feel Simmons’ impact on the players around him.

“A lot of times he’s right in offering advice, because he knows me, he knows our language, he can talk to the terminology, he can speak to the offense and defense better than he could have just coming out of LSU,” said Brown. “I think like all of us, he feels prepared, and when you feel prepared you’re more confident. Because it’s not his personality to be Earvin “Magic" Johnson sort of vocal, he does it in sort of a quiet way, he does it in his own time, but he does it.

Now he just needs to take the first real step: doing all this against a hostile opponent, instead of in a friendly gym. No pressure, young fella.