The migrant girl with the developmental delay, who had been kidnapped in Matamoros, Mexico, and her family were granted asylum in the United States earlier this month due to the intervention of the Congressional Hispanic Caucus.

Dr. Maura Sammon returned several weeks ago from Matamoros, Mexico, where she spent a week treating migrants at the largest refugee camp on the U.S. border.

Yet, the fate of a young, migrant girl remains at the forefront of her mind.

The girl had been kidnapped along with a couple family members while staying in the city. Another relative, located in Philadelphia, had paid a ransom to free them.

But they remain in danger, said Sammon, an attending physician at Temple University Hospital's emergency department who volunteered in Matamoros for Global Response Management, a nonprofit that delivers medical care in high-risk areas.

Local gangs now know that the family will pay a ransom, Sammon said. And the girl has a developmental delay that makes her easily recognizable – a prime target. Indeed, she survived a second kidnapping attempt, again as they family sought shelter in the city.

"She was trying to stay there instead of staying in the tent at the refugee camp," Sammon said. "It ended up a town with an actual roof over her head was more dangerous than a tent."

The girl and her family are among some 1,600 migrants who have settled at the Matamoros refugee camp, a byproduct of the Trump administration's Migrant Protection Protocols, which sends asylum seekers back to Mexico until their cases are resolved. Previously, they were permitted to stay within the U.S. as their cases played out.

Sammon conducted a medical examination on the girl in hopes of demonstrating that she had an acute medical need that could not be met in Mexico. If so, the U.S. would let her enter for treatment while her family's asylum request played out.

Sammon and a group of attorneys worked to line up medical care, psychiatric care and social work assistance for the girl in Philadelphia. But her case was denied.

As of Thursday, the girl and her family remained in Mexico awaiting an immigration hearing. America, and the hope of a better life, lies about 150 feet away from the refugee camp.

"In general, a lot of our patients are waiting months for their first date, said Dr. Megan Algeo, another Temple emergency department physician who volunteered her time in Matamoros. 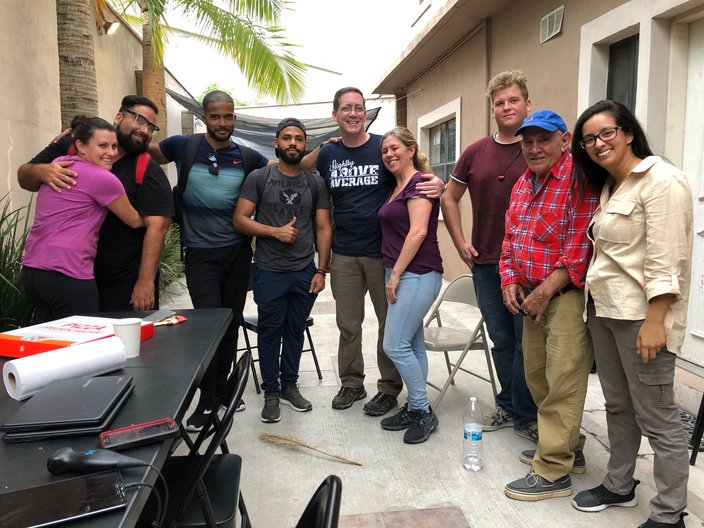 Temple doctors Maura Sammon, in the middle in a purple shirt, and Kendra Mendez, far right, pose with their fellow team members who volunteered at the refugee camp in Matamoros, Mexico.

The Matamoros refugee camp has formed at the base of the Gateway International Bridge, which connects Matamoros to Brownsville, Texas. Hundreds of tents reportedly are clumped together near the banks of the Rio Grande River, where many migrants bathe and wash their clothes.

In the absence of the United Nations, Global Response Management provides the only medical services, utilizing volunteer physicians – like Sammon, Algeo and Temple resident Dr. Kendra Mendez – to provide care. Other groups, including lawyers and social workers, also have established outposts.

"There's really no centralized organization providing for these individuals," Sammon said. "It really is a grassroots effort that a lot of small organizations have come together ... to try to meet this vacuum down there currently."

The Temple doctors said they treated patients for all kinds of conditions including strep throat, chicken pox and respiratory infections, which can spread quickly in such living conditions. Others came with more chronic conditions like diabetes or thyroid disorders. About two-thirds of them were children.

In some cases, the physicians worked alongside lawyers to formally request that patients receive treatment in the United States because they otherwise lacked sufficient access to medical care.

The Temple doctors transported several patients to the U.S. during their time there, but Sammon said they made requests only in the most severe cases, fearing the privilege could be revoked.

One man's oxygen levels had dropped so low that he needed emergency care in the U.S. Another patient with a third-degree burn was sent to a burn center in North Carolina.

"It's appropriate to use this judiciously because if it's a 'loophole' that is exploited, then it will be closed for those who need it most," Sammon said.

But the process can be time-consuming, leading to delays in care.

One child had a case of appendicitis that required immediate surgery, the doctors said. His appendix ruptured before they could gain approval for him to receive surgical care in the U.S. Eventually, he was treated in Brownsville.

"He's doing well, but that certainly is something that led to a delay in care and harm in a child," Sammon said. 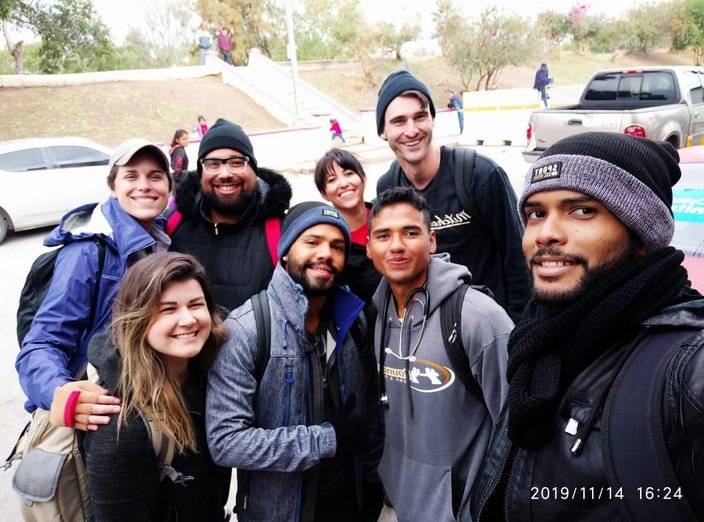 Dr. Megan Algeo, far left in the back, poses with team members who volunteered at Matamoros refugee camp along the Rio Grande River in Mexico. Some 1,600 migrants have settled there while they wait for asylum hearings in the United States.

More than 56,000 migrants have been sent back to Mexico since the Migrant Protection Protocols, also known as "Remain in Mexico," were adopted, according to the Transactional Records Access Clearinghouse, a research center at Syracuse University. Because the asylum process can take years to complete, relatively few have been granted asylum.

So, many of the migrants wait for their hearings in refugee camps, like the one in Matamoros. Some stay in the city, but others are afraid to enter, fearing they'll be targeted by gangs and drug cartels, the doctors said. But illnesses, like influenza and chicken pox, spread rapidly in the confined refugee camps.

"I think we've been able to do a lot of good down there, but it's definitely not a safe situation for any of the patients down there," Algeo said.

Sammon already is scheduled to return to Matamoros in February. She's served in similar capacities at various places throughout the world, including Cambodia, India and Sri Lanka.

For now, her mind drifts to the girl with the developmental delay. One moment in particular stands as "one of the sweetest things I ever saw," she said.

"While we were working on her case and trying to do her documentation, she was laying with her brother in the next room and coming over and playing with us," Sammon said. "She grabbed her brother by the hand, walked her brother into the room and put her brother's hands in my hands, and then put her arms around both of us."

Every time Sammon tells the story, tears come to her eyes.

It's "unquestionably," she said, "the case that keeps me up at night."