The 76ers survive wild finish for win over Pacers without Joel Embiid. 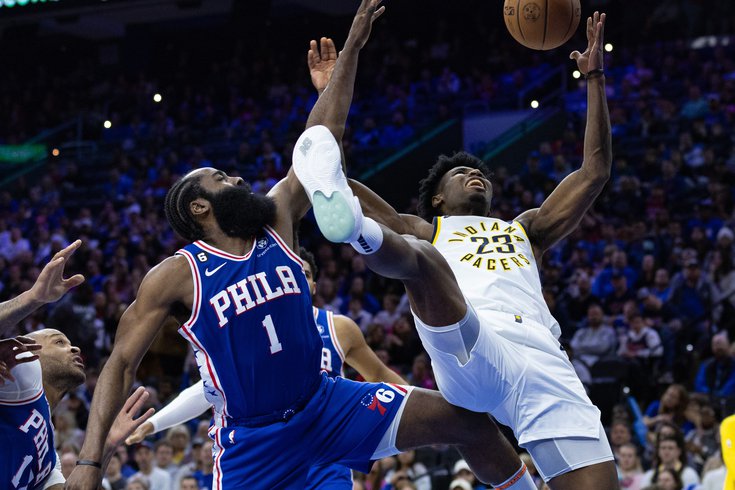 James Harden did it on defense Wednesday night.

The Sixers survived yet another chaotic fourth quarter and took down the Pacers in overtime, snagging a 129-126 win that featured almost no defense.

• Whether it worked or not, I was glad to see Rivers try something different with the starting group. Small ball was something that worked well for them early in the season, and it's a look they're almost certainly going to use in the playoffs.

The Pacers are right in the sweet spot, good enough to make you work but not quite so good that you can't experiment against them in a regular season game during the month of January. These are good opportunities to get reps in for down the road.

One of the reasons you play a small-ball lineup and spread it out is to try to make the most out of James Harden's scoring abilities. He may not be able to summon 30-point performances as regularly as he used to, but you don't want to give Harden space in the middle of the floor and a semi-favorable matchup on the perimeter.

The Pacers ended up doing that for a lot of this game, and Harden was ready to exploit it. Our old friend T.J. McConnell was stuck on Harden for chunks of the first half, and that was mostly a disaster for Indiana, as Harden quickly drew two fouls by playing right through McConnell's physical defense. And there were quicker, more decisive scoring moves in the first half. Harden dusted Myles Turner on one switch, put together some nice crossovers and combo moves, and generally had an easy-ish time creating separation throughout the night.

Getting Harden to rip catch-and-shoot threes has been a challenge for quite a long time, but to his credit, Harden has had a quicker trigger in those situations lately, which not only makes him more useful when Joel Embiid is camping out inside the arc, it makes him a more valuable offensive player, period. Even if he's not as comfortable in that spot as some of their designated shooters, I'd rather live with Harden's volume shooting than just about anybody else on the roster.

Harden was, frankly, not good down the stretch of this game, committing some mind-melting turnovers and missing a pair of free-throws with 30 seconds left in overtime that could have cost his team the game. But it should be said that Harden came up with two game-winning plays on the defensive end, one at the end of regulation and one immediately after those missed free-throws in overtime. It's not the sort of thing we're used to seeing from him, and he deserves credit for setting aside the turnovers and issues on the other end to find a way to help his team win.

• De'Anthony Melton has done basically everything I think people would have wanted P.J. Tucker to do in the "little things" department, while adding so much more as a floor spacer, cutter, and defensive ballhawk. If Melton is on the floor, he's almost certainly the most likely guy to soar through the air for a tough offensive rebound, or dig out a loose ball on the baseline, or break up a transition play with a spirited effort.

It's part of the reason a three-guard lineup is now a real consideration for Philadelphia. Any issues the Sixers suffer by playing small are a result of limitations for his teammates, not Melton, as he's proven his versatility and production are going to hold up across a wide variety of lineups.

Down the stretch of this game, it felt like Melton pulled a rabbit out of his hat every time the Pacers felt like they could land a killing blow. He hit a couple of huge threes on semi-broken possessions, tipped out rebounds for second chances when the offense bogged down, and lived up to that oh-so-fitting nickname, Mr. Do Something.

The Sixers are going to need him to play in basically every big moment this season if that's not clear by now. Hell of a player.

• I give Montrezl Harrell a lot of grief for what he can't/doesn't do, but I think there are some real benefits to playing him in that backup center spot beyond using generalities like, "He's a better pick-and-roll partner." For example, I think he's a useful passer on the short-roll, someone who is going to get the ball to an open man in the corner on time and on target. It's not something you're going to design the offense around, but it helps keep things humming when the Sixers go to bench units.

And against the Pacers, who did not play basically any defense the whole night, Harrell's brand of relentless rim running is going to be rewarded quite often. He was a problem for Indiana around the hoop all night, sealing smaller defenders and picking up some tough baskets with defenders hanging all over him.

I did not expect that small ball would fail so badly in crunch time that Harrell would be called upon for crunch-time minutes, but I suppose you learn to expect the unexpected in this line of work. Harrell came up with some huge plays in the fourth quarter and overtime, sending the home crowd into hysterics with dunks and layups in traffic, but also with his theatrics after his finishes.

This will probably earn him another few weeks of benefit of the doubt from Rivers, I'd guess.

• This felt like a sneaky great game for Tobias Harris, and perhaps it wasn't a surprising one, as this Pacers team is almost designed for him to exploit. Indiana trotted out a bunch of small-ish wings who Harris had either speed or size advantages against. He was not shy about using it, hitting the gas when they attacked him hard on closeouts, getting to the paint with an eye to either score or find an open man on the perimeter. Harris also came up with a couple of awesome dunks in this game, adding to a growing collection of poster finishes he is putting together this season.

He saved his most important moment for the final 10 seconds of the game, finishing a putback on Tyrese Maxey's layup attempt in traffic to tie the game.

• If you're going to play a small-ball lineup and switch a ton, you need a teamwide commitment to rebounding, precise communication, and an understanding of what all of your roles are (not to mention some semblance of rim protection). The Sixers had almost none of that in this game, and it allowed the Pacers to keep up with them while, in fairness, sucking worse than the Sixers on defense.

Watching the Sixers defend in the opening portion of this game, you could tell that this group hasn't gotten tons of time together yet this season. There were wide-open threes and layups conceded to the Pacers early in the shot clock with no work done to generate those shots, the Sixers apparently unaware that they needed to defend all five guys on the floor. They got away with some egregious mistakes — how you let Buddy Hield walk into an open three after you just made a shot is beyond me.

It doesn't help that Tucker was not up to the task of dealing with, well, an actual big man in Myles Turner. Turner's defensive impact might have been eaten into by forcing him to guard a guy who was basically never going to leave the corner, but on the other end, Tucker was in a rough spot, trying to compete for boards and real estate with a guy who just towers over him.

On the other hand, I have some questions about how they chose to use the small-ball lineup on the floor. For example, I thought Tucker sat in drop coverage far too much in this game, as that doesn't really take advantage of his strengths defensively. If Turner is going to make shots over your guys in the post because you switched the action, you probably should just live with that.

It was a disastrous night for Philly on defense, one that will probably lead to a few curse words in the film room tomorrow.

• Tyrese Maxey looked well on his way to another uninspired performance halfway through this game, plagued by many of the same issues we saw in his first two after returning from injury. I'm content to say he's just in the process of getting his legs back. A lot of his shots are coming up short of the target, and given how long he was forced to sit out, it's fair to assume he's going to stop front-rimming jumpers at some point.

I thought Maxey had a nice stretch to offset that in the second half, spearheading Philadelphia's bench-heavy lineups with a good blend of scoring and playmaking. He hit Thybulle on a cut for an easy finish, was the hub of the offense on a play that resulted in a sidestep three for Niang, and deposited a floater on a shot that made you think, "Alright, he's finally looking like himself."

But the defensive end was and is an absolute train wreck. Maxey was one of their worst culprits on blown rotations, and you often see his activity actually getting the best of him, Maxey stepping one way and then failing to recover in time when his man goes in the other direction. His one shining moment on that end basically saved this game, with Maxey ripping and running to close the gap to two in the final minute of regulation.

More to like in this game, certainly, still not his best.

• The end of regulation was an absolute s**tshow for the Sixers, in ways you probably wouldn't have expected. Despite having three guards on the floor together, the Sixers somehow found a way to commit an eight-second violation. Absurd.

• If De'Anthony Melton was a better finisher at the rim he might be a $20 million-a-year guy. It's wild watching him make great, smart moves to get to the basket, only to completely smoke the layup once he gets there.

• It sounded like Matt Cord was calling Andrew Nembhard "Anthony Nembhard" for about 50 percent of the game. Hopefully, this is just an example of me going deaf from the loudspeakers at Wells Fargo Center, rather than a butchering of a guy's name over and over again.

• Tucker took his undershirt off at halftime, but it didn't appear to make the positive change on his game he would have hoped for. It is crazy how little he's giving them on offense right now.