Instant observations: Sixers go down 3-0 to Celtics as Embiid melts down in crunch time 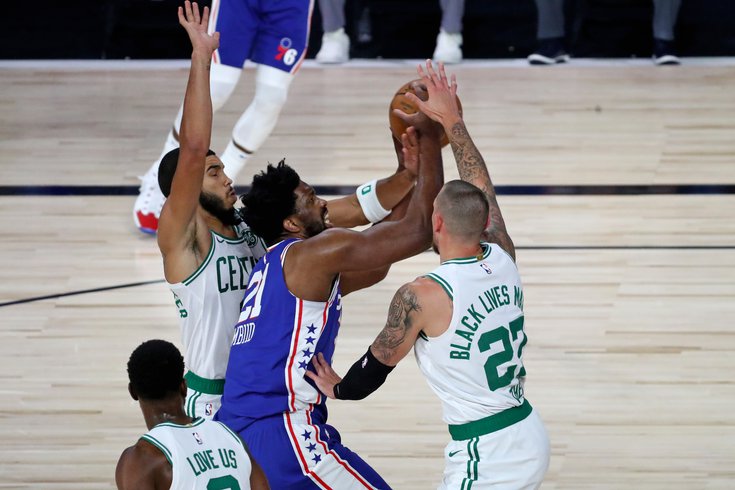 The Sixers fought tooth and nail with the Celtics for 46 minutes, but late-game errors from Joel Embiid, who had carried the team to that point, led to a 102-94 loss and a 3-0 series hole on Friday night.

• A turnaround from 2-0 has to start somewhere, and for Philadelphia, the pivot point was their pick-and-roll coverage. They didn't morph into the LeBron-era Miami Heat and start blitzing the Celtics, but Joel Embiid was a lot higher than we're accustomed to seeing him.

I don't know if I would even call it "hedging," so it's not like this was a huge ask of Philly's bigs, and it gave the Celtics' guards and wings something to think about when they turned the corner. Shots that Kemba Walker just walked into in Game 2 turned into moments of hesitation, and though he's a lot slower than Walker is, that bought Shake Milton time to get back in the picture and use his length to contest.

(And get away with a few fouls, but I digress.)

The bigger change, frankly, was Philadelphia's competitive fire in Game 3. After the Game 2 disaster, it was fair to wonder if this team was ready to pack it in and call it a season. Nobody was ready to quit, and we finally started to see the "bully ball" team that was promised.

• The leader of the brutes was, to no one's surprise, Joel Embiid. Pouring in 22 points and 10 rebounds before the first half had come to a close, he did damage from every possible spot on the floor, and the Sixers showed some decent awareness of the personnel on the floor for Boston on Friday night.

Embiid's style of attack differed depending on the matchup. With Daniel Theis in the game, there was a lot of back-to-the-basket play, or Embiid crashing the offensive glass for easy buckets or fouls drawn. With Enes Kanter in the game, Alec Burks ran pick-and-rolls and pick-and-pops with Embiid until Boston's slow-footed center tipped his hand, and one of the two guys (most often Embiid) would end up with an open jumper out of it.

The big fella was a little too rambunctious on defense at times, and he damn near decapitated Marcus Smart on a couple of drives to the basket. But you would always rather see him playing with an edge and aggressiveness when compared to the alternative. He is the pace-setter for this team, and that's a responsibility he has to take deadly serious.

It wasn't all good, however, and we'll get to that below.

• Josh Richardson had an ugly night shooting the basketball, and he still hasn't shed the erratic decisionmaking that has plagued him in Orlando. But this was pretty easily the best defensive performance he has had during the restart, made all the more impressive by how little Matisse Thybulle contributed on Friday night.

It does not escape this writer that Kemba Walker has been better whenever he's free from Richardson's defense in this series. Richardson's gambling, which can sometimes be too erratic seemed to be connected to an exceptional understanding of what Boston wanted to do on Friday night. I think he had two or three of the best defensive plays he has had all season in this game.

With the game about to slip away in the fourth quarter, Richardson's energy was the difference between the Celtics blowing it open and Philly having a chance down the stretch.

• Shake Milton didn't give Philadelphia anywhere near enough offensively, and he had some costly mistakes down the stretch that showed his youth. But he showed me something about his toughness in this game, coming up with some tough buckets down the stretch by attacking Boston at the rim, not usually his specialty.

• We're always talking about reasons why the Sixers don't win without digging too deep on Joel Embiid and Joel Embiid's weaknesses. But look, this much is true: Boston's star players made plays down the stretch, and Embiid blew his chances to impact the game. That's how games are won and lost in the NBA, and he simply isn't good enough right now.

Yes, it's hard to play offense out of the post, but he makes it look harder than it has to in the clutch. Yes, he gets a lot of attention shaded his way, but he does a poor job of dealing with it. All the qualifiers about inexperience that followed him early in his career are off the table now. He does not deliver in the clutch the way he should, and until/unless he does, the ceiling on this team is not as high as people think.

This organization, as I wrote the other night, has dozens of problems to deal with. None may be bigger than the fact that Embiid has not turned into the superstar people believed he might be one day. His story hasn't finished being written, but superstars don't make the mistakes he did down the stretch tonight anywhere near as frequently as he does.

• Boy, it was not Alec Burks' night on Friday night. For that matter, it was not his night on Wednesday, either, and the Sixers badly need him to rediscover his form to boost their bench scoring. He wasn't a whole lot better on the defensive end, and a brain cramp on defense led to an open Jayson Tatum three early in the fourth quarter, a costly mistake in a tight, offensively-starved game.

With Burks unable to get it going, the warts of this Sixers offense are a lot more glaring. They simply do not have guys who are able to win one-on-one battles, which is a really tough hurdle to overcome when you're playing playoff-caliber defenses. When Embiid ended up in foul trouble in the third quarter, the Sixers had no reliable source of offense because they couldn't create separation in the first place.

Another layer of complication: once Embiid was out of the game, the Celtics were comfortable switching everything. Teams with better personnel, like these same Celtics, relish those opportunities to attack slower or smaller players depending on the matchup. Philly is just forced to reset the possession, and by reset the possession I really mean they end up burning clock.

(By the way, the last two games highlight why I was skeptical of Burks being a for sure rotation player here. Ideally, you pull him when he doesn't have it going and turn to somebody else. Unfortunately, the fallback plan for Philly would be giving Raul Neto minutes, and we've seen how that goes.)

But you simply can't overlook how poor he was offensively just because he played hard. Paying a guy more money doesn't make their makes or misses any more or less valuable, but this is the guy who was committed to as if he was final piece to aid Embiid and Ben Simmons in their quest for a title. Instead of looking like a capable No. 2 with Simmons out, he has looked completely out of his depth, overwhelmed by a pair of Boston wings who have absolutely dominated him in this series.

• During the middle portion of the game, I thought Al Horford did an excellent job as the backup five and did a lot of the things we've grown accustomed to seeing him do against the Sixers. Unfortunately, he had some of the worst mistakes of any guy on the team when it mattered.

Choose your fighter: were you madder about the contested corner three he took with plenty of time left on the shot clock or the stupid foul on Jaylen Brown that put him on the free-throw line for three shots? It's hard to choose, but I'd probably lean toward the first one being worse. At least in the case of the second play, you could blame the coach for asking him to take that assignment and the front office for thinking this partnership would work.

• Boy, this is not the series for Furkan Korkmaz. Somehow ended up a massive positive from a plus-minus perspective, which shows how valuable that stat is most of the time.

• Philadelphia's first-half felt like a good sign weighed against the expectations everyone had coming in, but it was a little disappointing within the game's context. After Jayson Tatum picked up his third foul before the first quarter ended, you would think that would open the door for the Sixers to seize the game and take a lead before halftime.

You would be wrong. Outside of Embiid's strong half, it was a pretty disastrous showing for the Sixers anytime they attempted to score the basketball. The rest of the starting lineup combined to shoot 9/30 in the first half, including ghastly lines of 2/9 and 1/7 for Josh Richardson and Shake Milton respectively. That's just not going to get it done.

(If there was a silver lining, it's that Richardson was aggressive hunting threes, which is something he needs to do every single game. The results aren't always going to be there, but that can't stop him from being in attack mode. They don't exactly have many great options from deep.)

• Boy, you do not ever get through a Scott Foster officiated game without his presence being felt. Shaky calls on both teams, inconsistent application of the rules, obvious missed calls, this one had it all from an officiating perspective. It certainly wasn't an advantage for Philly, but it definitely took away from the game's watchability.