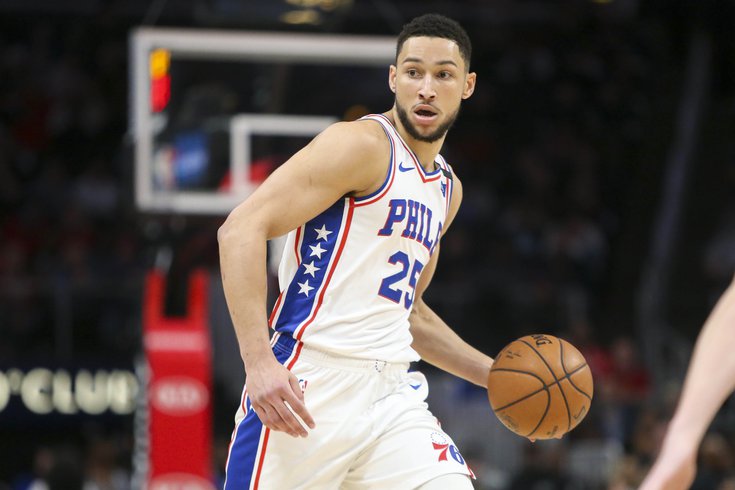 Ben Simmons took a pair of threes, and made one, in the Sixers first scrimmage in Orlando.

The Sixers ran out to a 26-point lead at halftime in their Orlando scrimmage opener, Ben Simmons attempted multiple threes, and Philadelphia's bench players would eventually lead them to a 90-83 victory over the Memphis Grizzlies. All things considered, a successful first game back after a long hiatus.

• Ben Simmons attempted a contested three from the corner, which a lot of people would tell you is the most important thing that happened in Friday's game.

Simmons missed it but it is a good sign that he was willing to take it. pic.twitter.com/qssIlHpWYO

This isn't even the sort of attempt people have been begging for from Simmons. Kyle Anderson is playing relatively close and even gets a decent contest in. Simmons decided to let it fire anyway, which is a quantum leap forward for him.

Simmons had an encore performance later in the game, this time nailing a three from the corner. The paradigm shift Brett Brown spoke of this week? Maybe that's a real thing. It's not like Simmons has ever been incapable of making shots, so if the mentality truly has changed, look the hell out.

But let's set aside shooting for a second. Simmons may not have been the point guard, but the Sixers ended up running a ton of their offense through him anyway, predominantly with Simmons getting the ball at the elbow. It's a spot they like to run plays through generally, but getting Simmons the ball there is a game-changer. He sprayed the ball all over the floor to the tune of nine first-half assists, and any team that tries to crowd him in the paint could easily have it turned against them.

And the most important thing: he looked healthy after recovering from a back injury and going through a long layoff.

• Shake Milton passed his first test with flying colors on Friday, looking right at home in a starting lineup that had never played together outside of a practice setting. Bumping Al Horford out of the starting lineup only means something if the new group can make the most out of it, and they're off to a good start.

Comfortable is probably the best word to describe how Milton looked on Friday. He wasn't just the point guard in name only, he initiated a lot of offense through pick-and-pops with Embiid, and the two showed decent chemistry for guys who have spent so little time on the floor together. Sprinkle in a made three and solid defense, and you couldn't have asked for more out of him.

Brown has said he has every intention of trying to make this group work, and Milton is making it easy on him so far.

• We didn't get to see the dominant, post-heavy antics of Joel Embiid that everyone was promised. Frankly, he wasn't at his sharpest when he did get the ball on the low block, and he'll have to get into gear quickly. But if you're looking for someone who is going to crush him for shooting a lot of jumpers, you already know to look elsewhere.

When Embiid is just launching a bunch of lazy trail threes, that's worth discussing, but he was involved as a screener in pick-and-pops & two-man game, using his big frame to create separation for ballhandlers, often leading to open looks. It's a style of play he has been reluctant to participate in at times, but it is critical for his evolution into a multi-faceted weapon.

Defensively, outside of maybe one or two errant possessions, Embiid's reads were sharp and he used his size to make it difficult for Memphis to find room in the paint. That is ultimately more important than his offensive efficiency, and their backbone was strong around the rim.

• While we're on the subject of defense, these guys were clearly ready to get after it as a unit. Cohesion wasn't always there, which is understandable after a four-month layoff, but activity and effort were excellent from the jump, from their best players down to the end-of-the-rotation guys.

Embiid and Simmons led the charge for the starters, Josh Richardson made life tough for Ja Morant, Matisse Thybulle came in and got disruptive, even Furkan Korkmaz, often crushed for being a defensive liability, came up with a great hustle play to create a Grizzlies turnover in transition.

The Sixers have talked extensively about coming down to Orlando with the right mindset and the competitive fire they've had in practice, and they don't seem like they were blowing smoke.

• I may have underestimated Alec Burks' chances to get minutes in the playoffs. With the team running more pick-and-pops with their bigs, Burks is a natural beneficiary, and he found some good looks for himself without much fuss on Friday. Good first game.

Really, most of the guys competing for bench minutes (except for perhaps Mike Scott) looked solid in the scrimmage opener. Thybulle was the biggest standout, partially because of his highlights but mostly because he was as active and disruptive as everyone remembers on defense.

They don't have an embarrassment of riches behind the big guns, but they have NBA talent, which is not something they've always been able to say in recent years.

• I don't have much commentary to add to these plays, but please enjoy a Matisse Thybulle poster dunk and a no-look lob from Simmons to Tobias Harris:

HEY GRIZZLIES THIS IS MATISSE THYBULLE, WELCOME TO MY VLOG. pic.twitter.com/esir6ovEgc

A FILTHY NO LOOK OOP BY BEN SIMMONS THE RUST IS ALREADY GONE pic.twitter.com/NlCwsGxlJd

• One last thing — good minutes from Norvel Pelle in the second half, including his first made three. If he sees the floor for Philly in any setting other than garbage time, something has gone wrong in Orlando, but good for him.

• They were up by 26 points at the half when all their starters were playing, do you guys really want me to get hypercritical?

• On the plus side for Al Horford, he looks a heck of a lot better physically than he did last we saw him. Horford got up and down the floor well in transition, got his fingertips on a couple of lobbed entries to Jaren Jackson Jr., and he should settle into a nice role with the second unit.

Even with those improved bursts, though, Horford's ability to explode and finish just wasn't there. He smoked a couple of relatively simple layups, got moved off of his spot by Memphis' bigs a little too easily, and let's be frank, Jaren Jackson Jr. went past him like he was standing in quicksand a few times.

It's one game, but since this should be the healthiest all these guys will be, and the youngest Horford will ever be moving forward, seeing all the old issues in a new setting is a bummer.

We did, by the way, see Horford and Embiid share a frontcourt together, and it didn't look like a total disaster. But you did see why playing them together makes little sense — Horford was basically completely uninvolved in the offense in those minutes, and on the lone post touch he got, he committed an offensive foul. He's not spacing the floor and he's mostly just taking up real estate in these looks. We'll see if they disappear in the playoffs.

• The microphone setup NBC Sports Philadelphia was using for this game was...interesting. Leaning into the in-arena sounds is one thing, but hearing loud thuds every time the ball is dribbled? No bueno.

(As a matter of courtesy to the NBC folks, this could be an NBA decision for all I know. Regardless, this is not the game noise anyone wants to hear.)