Instant observations: Sixers' hot start vs. Blazers carries them to another road win 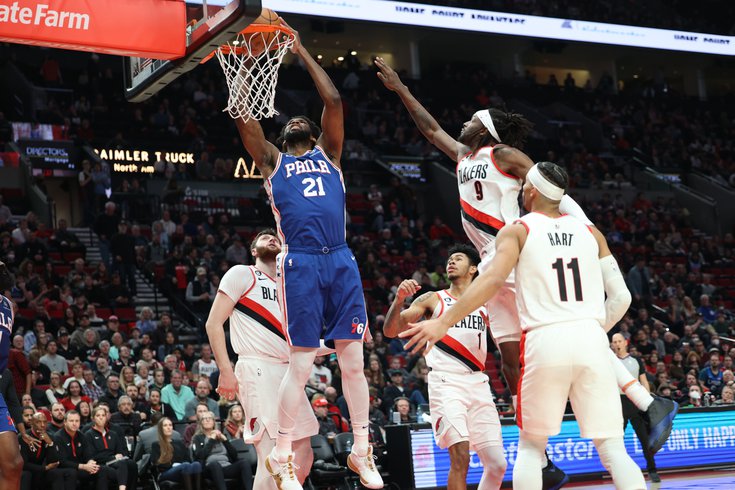 The Sixers moved to 4-0 on their current road trip out west with a 105-95 victory over the Trailblazers. Another 30+ point game for Joel Embiid and a triple-double for James Harden led the way, naturally.

• If I've said it once, I've said it 1,000 times this season: when Joel Embiid comes out and sets the tone in a game, his teammates have no choice but to fall in line. Unlike in their game against the Clippers two nights prior, it was all business from the start for the big man.

The surest sign that we were going to get full-go Embiid was his commitment to running the floor early. He's more than capable of handling Jusuf Nurkic in a one-on-one battle, but the quicker you can knock his big body out of the game, the easier it's going to get from a workload perspective. And by getting down the floor in transition, Embiid drew Nurkic's foul just a few minutes in, sealing his counterpart off and forcing him to swipe down carelessly at a layup attempt.

Weirdly enough, those were the only free throws he shot the entire first half, but that felt like a product of their pick-and-roll combos absolutely destroying Portland. With the Blazers sitting in a lot of drop coverage, James Harden was able to find Embiid at the free-throw line for an open jumper basically whenever they wanted. Philly's star duo is hard enough to stop in their favorite action when a team designs a gameplan around stopping it, but Portland hardly seemed aware of what the Sixers were going to come in and do.

And that's not taking anything away from the Sixers — one of the gripes you could make about them over the years is that they didn't always punish teams hard enough for their weaknesses, or put away a struggling team early in a game. Philadelphia threw a series of haymakers to open this one, seizing the opportunity Portland had handed them. It's always nice to see a bit of killer instinct, especially in a building where the Sixers have struggled over the years.

• Perhaps I'm burying the lede by only getting to defense five paragraphs into the story. This is the most connected the Sixers have looked in a while on that end of the floor, and they managed to have their cake and eat it too, turning all their attention on Damian Lillard without letting Portland's other guys get much of anything going.

It took the whole team to make that happen. There was Embiid, playing up at the level and showing Lillard size to get it out of his hands. There were timely rotations and well-timed tags from the low man, whether that was Tobias Harris, P.J. Tucker, or even James Harden. De'Anthony Melton came flying in for some excellent, last-minute plays around the paint, saving possessions that looked like they would go in Portland's favor. Hell, even Montrezl Harrell came up with a steal at midcourt, stripping Jusuf Nurkic and nearly drawing a clear-path foul after tracking the ball in transition.

• This will go down as probably the 25th time I've written that Tobias Harris had an understated, underrated game for the Sixers and that Georges Niang hit a few massive threes at a pivotal swing moment in the game. And in some ways, that's the mark of a really good team — you've grown to think you can count on key contributions from the non-star contributors on the roster, with Harris supplying the fill-in production and Niang giving Philly a big lift on the second unit.

Elsewhere in the depth department, Shake Milton had another good offensive night, with his midrange shotmaking basically the only positive on offense in a dire stretch for Philly during the third quarter. Steady production from Milton has been a big deal for this group all season, and he's showing no signs of slowing down.

• Whether you're a supporter of making Tyrese Maxey the sixth man or not, you have to admit he has looked damn good as the bench captain over the last couple of nights. Maybe it's pure coincidence and Maxey is simply getting his legs under him again, but whatever the reason for it is, he has looked like a different guy out there.

The Sixers were already rolling when Maxey checked into this game for the first time, and perhaps the argument for bringing him off of the bench is that he's coming in with a more selfish mentality. Rather than asking him to spot up and play off of the Harden/Embiid combo, young Maxey checked into the game and took center stage. Working off Embiid ball screens, No. 0 kept calling his own number, hitting a pair of midrange jumpers to work himself into a rhythm. With Portland anticipating another one, Maxey broke to his left before another Embiid screen arrived, cashing a short floater for two more points.

One of the things that felt noteworthy was how active Maxey was after checking in — Rivers had him moving quite a bit, including on the Iverson cuts we saw them use quite often with Seth Curry on the roster. The result was Maxey receiving the ball with a head of steam already built up, allowing him to burst into space for easier finishes.

If you were nitpicking, maybe you want to see Maxey getting all the way to the rim more often, depositing a few more layups instead of settling for runners and floaters. But that would have been a gripe for a game where he was cold, not a night when he had it rolling and felt like a threat to make any touch shot he lofted toward the rim.

Getting him rolling when Embiid suits up has often been a challenge, but by reprogramming his mind in this new/evolving role, you might get the best of both worlds. If that's the case, look out.

• One of the nice things about swapping Ben Simmons for James Harden at point guard is that the latter can continue being an impactful playmaker even when his scoring touch is off or nonexistent for the night. Defenses are basically always playing Harden as if he's going to attack them whether that's actively happening or not, and he has become so good over the years at waiting out the opponent until they are dead meat when the move finally comes.

It's what feels special to me about his playmaking — his passes nearly always come on time, but also at the moment when the defense is least prepared to counter him. The pocket pass to Embiid comes as the opposing big has taken his last fatal step toward the rim, with Embiid often able to take another step or two toward the rim before letting the jumper go. If anything, I thought Embiid left points on the table in this game, with Harden's passing deserving a few more assists over the course of the game.

And Harden offered juuuuust enough scoring against the Blazers, capitalizing on transition opportunities and favorable matchups to pad a few Sixers runs and break up mini Blazers barrages. His feel for the game was on point, I thought.

(Didn't love his final six minutes or so of this game, but they are just six minutes of a long, pretty good game.)

• You thought I forgot about Matisse Thybulle in the defensive section? Come on, I may be a skeptic, I'm not a hater. But talk about great timing from Thybulle, who had a good outing after I wrote about the pros and cons of trading him.

This was a game people will (rightfully!) hold onto when the idea of moving on from him is brought up. As the Sixers went to their bench and brought in a cast of iffy defenders to keep building on their lead, Thybulle was a needed piece of chaos and length to throw at Lillard. Portland's star guard had a moment or two where he left Thybulle in the dust, but there were far more examples of Lillard being flummoxed by Thybulle's wingspan and activity, throwing off his shot attempts and junking up a Blazers offense that didn't have much going to begin with.

Thybulle had a quiet box score game, and he somehow took and missed a floater from next to the rim, but this was a performance I thought was much better than you could glean from his line.

• Everything about how Embiid's foul situation was handled was wrong.

I always err on the side of letting a star play through those moments, but especially when you're winning what is basically a blowout and have a good chance to put the starters on ice for the fourth quarters. Doc Rivers decided otherwise, and the Sixers paid for trying to ride the all-bench lineup for far too long in the second half. Admittedly, that group crushed during their time together in the first half.

• Please, Doc, some Paul Reed minutes sometime soon. Not sure how many more defensive possessions I can watch Montrezl Harrell botch before I lose my mind.

• Seriously, if the Sixers would simply run offense instead of playing ball control and isolating, a lot of their fourth-quarter lulls wouldn't happen. You can't lose any sense of aggression or purpose when you have a decent-sized lead in the fourth quarter.

Bad Harden execution against traps down the stretch also plagued Philly, with Harden committing one particularly egregious turnover out of a timeout with a few minutes left.

• I try to be fair to all the teams the Sixers play and judge them by their body of work, rather than one-off performances against Philly. But man, Portland looks to be in a bad, bad place right now, because I can't think of a single thing they did right in this game, and a quick glance at their recent run of form doesn't turn up much better.

• P.J. Tucker complaining about a moving screen call while he had both arms out like an offensive lineman to create space was absolutely hilarious. Come on, bro.

Related, but there should be a rule that you're not allowed to argue a call and risk getting a tech if you have zero points in a game. Leave the politicking to somebody else.

• Embiid grabbing his knee after falling to the floor following a dunk probably inspired a few near heart attacks back home in Philly. He was up and smiling at the line moments later. The man has a flair for the dramatic, that's for sure.