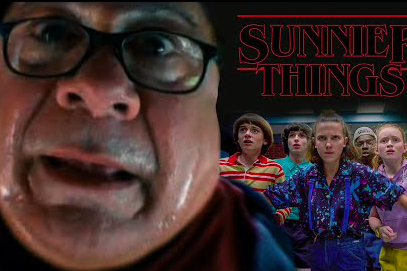 Two of television's most popular shows — "It's Always Sunny in Philadelphia" and "Stranger Things" — are the subject of a mashup by "Funny or Die."

If you were asked to think of the two most polar opposite TV shows in 2019, no one would argue if your response was "Stranger Things" and "It's Always Sunny in Philadelphia."

One is a sci-fi thriller with comic relief, and the other is misanthropic comedy stretched to its limits. Only the character of Frank Reynolds is grotesque enough to possibly warrant a place in Hawkins, Indiana.

And that's exactly what "Funny or Die" has offered up in a new mashup of the two shows.

Instead of searching for Billy Hargrove, we find Eleven scouring her brain to determine the whereabouts of one Frank Reynolds. Apart from the physique, they actually share more in common than you might think.

Not a bad retrospective on some of the insane things that Frank has done over the years. He fits almost too neatly into the plot of the third season of "Stranger Things."

Season 14 of "It's Always Sunny in Philadelphia" debuts Sept. 25 on FXX, so we can expect to plenty of new highlights from Frank this fall.