The landmark, part of the shuttered B.L. England Power Plant near Ocean City, was installed in 1974 to prevent Great Egg Harbor Bay from overheating 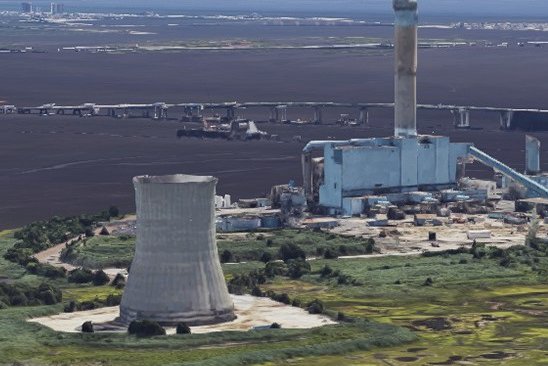 The cooling plant at the former B.L. England Power Plant in Upper Township, seen in the foreground of the photo above, has been a Jersey Shore landmark since 1974. The implosion is part of a long-term plan to redevelop the area at Beesley's Point.

The decades-old cooling tower at the former B.L. England Power Plant was demolished Thursday to make way for future development at Beesley's Point, including a possible marina with a hotel, restaurants and shops.

The implosion of the 208-foot-tall tower took  place at 9:30 a.m. and took under 10 seconds to come down. The project was handled by Controlled Demolition Inc. on behalf of Beesley's Point Development Group, which purchased the property last year.

The site was closed to the public on Thursday morning, but cameras crews in the area caught the demolition on video.

The demolition took months of preparation, including asbestos treatment which Upper Township said was completed without any outstanding infractions from the New Jersey Department of Environmental Protection.

Dust suppression equipment was run during and after the implosion to help contain the fallout. The point of implosion also was wrapped in chain link fence and fabric to prevent any debris from leaving the area. The closest home to the cooling tower site is 3,250 feet away, officials said. The closest school is more than a mile away.

The power plant, at 900 North Shore Road, dates to 1961. It opened with four diesel electric generators and then added a coal-fired plant the following year. The cooling tower was installed in 1974 to prevent the Great Egg Harbor Bay from heating.

The plant was decommissioned in May 2019 after years of efforts to comply with the New Jersey Department of Environmental Protection, which had said the plant violated the Clean Air Act. The aging facility's performance standards were behind newer plants and it lacked adequate pollution controls.

RC Cape May Holdings acquired the plant in 2007, but the company's plans to upgrade the facility for longterm use never materialized. Some of its older units were shut down in the last decade and the plant was later sold to Beesley's Point Development Group.

Wildwood Video Archive reported that the cost of the demolition of the plant's structures is upwards of $13 million and the goal is to have the site cleared by 2024. A specific timeline has not been set for the eventual demolition of the plant or the smokestack, which is a visible landmark for motorists entering Cape May County from the Garden State Parkway.