Eagles' Jordan Mailata revealed as contestant on 'The Masked Singer' 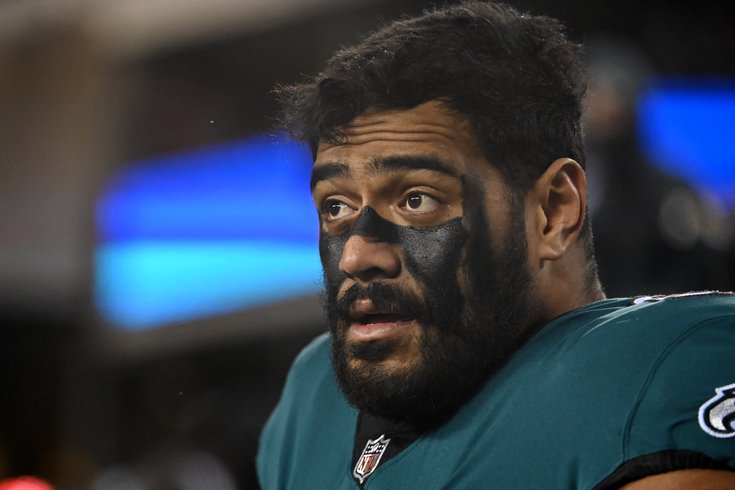 Eagles offensive tackle Jordan Mailata put his singing skills on display as a competitor on FOX's 'The Masked Singer.'

Jordan Mailata's musical talent is no secret to Eagles fans. Now, the rest of the country knows how well the offensive tackle can sing.

Mailata was revealed as a celebrity contestant on FOX's "The Masked Singer" on Wednesday night. The left tackle was unmasked after being voted off by a panel of celebrity judges and the audience.

"The Masked Singer" is a reality singing competition in which celebrities perform in costumes that conceal their identities. Each competitor provides clues to the judges to give hints as to who he or she is.

The judges are then tasked with evaluating each mystery singer's performances and voting on which competitors move on. The celebrity remains a secret until he or she either is eliminated or wins the competition.

Mailata sang "Classic" by MKTO on Wednesday's show. In previous weeks, the former seventh round draft pick performed "Perfect" by Ed Sheeran and "Wanted Dead or Alive" by Bon Jovi.

Mailata, who came on stage Wednesday sitting on top of a car, was unrecognizable in his "Thingamabob" outfit. Mailata's performance also drew some love from the Eagles.

Mailata, in a disguised voice, made his case to the judges for why he should advance to the final round.

"What I do, for my job, not everybody would think that I can do this and there's so much more to me than meets the eye and that's why I wanna go to the finals," Mailata said. "I wanna keep showing, I wanna keep representing."

However, Mailata's strong showing in the competition wasn't enough for him to move on. He and actor Jorge Garcia, who performed as "Cyclops," were both eliminated.

Then, with some help from host Nick Cannon, Mailata took off his mask to reveal who he was, leaving the judges shocked that those dulcet tones came from an NFL player.

"I did a good job hiding my accent, didn't I?" Mailata said. "Thank you so much for welcoming me here. This has been an incredible experience for me."

In a post-show interview, Mailata revealed that he began watching "The Masked Singer" when the competition debuted in 2019 and had wanted a chance to perform.

"That was kind of a big inspiration for me and kinda got the confidence to come on the show and try to show what I'm about," Mailata said. "Show the monster on the outside, but also show that I'm more than an athlete on the inside."

While Mailata said he was bummed to get eliminated, he was grateful for the experience to show off his singing prowess.

"My time here on the set and on the show has been unbelievable," Mailata said. "This is an atmosphere that I will come back to every single time. The people here have made this experience unforgettable. It's honestly been a wild trip and a dream wearing the costume and having to meet everybody and competing. It's been a fun journey."

Mailata also said he had to stay disguised while traveling between the hotel and the studio to make sure he remained undercover.

Before signing off with a "Go Birds baby" at the end of his interview, Mailata shed some light on how he thinks his teammates in Philly will react to his performance.

"I think my teammates are gonna be like, 'Why did you come to play football? You should've been singing your whole life.'"

Mailata's beautiful singing voice is nothing new to Eagles fans. His musical gift was first noticed during his rookie training camp in 2018.

During training camp last summer, Mailata performed a rendition of "Tennessee Whiskey" during a team meeting.

If it wasn't clear enough yet, Mailata has a musical career waiting for him once his playing days are done.

Mailata's reveal on "The Masked Singer" comes after center Jason Kelce sung the national anthem for charity ahead of the Sixers-Nuggets game last week at the Wells Fargo Center.

Maybe we need an Eagles offensive linemen singing contest, although Mailata would be the heavy favorite to win.