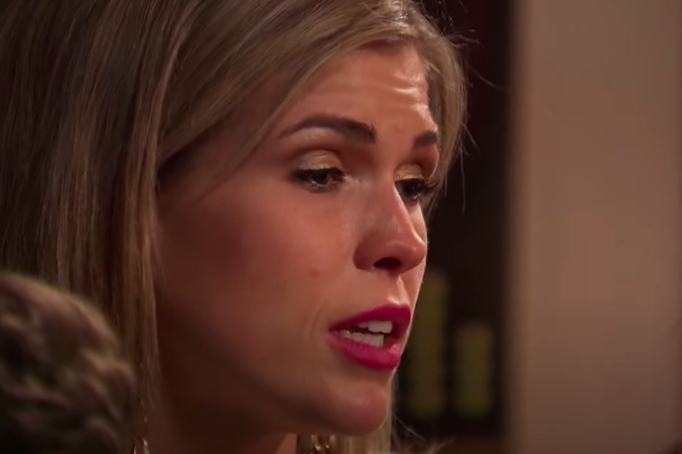 Screenshot via YouTube/Bachelor Nation on ABC

Julia Rae Schlucter's run on 'The Bachelor Presents: Listen to Your Heart' is over after four weeks. The Wayne native chose Brandon Mills over Sheridan Reed, but her performance with her new romantic interest failed to impress the judges.

Wayne native Julia Rae Schlucter’s run on “The Bachelor Presents: Listen to Your Heart” is officially over after she was dramatically eliminated from the reality television show on Monday’s episode.

Schlucter starts the episode happy with how she and fellow contestant Sheridan Reed performed their song during last week’s show. Reed feels his connection with Schlucter is great, and that their relationship has real potential.

But bad news for Reed because host Chris Harrison then brings the remaining contestants together to tell them that they’re going to split some of the couples up and have them go on dates with others in the group to see if their current relationships are real.

Schlucter gets selected to go on a date with fellow contestant Brandon Mills, who she has been flirting with on and off during the show. Needless to say, Reed is not thrilled. Feeling anxious and uncertain, Reed believes Schlucter deserves someone like him—not Mills.

Fellow contestant Savannah McKinley has been together with Mills up to this point in the show, and she believes that he will be faithful to her and not do anything on his date with Schlucter that puts their relationship in jeopardy.

Schlucter and Mills go on a date at The Roxy Theatre in Los Angeles and are tasked with writing and performing a song together. Things go well, and they're seen kissing after the date. It leads Schlucter to admit that she’s falling for Mills and wants to be with him and not Reed.

When Schlucter arrives back at Bachelor Mansion, she and Reed have a conversation – and it doesn’t go well at all. Reed is hopeful that Schlucter’s date provided clarity that she wants to be him, but that’s not what he finds out.

Schlucter starts to cry and can’t get the words out, causing Reed to get more agitated. Schlucter finally admits she can’t be with Reed anymore. He starts crying, but he ultimately handles it with class. He wishes her the best and hugs all the other contestants before leaving.

Meanwhile, Mills has a conversation with McKinley that somehow goes even worse than Schlucter and Reed’s discussion. Mills admits that he has developed feelings for Schlucter after their date, causing McKinley to feel betrayed. McKinley walks away from the conversation crying.

But Mills seeks her out and says he wants to work things out with her. After more arguing, McKinley says she doesn’t want to be a second choice and that she’s done with him. Having no interest in working things out, McKinley leaves the show.

Now officially a couple, Schlucter and Mills are given “We Belong” by Pat Benatar to sing together. But before the performances begin, more drama arises.

Mills is asked by another contestant, Natascha Bessez, if he would have chosen McKinley over Schlucter if she was willing to work things out with him. Mills nods "yes."

Bessez then goes to Schlucter before the couple gets on stage at The Novo in Los Angeles and tells her what Mills said. Schlucter gets upset, accusing Bessez of trying to break them up and send them home.

Schlucter confronts Mills about what his true feelings are, but he’s unable to give her a clear answer. Schlucter feels uncomfortable to perform and that something is off between them now.

Schlucter and Mills sing in front of the judges and audience, and while they sound good, the judges can tell things aren't right between them. The judges, which include musician Toni Braxton, don't like their body language during the performance, and even go as far as to say that they looked like they were fighting.

Schlucter is extremely upset with both their performance and with Mills, and accuses him of turning it into a solo performance. It causes Schlucter to question if she made the right call choosing Mills over Reed.

Schlucter then calls out Bessez in front of the entire group and says that what she did before their performance was a dirty move. Bessez insists that she wasn’t trying to sabotage them, but admits that she should’ve brought it up at another time.

But all of Schlucter’s efforts to save herself are too little, too late. Schlucter and Mills are the only couple to not receive roses at the end of this week’s episode. Four couples now remain on the show going into Episode 5 next Monday.

While Schlucter is now eliminated, her four-week run was nothing short of dramatic.