The drama gets messier during Episode 3 of the 'Bachelor' spinoff 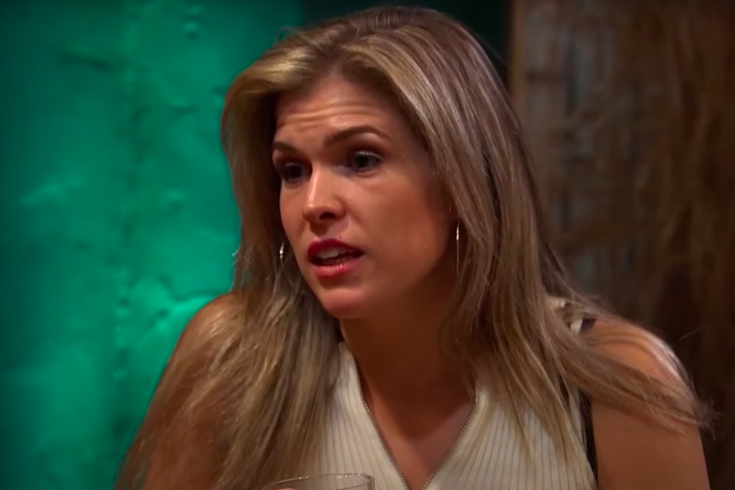 'Listen to Your Heart'/Bachelor Nation on ABC/YouTube

Julia Rae Schlucter is going for two guys at the same time on 'The Bachelor Presents: Listen to Your Heart.' The love triangle gets messier on Episode 3 of the new TV show.

We’re now three episodes into the inaugural season of “The Bachelor Presents: Listen to Your Heart” and Wayne native Julia Rae Schlucter appears to be the unofficial villain of the show.

Her efforts to find love have been hampered much by her own doing, as she’s pursuing two different men — fellow contestants Brandon Mills and Sheridan Reed — at the same time.

Last week, Mills gave a rose to contestant Savannah McKinley but made it clear to Schlucter – who was given a rose by Reed – that he was interested in keeping communication lines open between them.

At the start of this week’s episode, Mills admitted to Schlucter that he picked McKinley because he knew that Schlucter would be getting a rose from Reed, and that McKinley likely would have gone home had she not received a rose from him.

He then said that he wants to work things out with Schlucter and keep his options open with both women, but it begs the question: Who did Mills really want to give a rose to last week?

Meanwhile, Reed believes that Schlucter will not be able to connect with Mills on the same level that she can with him, especially once the musical aspect kicks in. But while he trusts that their love of music will take their relationship higher, Reed admitted that he’s still concerned.

And this is when things get messier. Schlucter decided to share the details of her conversation with Mills with McKinley, causing McKinley to have doubts about going forward with him.

The program’s host, Chris Harrison, gave each couple on the show the option to continue together and figure things out, or go home. After discussing their relationship, McKinley and Mills decide to move forward together, leaving Schlucter upset and feeling as though Mills wasn’t being honest. She ultimately decides to stick around with Reed, although she’s clearly conflicted and not happy.

Each remaining couple on the show then prepares to perform in front of the other contestants and a group of judges. Schlucter and Reed are paired together to sing “As Long As You Love Me” by the Backstreet Boys.

But it’s clear that she’s not nearly as into it as he is while they're practicing. Schlucter keeps rolling her eyes and looking away as he sings. She also keeps saying how hard it is to be working with Reed while being in the same house as Mills, who she clearly likes more.

This leads Schlucter to confront McKinley and tell her that she almost left because of her. She then accuses McKinley’s relationship with Mills of being disingenuous.

Each of the seven couples then perform their songs in front of this week's judges, musicians Kesha and Jason Mraz. The judges are tasked with grading the singers on both their musical performance and connection during the song, then deciding which couple will go home.

After Mills and McKinley’s performance, the judges don't feel as though their chemistry is real – which Schlucter loves.

Meanwhile, Schlucter and Reed are applauded by the judges for their performance and the connection they showed, despite the fact that Reed is far more into the relationship than his partner. There's no denying they sounded pretty good together on stage, though.

Are you hearing this?! Now this is a cover we're all here for 🙌 #ListenToYourHeart pic.twitter.com/kZ19KUiQ6j

At the end of the episode, both couples received roses from the judges, meaning that all four contestants will be back next week. But given the judges’ comments about Mills and McKinley, Schlucter seems hopeful that this could cause Mills to fully acknowledge his feelings for her.

It’s safe to say that the drama is sure to continue during next week's episode. Below is a sneak peak of what to expect.