Three takeaways from 'Here's the Deal,' Kellyanne Conway's memoir about the Trump administration 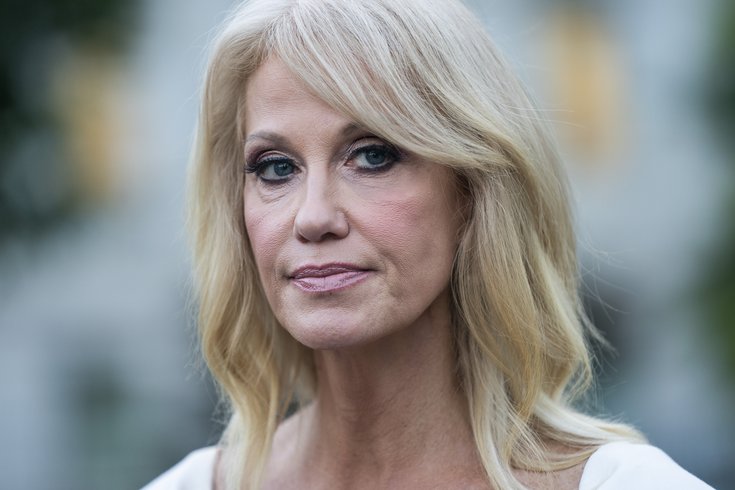 Kellyanne Conway's political memoir, 'Here's the Deal,' details her childhood in Camden County, her marriage to Lincoln Project founder George Conway, and her time in the Trump administration.

Kellyanne Conway frequently toes the line between loyalism and criticism of Donald Trump in "Here's the Deal," her new memoir about her time as a political advisor to the former president.

The book, which was released May 24, details much of Conway's life, from her humble roots growing up as the daughter of a single mother in Atco, Camden County to her early career as an attorney, political consultant and cable news "talking head."

Conway's childhood story is no secret — she has told it repeatedly, from cable news interviews during her tenure in the White House to a 7,000-word New York Magazine cover story in 2017. Though she frequently talks of being left by her father as a child, she has avoided talking of her maternal grandfather, an alleged mob associate.

In the brief opening of her 506-page political tell-all, Conway wrote that she was supposed to become a Democrat based on her upbringing and the women who surrounded her during the "golden age of the women's liberation movement."

She wrote that she was primed to support Geraldine Ferraro, an Italian-American Democratic congresswoman who was chosen as Walter Mondale's running mate during the 1984 presidential election. However, after seeing Ronald Reagan speak at a rally in Hammonton just months before the election, she "caught the political bug" and shifted her party ideology.

The political consultant's book is certainly not the first of its kind — several other high-profile members of the Trump administration have written books about their time in the White House, attempting to provide readers with a closer look into Trump's life and mind, particularly during his first campaign and throughout several well-known moments during his presidential term.

Here are three key takeaways from "Here's the Deal," the latest in a still-growing collection of books about the Trump administration.

Trump's campaign team 'failed to get the job done,' which led to his re-election loss in 2020

Since joining Trump's campaign team in 2016 and becoming the first woman to run a winning presidential campaign, Conway has remained a Trump loyalist in nearly every sense of the word. In one significant twist, though, the political consultant noted that Trump's election loss – and his subsequent denial of the results – was the result of his re-election campaign team promising him proof of election rigging.

Conway acknowledged that the former president lost the 2020 presidential election. But rather than encourage Trump to admit defeat and concede, many campaign staffers encouraged Trump to insist the election was rigged and declare that he won, she wrote. That kickstarted months of Trump supporters and Republican lawmakers propagating false claims of widespread election fraud. She elaborated:

"The team had failed on November 3, and they failed again afterward. By not confronting the candidate with the grim reality of his situation, that the proof had not surfaced to support the claims, they denied him the evidence he sought and the respect he was due. Instead supplicant after sycophant after showman genuflected in front of the Resolute Desk and promised the president goods they could not deliver."

Conway claimed she may have been the first person close to Trump to tell him that he really did lose the election. Of the former Trump aides and associates who have published books about their time spent in the administration, Conway is one of the only people to admit that claims of election fraud were false.

Trump denied Conway's claims on his social media platform, Truth Social, after the book was published. He said Conway never told him that he lost the 2020 presidential election, adding that if she had, "I wouldn't have dealt with her any longer — she would have been wrong — could go back to her crazy husband."

Conway was shocked by her husband's social media criticisms of Trump

In the early chapters of "Here's the Deal," Conway delved into her first impression of her husband, George Conway. The two were introduced by Republican talking head Ann Coulter, who attempted to set them up several times, with stiff opposition from Conway. She described their courtship, including details about George Conway's political ideology as a conservative-libertarian.

George Conway made headlines throughout the Trump administration for his criticism of the former president and "Trumpism," the shifting political ideology of the Republican Party. He co-founded The Lincoln Project, a political action committee formed by several Republicans in an effort to defeat Trump in his 2020 re-election campaign. The PAC endorsed Joe Biden in April 2020, before primary season was over.

Conway frequently avoided discussing her marriage in interviews throughout her time in the White House. But her memoir shines a light on how her job and her husband's disdain for Trump impacted their marriage and family, noting that he was "cheating by tweeting." She wrote:

"I had already said publicly what I'd said privately to George: that his daily deluge of insults-by-tweet against my boss — or, as he put it sometimes, 'the people in the White House' — violated our marriage vows to 'love, honor, and cherish' each other."

In an interview on "CBS Mornings" with Gayle King and Jeff Klor on Tuesday, Conway revealed that she and her husband no longer wear wedding rings. Though Conway was introduced to Trump by her husband prior to his presidency, Conway wrote that he simply changed his mind about Trump, and is free to do so.

Though not quick to criticize her former boss, Conway wrote that Trump's presidential response to the onset of the COVID-19 pandemic was ill-advised. At one point, Conway wrote, she proposed having all of the living presidents gather at the White House to promote unity and deliver a message to the public.

At the beginning of the Biden administration, all of the former living presidents except Trump participated in a public service campaign to encourage Americans to get vaccinated against COVID-19.

Conway also took issue at Trump's refusal to wear a mask on camera at the beginning of the pandemic. She wrote that other advisors told him that "wearing a mask 'is like (Michael) Dukakis with a helmet in the tank,'" noting that he received a massive positive response during the few times he encouraged mask-wearing.

Early in the pandemic, Trump claimed that disinfectants could help cure COVID-19. Though Trump's approval rating was high at the time, there were concerns that his supporters might attempt some of the false remedies he was suggesting. This hurt what otherwise would have been a chance for him to gain control over the situation, she wrote.

When Conway's memoir was announced in 2021, Simon & Schuster employees responded with harsh criticism for the publishing house, which also approved a deal to publish a White House memoir from former Vice President Mike Pence.

Though the latter received more backlash — including a petition circulated among readers and employees alike — CEO Jonathan Karp said at the time that he believed it was important for the publisher to include different perspectives.