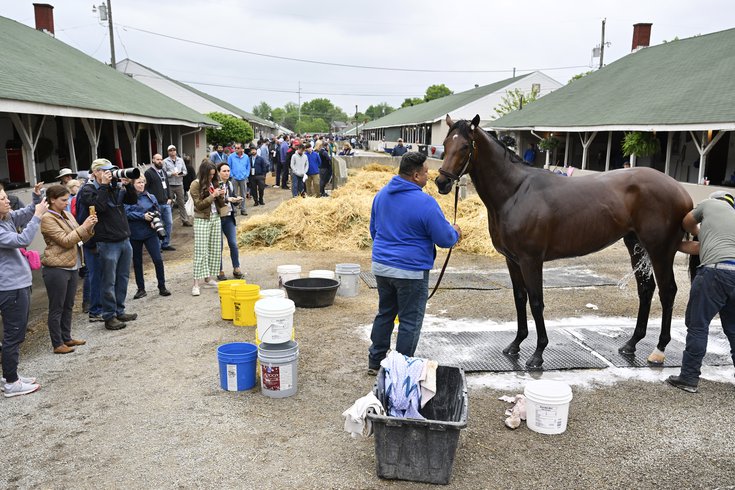 Will Epicenter be the center of attention at the end of Saturday's Kentucky Derby race?

The Run for the Roses returns to open the Triple Crown and one of the most exciting events in sports betting. All eyes on Churchill Downs as the 1 ¼-mile track will host the top-20 horses over the past months, on what could be a muddy dirt track. The process can take time to determine the top horses in this event, and some may drop out due to injury or simply inability to compete with better talent.

There are a couple of key factors to consider when betting something like the Kentucky Derby, specifically the weather and what type of horse normally wins. The latter is influenced by newer rules over the past decade that eliminate “sprints” from qualifying races, therefore putting more emphasis on winning horses getting out early and maintaining leads. The recent history of winners illustrates how vital it is to get out early to either hold or make a final push late in the race.

Then there’s the weather. Rain will make a gigantic difference and should create a seismic shift in how you approach this race from a betting standpoint. If we get rain, as expected, it makes coming from behind an even more difficult task. The track becomes nearly impassable for any horse in the back as it’s hard to race with mud flying in anyone – or anything’s eyes.

Here are the combatants with their odds, as of Thursday morning:

Let’s look at a couple of key horses as either strong plays or stayaways with the weather and type of winner in the backdrop:

The 3-1 favorite has caught the attention of the public and was catching a significant amount of their money. Sure, you will read about how Zandon overcame some early issues to storm back and win the Keeneland’s Blue Grass last week, but that method won’t work this weekend. It will backfire in the rain. As a “dead closer’, Zandon wins races the old-fashioned way, slow and steady. Making late pushes in races normally works on dry tracks, but it will impede both horse and jockey Flavian Prat.

There will be faster horses who can jump out and keep leads in the rain, so avoid even putting Zandon in any show or place tickets. There’s too much risk in betting on a horse that can’t overcome the nasty conditions, especially since it is the odds-on favorite, and you won’t get any break if it comes in 2nd or 3rd.

This is my favorite to bet on and win. Epicenter will work on any finishing ticket and should be used across the board if building any exacta or trifecta tickets. This horse has the ability to get out fast and keep a lead or be in contention to make that extra burst to win a race. Epicenter had – arguably – the best stretch of the winter-spring push to qualify for the Derby, including a dominating performance late in the Louisiana Derby. Not only does Epicenter boast lightning-fast closing speed, but also has uncanny ability to overcome a slow start. We’ve seen it at the Risen Star Stakes with a wire-to-wire victory.

Epicenter won’t get great returns overall to the field, but as the second-best favorite there’s a little more maneuverability on how to bet this horse. Taking him to win is key at 7-2, but don’t discount a place bet, or an exacta with Epicenter winning. Odds won’t suffer if you put Epicenter as the winner in a trifecta ticket, just don’t put Zandon in there!

Tabia at 12-1 begins the longer shot conversation as a horse with whimsical speed. While Epicenter can do it from behind, Tabia might be the fastest horse out of the gate with just two starts under his belt. In his debut, Tabia destroyed the field with a six-length victory, only to follow with a win at the Santa Anita Derby. Not to be forgotten in his second start, but Tabia claimed victory over a field that had Messier; an 8-1 Derby horse.

It's a little surprising that Tabia comes in a little long at 12-1 to win the Derby, despite racing from the 3 position – a spot that hasn’t seen the winner’s circle in 24 years. The rain won’t slow this horse down any more than any other horse in the field, so that isn’t even a deterrent in betting Tabia. This is a fine spot to play any winner, show, or place ticket. You can certainly build an exacta ticket with Epicenter and Tabia coming in 1-2, respectively.

The other long shot would be 20-1 Charge It. Another horse that is simply mispriced because of result rather than circumstance. Charge It is another lightly raced horse that just missed winning the Florida Derby. He had an impressive late charge that nearly secured the victory, losing at the wire. What’s usually left out is that Charge It basically rammed the starting post out of the gate and had to overcome a rarely seen start to the race.

The safe assumption is that Charge It will come out clean and not have any early issues to overcome. He has the speed and toughness in just three races to handle this pack and the weather. It’s also important to look at pedigree, be it trainer, jockey, or race history. Charge It has done just fine in his three races and has the best shot of any of the three horses trained by Todd Pletcher.

Both Charge It and Tabia make great plays for exactas or third place finishes in any trifecta. They are stronger underdogs so the return will be manageable on any show or place ticket for either horse.

The last thing to remember is odds will shift right up until the gate closes. This is a one-time event that catches a ton of public money, so it’s not that difficult for one or two big bets to move the lines. It’s vital to keep shopping for the best return across multiple books, especially in one-off situations like the Kentucky Derby.