"You took our city down. You lessened our chances." 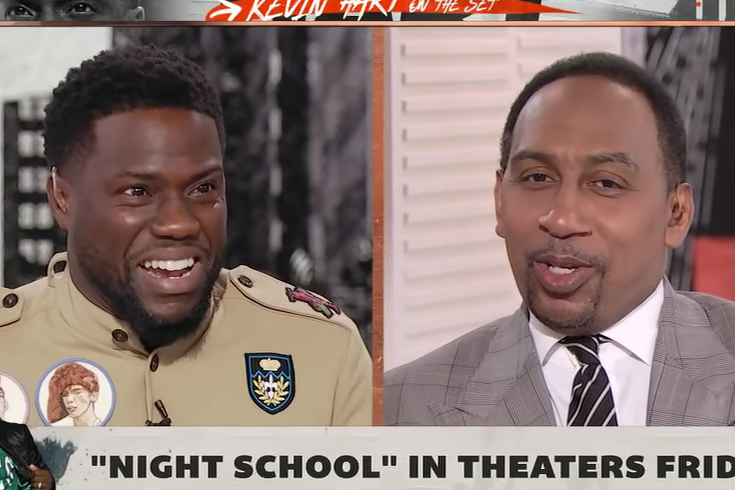 Kevin Hart championed his hometown of Philadelphia to co-host Stephen A. Smith on ESPN’s First Take on Wednesday, Sept. 26, 2016.

Hart was ostensibly promoting his upcoming film "Night School," but he used his segment to attack Smith and defend the city of Philadelphia.

You can watch the absolute chaos here:

Here are a few highlights from their head-to-head spar:

Stephen A. Smith: You suffered for so long, with your city failing to win a championship, and now the Eagles won their first championship in history, so you’re sitting there sticking out your chest, saying it with your chest.

Kevin Hart: When the time comes, that’s when it’s supposed to be there. As a young child, yes, I did suffer. As a guy who was a teenager, who went through high school, yeah, I did suffer. We didn’t have great years.

But as a grown man, who now has a family who watches him embrace sports the way that he does, I get to celebrate and I get to do it with my kids.

KH: I have the opportunity to go to my city and give back. The economy is up. You know why? Because the sports is up. People win, people come to Philadelphia, people want to be there. Now, I get to take my likeness and embrace that, and enhance them coming to Philadelphia.

3. On Smith holding the city's teams back

KH: Some of our worst years were when this man covered sports there. Some of the worst years in Philadelphia were because of you.

SAS: You mean when the 76ers went to the NBA Finals and Allen Iverson took them there, in 2001?

KH: Say what you said again.

KH: Negative! You didn’t say AI had the possibility of coming in here and getting you a championship.

SAS: Because I knew that wasn’t going to happen.

KH: Because you’re negative! … You took our city down. You lessened our chances. We wore black uniforms to try to protect ourselves from you. You. We wore red and white and blue uniforms for the longest. When Stephen A. Smith started to talk basketball, we had to go to black! Why? Because you did that! You’re a cloud.

4. Smith's most hurtful lines as a columnist:

KH: You wrote those things. ‘Eagles don’t have wings.’ You said that.

SAS: I did say that.

KH: "Why don’t they just clip them.” You said those things.

SAS: I did say that. How did you find that? That was a long time ago I said that.

KH: "The City of Brotherly Love should be stepbrothers and sisters, they don’t love each other." You said that.

SAS: I did say that.

KH: You said all those mean things about my city. But now we are flying. (eagle squawk)