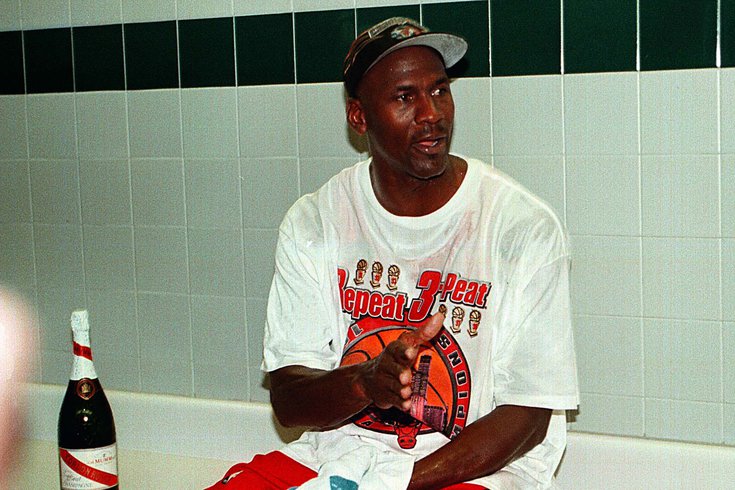 Michael Jordan in the locker room looking exhausted after winning his sixth NBA title on June 14, 1998.

The Last Dance has finally come to a close, and the final two episodes, thanks to the smaller time period they focused on, allowed us to zoom in on some classic moments from the end of Michael Jordan's run with the Chicago Bulls. Here's the bad news — now that this is over, we'll all have to find new things to do on Sunday evenings moving forward.

Here were the things that stood out watching this docuseries come to a close.

Most present-day conversations about Michael Jordan are about his place at (or at least near) the top of the Greatest of All-Time conversation for the NBA. I think a more interesting conversation is if his career is one that can ever be topped by an athlete in any sport because of how it all unfolded.

No athlete has ever had a career closer to a sports movie than Jordan. In his younger days, you see the blinding flashes of talent but he has to take the first steps of the hero's journey, trying and failing but eventually making it through to the other side by overcoming the tactics of his greatest enemy. Then just as he reaches his apex, a moment of personal adversity derails everything, with the loss of his father prompting him to play baseball and walk away at the top of the game.

What happened from there? All he did was come back and play 3.5 more seasons with the team that drafted him, winning two MVP awards and a title in each of the three years in which he played a full season. The final trophy was raised after he dragged an aging team to the finish line with his best teammate in debilitating pain, ending it all with one of the iconic moments in sports history. All of this after a career in which he proved himself to be by far the best playoff performer of his era, and by the numbers the most productive postseason player in the history of his sport.

How exactly do you top that, either as a story or through raw production? Some guys can do the latter, some guys can certainly reflect on their careers and tell a compelling story. But Jordan's was somehow a blend of both, and it it was nothing but upward trajectory until his second retirement. No real valleys, save for a defeat in an abridged season at the hands of Shaq and Penny's Magic, and he came back the next year and spanked them in the playoffs as if to prove a point.

Even the portion of his career not covered in The Last Dance, his late-career comeback with the Washington Wizards, is remembered fondly for giving everyone a farewell tour with one of their heroes, and it helped that he continued to put up numbers in spite of age and health holding him back. And keep in mind that all of this happened as media exploded, giving us more footage and access than was available previously (but not enough to dispel some of the myth-making).

I don't really love doing the GOAT debates because I think players can only be as great as their eras allow them to be. Wilt Chamberlain, for example, gets punished in modern lists because he happened to be dominant during a time where the competition wasn't great as people would like, and it's not as if he controlled who played for the other teams. LeBron James is the best player that I have been able to routinely watch during my lifetime, and I'll look forward to each and every great one that comes down the pipeline in the years to come.

But personally, I just can't imagine someone putting together a career that looks and feels like the one Jordan had, and that was reinforced over the course of these 10 hours. Maybe that was the point.

Lesser-known stories rise to the top

Everyone has seen Michael Jordan leave his shooting hand hang in the air to end the 1998 Finals. Fewer people are familiar with the death of Steve Kerr's father, Gus Lett's relationship with Michael Jordan, and the obstacles Bulls staffers tried to hurdle over in order to avoid Dennis Rodman doing interviews about skipping practice to wrestle during the NBA Finals.

Focusing on that Rodman side plot for a moment, imagining this happening today absolutely breaks my brain. Giants players have been skewered for years for spending their downtime partying on a boat on the weekend. A guy skipping practice to appear alongside Hulk Hogan in a wrestling match is about 50 rungs up the insanity ladder, and I would watch an entire documentary on the 24-48 hours during which that took place.

This was not a docuseries about getting to the bottom of or shining new light on well-worn stories about Michael Jordan. For people who were primarily interested in this series for that reason, that makes it a bit disappointing. But we did get some additional color from the time period, bit players were able to have their stories told, and it was an entertaining journey during a time when sports are on hiatus. We could have done much worse.

(Speaking of lesser-known stories, one thing that stood out to me was the lack of inclusion of Jordan's immediate family, other than some token insults for the Utah Jazz from his daughter and sons. I would imagine they have a lot more to say about living in the shadow of one of the most famous people in the world, but they were never given a chance. Not what some people were in this for, obviously, but that's a story I'd like to hear.)

Of all the things I have been asked to believe during this documentary series, the most insane suggestion was the existence of a pizza assassination plot in Utah during the 1997 Finals. "The Flu Game" is one of the all-time moments in NBA Finals history, but the re-telling of what happened makes the whole thing sound absolutely ridiculous.

To let Jordan and his crew tell it, the flu/food poisoning he suffered that weakened him in Utah was the result of a rogue pizza, delivered by nefarious pizza men who showed up in a group of five at his door. Under suspicion the pizza had been tampered with or even poisoned, Jordan ate the whole thing himself and grew so sick in the middle of the night — 2:30 by their recollection — that team doctors had to be consulted with Chicago ready to play a Finals game the next day.

Okay, so let's take them at their word for a moment. Michael Jordan and his inner circle believed there was an attempt to poison him by a local pizza company the night before an NBA game, and there were no repercussions? No lawsuit? No follow-up investigation? They all just moved on and forgot that someone might have attempted to poison him? And setting aside the serious questions, what kind of toppings were on the pizza, and are they susceptible to spoiling and making someone sick?

I am not going to sit here and speculate about what exactly happened that night in Utah (there are plenty of other people who have done that already), but outside of Jordan clearly being under the weather during the game, everything else is suspect.

I shouldn't be surprised by the lack of curiosity in this documentary, given Jordan's creative input/control, and credit to Jordan's trainer, his best friend, and Jordan for sticking to a uniform story. But this is the best they have 22 years later? Come on, man!

The most egregious exclusion of the entire series

I have been patiently waiting for a moment to come up since night one of The Last Dance, one of the great trash talk events in the history of sports. Karl Malone had a chance to put Game 1 of the 1997 Finals away at the free-throw line in the closing moments, and after he choked, Scottie Pippen was asked what he said to Malone in the moments before he bricked the pair.

Pippen was open and honest: "I said the Mailman doesn't deliver on Sunday."

The Last Dance didn't just cut out the trash talk, they didn't include absolutely any part of this story. Not a mention, not a focus on Malone's missed free throws, just another vengeance story about Malone winning the MVP that year and that fueling Jordan's series win and the game-winning shot in Game 1. Ridiculous!

Somebody give poor Scott Burrell a hug

I hardly even remembered Scott Burrell when The Last Dance began. He played just under 14 minutes per game in the 1997-98 regular season, and since I was a kid at the time the 1998 Finals happened, the bit players don't exactly stick in your memory.

But nobody, and I mean nobody, took more of a beating in this series than Burrell. There were accusations of cheating on girlfriends, constant trash talk during practices, the poor man could not escape Jordan no matter how hard he tried. Even when it seemed like there were moments of safety for Burrell, like Gus Lett's triumphant return from chemotherapy, Jordan managed to sneak in some barbs about Burrell in a private conversation with Ahmad Rashad.

Think about this for a second — there was more open animosity for Burrell in this docuseries than there was for the guys in Utah who members of Jordan's camp want you to believe tried to poison him in the middle of a series. And from all accounts, Burrell is a nice guy, one who seemed comfortable and happy with his other teammates and was at least willing to absorb Jordan's venom so that other people didn't have to.

The national nightmare is over for him after tonight, and I hope he enjoys the peace and quiet with his family.

Parting words for a final shot

Thoughts on the moments before the final shot in Utah in 1998, as described by two Hall of Fame teammates.

Scottie Pippen: "Get the hell out of the way."

As Reggie Miller learned early in his career, don't ever talk trash to Black Jesus.