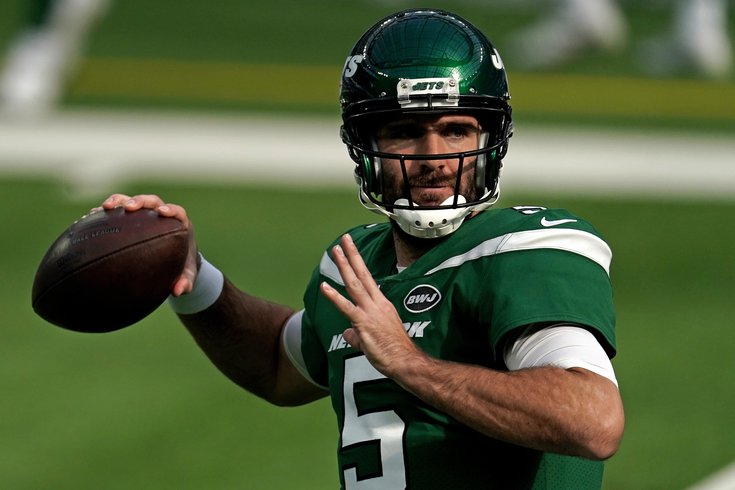 Joe Flacco could be the veteran resource the Eagles need to help develop Jalen Hurts.

UPDATE [2:50 p.m] — It seems as though there is serious interest between Joe Flacco and the Eagles, as the former Super Bowl-winning QB has been at the team's facility all day long.

On Eagles and Joe Flacco: my understanding is he's been meeting with the team since about 9 a.m., getting medical evaluation, talking with coaches, etc. Still there. No offer yet but mutual interest.

An offer could be coming sometime today.

The second week of NFL free agency has arrived and up to this point, the Eagles have been mostly standing on the sidelines while teams around them make moves left and right.

Aside from two safeties, one of which is, admittedly an impact player, Philadelphia has done pretty much nothing to address glaring holes up and down the roster.

One of these holes is at quarterback, where the Eagles have a single player on the roster in Jalen Hurts, who'll enter his sophomore season in 2021. They need a back up — they actually need two — and the Birds did nothing last week as big name back ups found homes like Jacoby Brissett and Ryan Fitzpatrick.

Many are speculating that even with the Eagles' announced allegiance to Hurts as the franchise QB going forward, they might take advantage of the rare opportunity to draft a quarterback with the sixth overall pick.

We'll worry about that one as next month's draft inches closer. For now, though, the Eagles appear to be focused in on a Super Bowl champion to come to Philly and help mentor Hurts in 2021. And one who isn't Nick Foles:

Eagles are bringing in QB Joe Flacco for a visit, per source.

Flacco has strong Philadelphia ties, hailing from South Jersey. Since being QB1 of the Ravens for 11 seasons, Flacco has had two brief stints as a back up over the last two seasons, he actually started 12 times in 2019 and 2020. In those games, the veteran completed 62% of his passes with 12 TD and six interceptions.

He also has experience helping to assist a mobile quarterback make the leap to the NFL, as he eventually lost his job to Lamar Jackson, whom he was helping to tutor in Baltimore.

The former Delaware Blue Hen is 36, older than some of the Eagles new coaches, and could be a valuable resource in the quarterbacks room. We'll monitor his visit to the Eagles facility, as well as any other budding rumors or transactions right here all day. And, you can follow along with the so-called experts just below with our live stream and open thread: