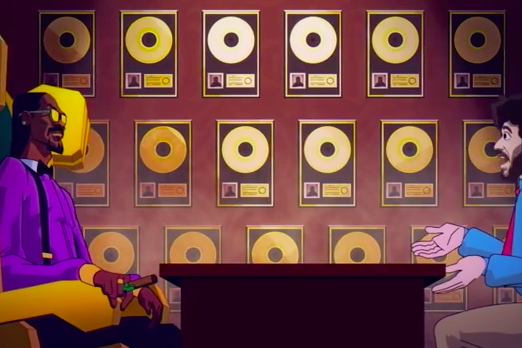 Cheltenham's one and only Lil Dicky, aka David Burd, an affluent Jewish rapper who manages to be a crack-up with pretty good flow and keen observations, has released a brand new video for the eponymous track off his first LP, 'Professional Rapper,' featuring hip-hop legend Snoop Dogg.

The animated video follows the song's dialogue between Burd and Snoop as the former describes his wish to speak beyond the generally ridiculed woes and cosy banality of upper-middle-class life.

Lil Dicky emerged in 2013 as a viral sensation when he released a music video for his song "Ex-Boyfriend," which piled up more than a million views within 24 hours.

According to Billboard, Burd raised more than $113,000 on his Kickstarter to designed to fund "phase two of his rap career."

'Professional Rapper' was officially released today and, if the track above is any indication of its overall quality and humor, we'll probably be hearing a whole lot more from the local product.