After success with its virtual concert in 2020, the one-day event will be held at Eakins Oval on Saturday, June 11 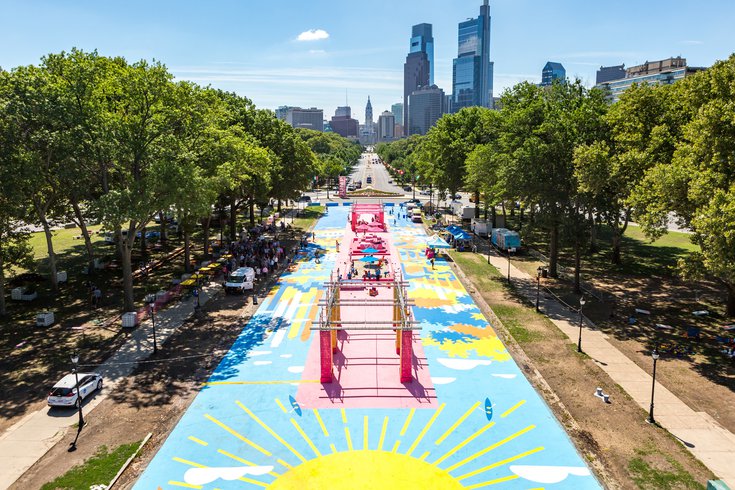 Love From Philly festival, a one-day concert and cultural festival benefitting local artists, will be held at The Oval on the Parkway on Saturday, June 11 from 12 to 10 p.m. Then, on June 16, The Oval+ (pictured above) will be transformed into The Oval XP, an outdoor summer attraction on the Parkway.

There is a lot going on along the Benjamin Franklin Parkway this summer, starting with a one-day concert and cultural celebration supporting artists from across the region.

The Love From Philly Festival is being hosted by 30 Amp Circuit, a nonprofit organization that funds programs supporting the health and wellness of musicians. The event is being held at Eakins Oval on Saturday, June 11, featuring live performances, film screenings and food trucks.

The following week, on June 16, Eakins Oval will be transformed into Oval XP, a summer-long outdoor event filled with food vendors, a beer garden, wellness experiences and entertainment programming across from the Art Museum.

Though the Love From Philly Festival happens just days before the attraction opens to the public, organizers with Philadelphia's Parks and Recreation and Welcome America are including the festival as part of their free summer lineup.

"Why doesn't Philly have an annual cultural gathering like New Orleans, Chicago, New York and LA?" said Andy Blackman Hurwitz, founder of 30 Amp Circuit and the Love From Philly Festival. "We want Love From Philly to be the official start of summer in an evergreen event that celebrates the rich culture of our hometown."

The festival first occurred in May 2020 as a three-day virtual event featuring musicians and benefitting those within the music industry that were adversely impacted by the COVID-19 pandemic. Kurt Vile headlined along with performances from musicians like G. Love, Marc Brownstein of the Disco Biscuits, Dice Raw and Eric Bazilian.

"The Love From Philly event we produced during the pandemic left us with a whole new sense of Philly pride," Hurwitz said. "We had the whole scene from top to bottom, young and old and it was inspiring for a lot of us, it changed a lot of things — for 30 Amp it was the moment we decided to change our entire mission statement from national to local — we have an exciting 10-year plan for the city and it kicks off this June."

This year, rather than host a weekend-long festival just one week after the Roots Picnic, Love From Philly will take over the Parkway from 12 to 10 p.m. The full-day event includes live performances from musicians like Rich Medina, Cosmo Baker, Schoolly D, The Ultimates, The Tisburys and The Philly School District Jazz All-Stars.

A special outdoor screening of Questlove's award-winning documentary, "Summer of Soul (...Or, When the Revolution Could Not Be Televised)" is taking place at 8 p.m. It will be the first live screening of the film since its debut at the Sundance Film Festival in January 2021.

In partnership with the Philadelphia Independent Film Festival, Love From Philly is also screening films from the event, which began on Monday and runs until June 11.

Other attractions at the festival include the Farm to Table Philly Marketplace, featuring artwork and other craft vendors on display throughout the day. Food trucks will be scattered around the festival grounds, including a beer garden serving local-made craft brews.

The festival is free to enter, with no ticket required. 30 Amp is still taking donations to support its ongoing special events lineup.

More information about upcoming programming at Oval XP can be found on its Facebook, as the city prepares to host 10 weeks of urban summer fun at Eakins Oval.