Does South Jersey have a future in the syrup industry? Stockton University is tapping maple trees to find out 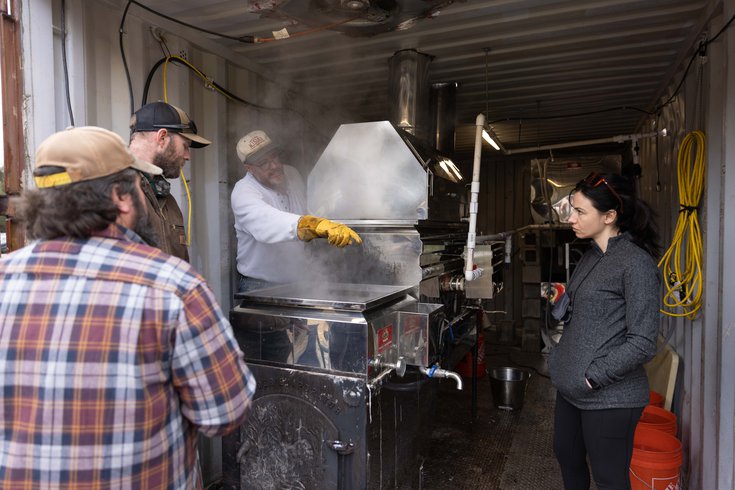 Stockton University is studying the viability of a maple syrup industry in South Jersey. Above, participants in the program boil tree sap into the final product.

Sticky hands are a fact of life for the students, staff and community members participating in Stockton University's maple syrup program.

The university is exploring the viability of a syrup industry in South Jersey thanks to a pair of grants, totaling $1 million, from the U.S. Department of Agriculture.

Since the project began in September 2019, the university and its partners have tapped 400 maple trees on Stockton's 1,600-acre main campus in Galloway Township, said Judy Vogel, a professor of mathematics who has helped coordinate the program.

Stockton also has partnered with dozens of private land-owners across five New Jersey counties who are tapping trees on their own property. Oak Lane Maple, a syrup-focused organization looking to strengthen community ties in North Philly, is participating, too. There are another 400-800 maples being tapped in those locations.

It's not lost on those running the program that New Jersey is not the most ideal location for sugaring, as the maple syrup production process is known.

South Jersey's relatively warm climate means that less sap naturally moves through the area's trees. Additionally, red maples – the most common species of the maple in South Jersey – don't produce as much sap as others, like the sugar maple.

The project is being funded through a pair of three-year, $500,000 grants from the U.S. Department of Agriculture. The grants, which overlap for six months this year, provide funding through early 2025.

"Part of the reason we think this grant is successful … is because of how novel this region would be for sugaring," Vogel said.

As the project expands, Stockton is looking to include more urban settings in South Jersey, like Egg Harbor City, Vogel said.

Many of those areas have an advantage when it comes to sugaring because town settlers planted lots of sugar maples, which are the best maple variety to extract sap, she said.

But the project doesn't end when the tree sap makes it into the buckets.

Stockton students are learning how to process the sap into syrup in an on-campus "sugar shack." It features a wood-powered, cast iron stove from Vermont, the traditional center of the American syrup industry. The stove evaporates excess water from the sap, leaving pure maple syrup.

This year, Stockton has set up seven hubs where they have provided partners with the equipment they need to process maple syrup on their own. The university's smaller partners can bring their sap to these hubs to be cooked down.

Those involved with the project are looking for new revenue sources to keep it going beyond 2025, Vogel said. But even if the study ends, Vogel said the university likely will remain an important resource for people interested in sugaring in South Jersey.

The project already has been successful in laying the groundwork for a maple syrup industry in South Jersey.

While the syrup harvested as part of the project can't be sold yet, per the agreement with the USDA, Stockton spokesperson Diane D'Amico said the embargo will end next year, meaning those involved in the study could start to make money off of their work.

"The goal is to build a self-sustaining network of maple syrup providers who can develop a cottage industry, or even just keep their syrup for themselves," she said. "Think of it sort of like local beekeepers producing honey."