Marvin Harrison Jr., after starting in Rose Bowl, is quickly becoming a star

The Philly product made his first start for the Buckeyes in their bowl game a few weeks ago... 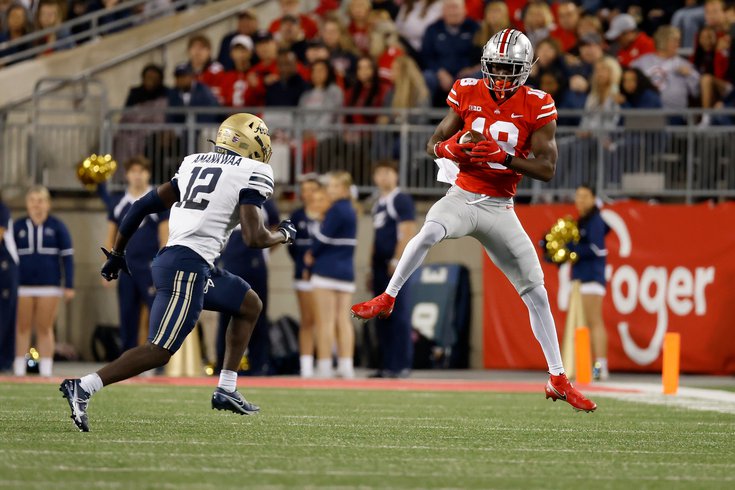 Marvin Harrison Jr. appears to be destined for a staring role as a sophomore next year in Columbus.

He stood there in the baggage check line at Los Angeles International Airport on the afternoon of Sunday, January 2 like everyone else. Marvin Harrison Jr. was waiting there in his grey Ohio State sweatshirt, with a black Ohio State Rose Bowl backpack on, when someone behind him asked, "Excuse me, didn't you just play in the Rose Bowl?"

He asked Harrison to take a selfie with the former St. Joseph's Prep star. Marvin obliged. A few minutes later, in line at Panda Express at LAX, Harrison was once again approached by someone else asking for a selfie, while others passing by were curious as to who he was. Just before he boarded the plane back to Philly, Harrison was stopped yet again, this time with Ohio State teammate Julian Fleming for a picture with the two of them.

It was just the beginning. That was just the second time Marvin Harrison Jr. was in an airport by himself. His days of public travel may be ending quickly.

The rising 6-foot-3-1/2, 205-pound Ohio State freshman receiver is going to be mobbed by far more people in airports — and everywhere he goes — if he continues catching touchdown passes like he did three times in Ohio State's 48-45 Rose Bowl victory over Utah.

Harrison made his first college start in the Rose Bowl after the Buckeyes' potential first-round receivers Garrett Wilson and Chris Olave declared for the 2022 NFL draft on December 27 and opted out of the game.

That placed the onus on Harrison to deliver.

What the nation saw was new to them, though nothing new to anyone who follows Philadelphia high school football. Harrison caught six passes for 71 yards and three TDs, averaging 11.8 yards a catch in his college starting debut.

The true freshman suited up for every game and in four games played, including the Rose Bowl, made 11 catches for 139 yards, averaging 12.6 yards a catch, his longest going for 25 yards — and made a tackle for a safety against Indiana.

That's @MarvHarrisonJr making the tackle for the safety.

No. 5 @OhioStateFB extends its early lead to 23-7. pic.twitter.com/4F4akJnN9Q

"I never had a safety in my life, and I don't think I ever made a tackle in my life before the Indiana game," Harrison said, laughing. "I knew who I was behind with Garrett and Chris. I'm trying to get where they are, and I learned what they did every day. I saw their preparation throughout the week.

"I room with Chris on the road and he's like a big brother to me. We have a big-brother, little-brother program at Ohio State and Chris is my big brother. He was always helpful to me. He's a great teammate. After the Rose Bowl he came up and told me how proud he was of me."

Harrison wore No. 8 at St. Joe's Prep. He says he's staying with No. 18 at Ohio State, after his father, NFL Hall of Famer Marvin Harrison, wore No. 88 throughout his career. Marvin Jr. is a second semester freshman carrying a 3.3 GPA in business finance. His mother, Dawne Avery, was a former track star, and has made it a priority that Marvin Jr. graduate college.

Four days after Harrison played in the Rose Bowl, he was working out with his St. Joe's Prep passing buddy and current Ohio State backup quarterback Kyle McCord at a South Jersey sports facility with their former Prep teammate and current Temple Owl Malik Cooper.

"I still have a lot more to work on," Marvin said. "I can't be satisfied with this. What helped me get ready for the Rose Bowl is after our first practice [Monday, Dec. 27)] C.J. [Stroud, the Buckeyes starting quarterback] pulled me aside and said, 'I've seen you do amazing things since you've been here every day in practice. Go out there and play with confidence, and confidence in yourself.'

"That really helped, especially hearing it from C.J. When C.J. calls you over, you listen. It was great hearing that. I had to have some patience at the start, but the confidence my coaches and teammates have shown helped me."

That was manifested in Buckeyes' coach Ryan Day's choice to go to Harrison during a crucial moment in the second quarter. Down 14-0 to Utah, on fourth-and-one at the Utes' 25, Harrison cradled in a Stroud rainbow for his first collegiate touchdown and Ohio State's first score. Harrison third TD came at another critical moment, tying the score at 38-38 with 10:12 left in the fourth quarter.

CJ Stroud to Marvin Harrison Jr. is gonna be pretty nasty in the red zone next year.

The son of the Colts legend with his 3rd TD in his first career start. pic.twitter.com/AWekjp9WVJ

The only flaw was when Harrison was called for a holding penalty early in the first quarter.

Otherwise, he and record-setting sophomore receiver Jaxon Smith-Njigba, the Rose Bowl offensive MVP with after setting a postseason record with 347 yards receiving, look like the Buckeyes' starting receivers for 2022.

"I can't wait for next season, we open with Notre Dame, and we have Michigan coming to Columbus and that hurt, a gut punch. Every year we have to beat that team up North," Harrison said. "I wasn't expecting all of that to happen in the Rose Bowl. If someone told me what I would do before the game, I wouldn't have believed in them.

"I can't remember the number of text messages I got. I think it was over 300 between texts and social media. I'm super thankful for my Prep family and my Ohio State family. I tried to get back to everyone. But I've been up until around 3, 4 in the morning, thinking of ways to get better, making little notes on my phone on what I need to do to improve."

As an outside receiver with 4.4 speed and bench pressing 335 pounds, Harrison is an imposing force. He went up against Buckeye corners Denzel Burke, Cam Brown, Lejond Cavazos, Jordan Hancock and JK Johnson every day.

"I looked forward to going against them, because they all made me better, but the challenge I looked forward to the most was against Denzel, because we're in the same class and we're going to go at for years to come," Harrison said. "I look forward to it. We have tremendous respect for each other. Denzel says 'Let's work,' and that's what we do."

When the plane touched down in Philadelphia on January 2, Marvin was gathering his belongings when yet another person recognized him and congratulated him on a great game.

Marvin's father was there to pick him up from the airport.

Marvin Jr. put his bags in the trunk. He got settled in the passenger's seat and the first thing his father said to him, after scoring three touchdowns in the Rose Bowl and having random people stop him on both coasts for selfies, was "You have to work on the blocking."