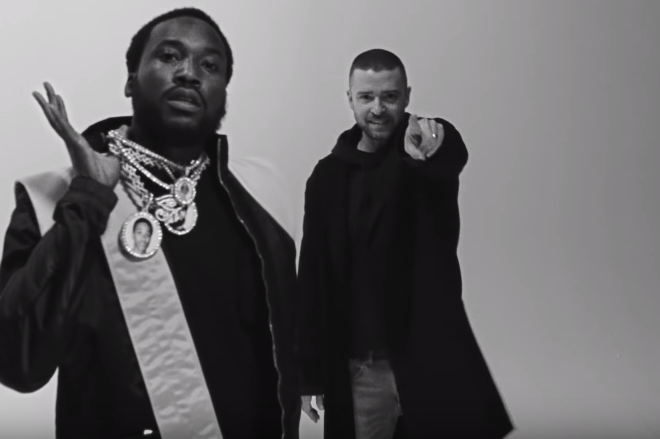 Meek Mill and Justin Timberlake team up on the new single, 'Believe.' The song and video were released late on Thursday. The video, directed by Maxime Quoilin, tells the emotional story of a family split apart after the father is sent to prison.

Meek Mill and Justin Timberlake dropped their collaborative effort, "Believe," late on Thursday. Just hours before the single's release Mill teased the song on social media, noting it was for "motivational purposes only" ... and, well, he wasn't kidding.

The video, directed by Maxime Quoilin, tells the emotional story of a family split apart after the father sent to prison. The daughter comes to grips and slowly puts her life back together with the help of boxing.

"Follow your dreams not your addictions / How we gon' follow our dreams locked in a prison?," Mill raps, touching on his experience of incarceration. "They tried to swallow me whole, God be my witness / Deprive me outta my dreams, but I'm relentless."

Mill holds up his chains, showing charms with pictures of  of Trayvon Martin, and the late rapper Nipsey Hussle. Mill recently paid tribute to the rapper with DJ Khalid, John Legend, Roddy Ricch, among others, at a performance at the 62nd Grammy Awards. Then days after the award show, Mill and Ricch released the track "Letter to Nipsey."

The song approaches its conclusion with Mill and Timberlake trading lines of the notable children's bedtime prayer, "Now I Lay Me Down to Sleep," before the music cuts and a woman reads a Bible verse, Luke 21: 25-28 — also known as "The Return of the Son of Man."