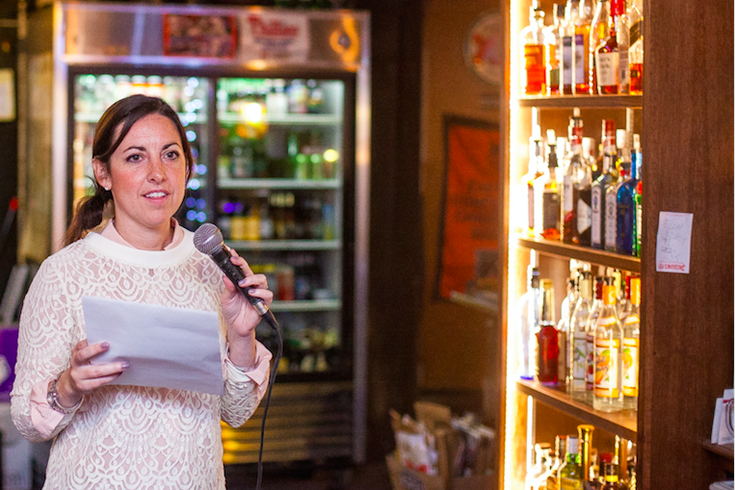 The Republican candidate – who followed Jim Kenney, Milton Street and Doug Oliver, who made appearances at Billy Murphy’s Irish Saloon during the primary (full disclosure: As host, I invited them all) – spoke about a litany of issues discussed at debates in recent weeks.

She also read a round of questions written with her name itself serving as the theme. (See bottom of story for questions and answers, one of which explains why she was named Melissa in the first place.)

Among the topics she was asked about were the future of the School Reform Commission, Kenney’s push for Philadelphia port expansion, attracting new jobs in the city, blight and taxes. She also touched on an issue she stayed away from during the campaign: marijuana decriminalization.

“There have been 98 mayors, and they’ve all been men. There’s been no Republican mayor since the 1950s,” she said at the end of the night, asking people for their votes to help bring about a result that would “make history.”

Hours after Mayor Michael Nutter shared similar sentiments during an education-policy address, Bailey backed the dissolution of the SRC, saying that the mayor should have ultimate accountability for how the school district fares.

Speaking more casually than when on stage at formal debates and forums, Bailey reiterated her push to bring call centers to Philadelphia and boosted energy-hub proposals, saying liquefied natural gas is “part of the future of U.S. energy.”

“We need to stop looking at the past and start thinking about what’s best for the future,” she said.

Taking a direct shot at Kenney, the Democratic candidate most expect to win next Tuesday’s election, Bailey said, “I’m very much against” his proposals involving the port, which has become an oft-referenced talking point in recent weeks. (Kenney sees it as a plan that could provide jobs with family-sustaining wages.)

There’s a simple reason for her objection: “The ships can’t fit under the Delaware Memorial Bridge," Bailey said. "It’s a solution that’s not going to work.”

She took credit for being “the first to say I wouldn’t bring [L&I Commissioner Carlton Williams] back,” an option that Kenney has since embraced, and noted that the city has to “get harder on tax collection” and reform the tax structure so as not to prevent companies from moving operations into the city.

During the Q&A session with the crowd, an attendee asked her opinion on marijuana decriminalization, namely why she hasn’t come out in support of it (a question she’s been asked but hasn’t answered publicly before). From a decriminalization-to-legalization perspective, it came back to parenting.

“We live in a row house and have a 4-year-old daughter. I don’t want her having to smell that,” she explained.

It was that answer that drew the most reaction from those in attendance, who were asked to comment on Bailey’s appearance after she was done on the microphone.

“I wish she liked the smell of marijuana more. Otherwise, she killed it.” – Corner Peeps

“Why doesn’t her row house have walls?” – When I Say Butt, You Say Hole. Butt!

"An old white dude is running for mayor. The other candidate is a Republican. What has the world come to?!” – We’re Just Here For The Beer

And, "Bailey did better than expected. She answered the tough questions and stayed until the end." – F--- the Mets

Now, onto the questions from Melissa Murray Bailey Quizzo Night (answers below in italics):

a.) Buffy the Vampire Slayer

b.) Sabrina the Teenage Witch

2. Name the Eagles' starting running back.

3. Scott Wolf portrayed Bailey Salinger in what 1990s drama about a group of siblings named Charlie, Julia, Claudia and Owen?

6. In The Simpsons' "Whacking Day" episode, Grampa Simpson is featured posing as a female cabaret singer in Nazi Germany, singing a song to Adolf Hitler. Fill in the blank of the title: Won’t you come home, ____________ Bailey?

9. George Bailey is the lead character in what all-time classic holiday film?

10. Dr. Conrad Murray was the personal physician of what singer/performer who died of a prescription drug overdose in 2009?

5-POINT BONUS: The last Republican mayor of Philadelphia’s name is Bernard Samuel. During what war did his time in office end?