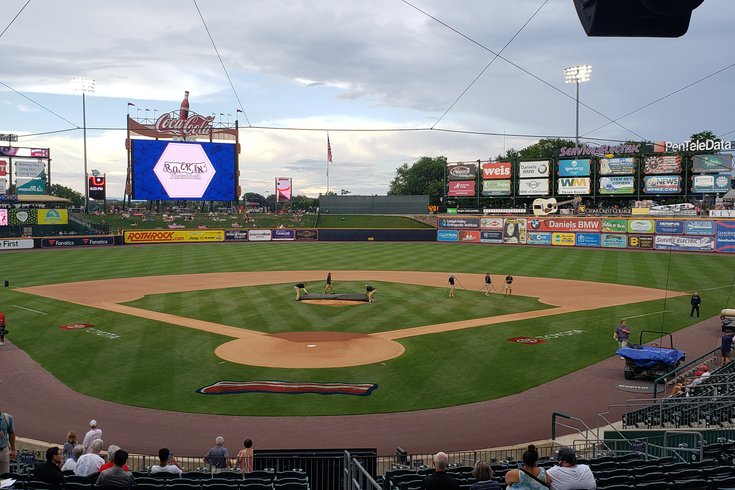 The Lehigh Valley IronPigs' Coca-Cola Park in Allentown prior to a game on Tuesday, August 23, 2022.

The first step was taken late Sunday night when authorization cards were sent out to allow minor league players to sign off on a vote for MLBPA representation.

“Minor Leaguers represent our game’s future and deserve wages and working conditions that befit elite athletes who entertain millions of baseball fans nationwide,” MLBPA Executive Director Tony Clark said in a statement released Monday. “They’re an important part of our fraternity and we want to help them achieve their goals both on and off the field.”

The Major League Baseball Players Association has launched a campaign to unionize Minor League Players across the country #1u #FairBall pic.twitter.com/DDq4Q8NOXI

Per ESPN, at least 30 percent of players need to sign authorization cards to trigger the vote for union representation. If the vote rules in favor, the National Labor Relations Board will require Major League Baseball to recognize the new minor league union, then it and the MLBPA will collectively bargain from there.

This process marks the start of a seismic shift in the baseball landscape, and though there is still plenty of legwork to be done, it's one that's been a long time coming and could affect more than 5,000 players.

“This organizing campaign is an investment in the future of our game and our Player fraternity,” Clark said.

Last month, MLB paid out $185 million to minor leaguers to settle a class-action lawsuit for minimum-wage pay and overtime violations, which also allowed for minor league players to be paid through spring training. The suit was filed by three retired minor leaguers, primarily former Marlin Aaron Senne, in February 2014.

In 2020, with the baseball season ravaged by the COVID-19 pandemic and the minor leagues facing a reduction of affiliated teams coming out of it, Advocates for Minor Leaguers was formed by a handful of former players to champion for better pay and working conditions.

Then, last November, MLB announced a policy to provide minor leaguers with housing effective for the current 2022 season.

“This generation of Minor League Players has demonstrated an unprecedented ability to address workplace issues with a collective voice,” Harry Marino, outgoing Executive Director of Advocates for Minor Leaguers, said Monday. “Joining with the most powerful union in professional sports assures that this voice is heard where it matters most – at the bargaining table.”

The new housing policy, meanwhile, hasn't gone over well with the club's minor leaguers, as the organization failed to secure apartments and instead put their prospects in hotel rooms for the year, according to a report from The Philadelphia Inquirer's Scott Lauber.

“This is typical Phillies [crap],” said an anonymous minor leaguer in the report. “Even the [Oakland] Athletics are giving their players apartments, and that’s one of the cheapest owners in baseball. If you’re going to be a $2 billion company, at least treat your employees better.”

It's unclear how quickly the process will move from authorization to a vote and then bargaining.

But the key, for now, is that the process has been started.