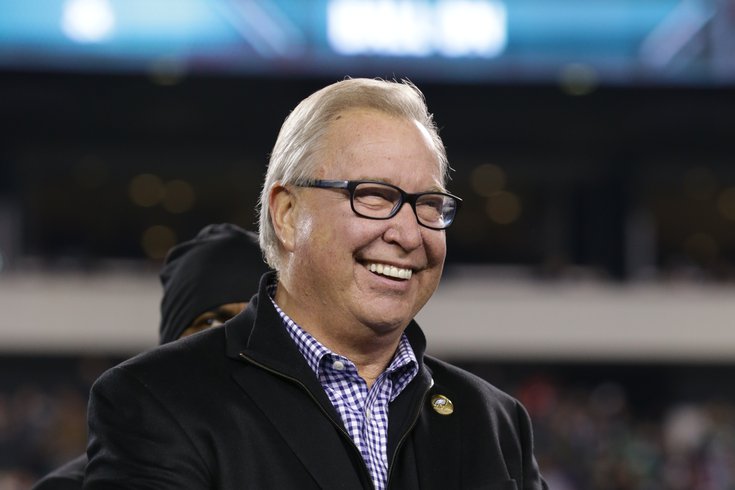 Former Philadelphia Eagles quarterback Ron Jaworski is expected to join NBC Sports Philadelphia as a host on 'Eagles Postgame Live' for the upcoming NFL season. Jaworski has worked as a broadcaster locally and nationally since is NFL career ended in 1989.

With the Eagles season opener less than three weeks away, NBC Sports Philadelphia is finalizing terms with former quarterback Ron Jaworski to join the "Eagles Postgame Live" crew, according to sources with knowledge of the situation.

The pending addition of Jaworski, who followed his NFL career with a successful broadcasting career locally and nationally, comes after the retirement of Ray Didinger, a longtime Eagles postgame host, and the departure of Seth Joyner, who left the show in June to join another postgame broadcast.

NBC Sports Philadelphia declined to comment on hiring Jaworski, who was traveling this week and could not immediately be reached for comment.

"Eagles Postgame Live" traditionally has a panel of four hosts. With Jaworski on board, one of those seats remains vacant. An NBC Sports Philadelphia spokesperson said longtime columnist Reuben Frank will appear on the broadcast after the week one game against the Detroit Lions on Sept. 11, and may also be part of the panel in subsequent weeks.

Jaworski, 71, played 10 seasons as the Eagles quarterback from 1977-1986, leading the team to Super Bowl XV at the end of the 1980 NFL season, which is all around the time he earned the nickname "Jaws" from former 76ers guard Doug Collins. Philadelphia lost that Super Bowl, 27-10, to the Oakland Raiders. Jaworski is a member of the Eagles Hall of Fame and the Philadelphia Sports Hall of Fame.

Jaworski's NFL career ended in 1989, following seasons with the Miami Dolphins and the Kansas City Chiefs. He relocated back to South Jersey and quickly got involved with football broadcasting, including stints as a commentator for SportsRadio 94WIP (which at the time broadcast on 610 AM), and working with NFL Films founder Steve Sabol on the show "NFL Matchup," working out of NFL Films's Mount Laurel headquarters.

Later, he joined ESPN and was an analyst on the "Monday Night Football" broadcasts from 2007-2011, before becoming a full-time NFL analyst on a variety of ESPN shows.

In 2017, Jaworski was let go from ESPN as part of a wave of layoffs that saw the network part with high-profile anchors and reporters, including Ed Werder and Trent Dilfer. ESPN executives reportedly had hoped to retain Jaworski, but parent company Disney made the final decision. In recent years, Jaworski has been heard on select "Monday Night Football" broadcasts on radio for Westwood One.

At ESPN, Jaworski was known for his film-driven style of game analysis, an approach that has typically been secondary to the panel discussion format that has made "Eagles Postgame Live" a sustained success with audiences over the years.

Outside the NFL, Jaworski was a co-owner and team president of the Philadelphia Soul, the former Arena Football League team that won three championships before the AFL shut down in 2019. He's the CEO of New Jersey-based Ron Jaworski Golf Management Inc., which operates seven golf courses in the region, and leads the Jaws Youth PlayBook foundation to support at-risk youth in the Delaware Valley.

NBC Sports Philadelphia could face increasing competition for Eagles postgame viewers this season. JAKIB Media recently hired former 97.5 The Fanatic afternoon host Mike Missanelli to join Seth Joyner, Devan Kaney and Derrick Gunn for their new postgame show that will stream on YouTube and 6ABC.com. Gunn, who previously conducted postgame interviews on "Eagles Postgame Live," was let go by NBC Sports Philadelphia in 2020 and tweeted in July that the network had recently reached out to him about a possible reunion that failed to materialize.

Without Didinger, one of the most decorated and beloved Eagles broadcasters in the business, "Eagles Postgame Live" will undoubtedly have a different feel when the games start in September. But in Jaworski, NBC Sports Philadelphia gets a knowledgeable and studious anchor whose deep ties to the Eagles and the region are unquestioned.