Who won the week in Philly sports: Bryce Harper wows in Allentown and South Philly 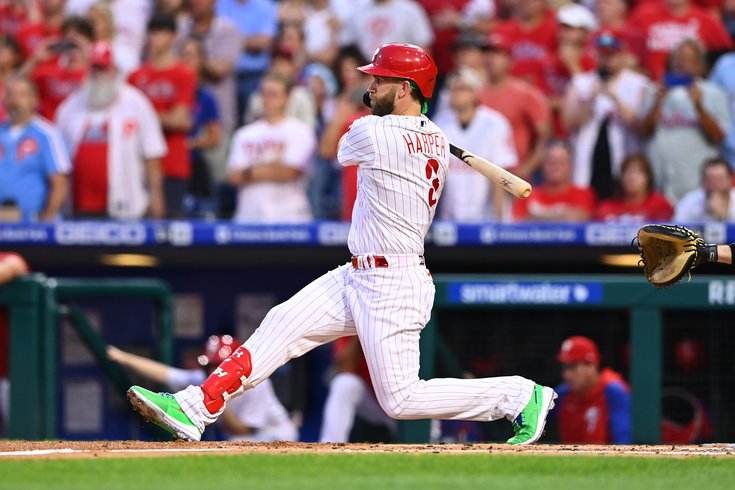 With the calendar shortly flipping to September, it feels out of the ordinary for the Phillies to be a major factor in the Philly sports news cycle. It was once a norm, a formality as the Fightins prepare for yet another October run. In a city where the Eagles are everything and just 13 days from Week 1, it was Bryce Harper who stole the show in Philadelphia this past week.

The Phillies, against all odds and everything fans have learned about them over the last decade, hung tough while the reigning National League MVP has missed the last two months of the season. With Rob Thomson overseeing things, a string of hot streaks from Alec Bohm, Rhys Hoskins and J.T. Realmuto and bullpen play that wasn't historically awful, the Phils put themselves in playoff positioning. Now, Harper's back and the expectation, not just the hope, is a Red October.

Who won the week in Philly sports? Which person have you talked about more than any other over the last week? Who made you stop what you're doing to watch over the weekend? The answer is easily Harper.

Phillies fans flocked to Allentown last week to see Harper do a minor league rehab stint with the Lehigh Valley IronPigs, the big league team's Triple-A affiliate. In his first at-bat in a professional baseball game since June 25, Harper did what everyone across the tristate area dreamed he would: he absolutely crushed one over the fence:

How did he follow up that blast later in the game? A little oppo-boppo action, hitting a homer of the left field fence:

That pitcher will tell his grandchildren that he allowed a home run to Bryce Harper.

What did Harper do the next night to follow it up? He hit a casual two-run, walk-off double for an IronPigs win:

Harper was expected to play from Tuesday through Saturday to prepare himself for an MLB return on Monday. It only took him two days of raking to stop the Lehigh Valley trip short and head back to the majors. In 10 plate appearances in those two games, Harper hit .625 with an OPS of 2.325 six RBI. LOL.

I went to Citizens Bank Park on Friday night to watch Harper's first game back in red pinstripes. He didn't disappoint. Here's what I wrote about it in my recap of the Phils-Pirates series on Sunday:

I went to Friday night's series-opener against the Mets as a spectator, eager to see Harper in person for his first game in two months. The energy when he stepped to the plate in the first inning with the bases loaded was electric. Everyone at Citizens Bank Park was on their feet, the crowd ready to burst with a single swing of Harper's bat. Harper didn't hit a grand slam like those people imagined he would, but he ripped a two-run single to give the Phils a lead they would never relinquish:

In his first series since fracturing his left hand in San Diego on June 25, Harper went 3-for-9 with two walks and two RBI. More likely than not, Harper will make his postseason debut in red pinstripes in October. If the Phils can survive the Wild Card round and have a home game in the NLDS, I'm banking on that CBP crowd going into a complete frenzy during Harper's first at-bat.

With Harper in the lineup, the Fightins took two of three from the Pirates and improved their record to 72-56, 2.5 games up on the Padres for the second Wild Card spot in the NL. Life is good for Phillies fans right now.