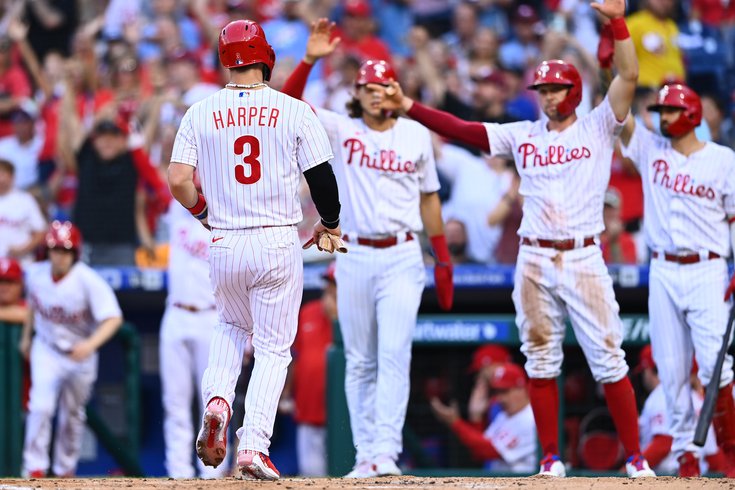 Bryce Harper celebrates scoring a run with his Phillies teammates.

A forgettable Sunday loss aside, it's been about as good of a week as possible for the Phillies. The Fightins had a four-game sweep over the Reds, saw the reigning National League MVP return to their lineup and took two of three from a lowly Pirates squad.

The Phils are gelling at the right time, Bryce Harper is back in the fold, they've won seven of their last nine games and look primed to punch their ticket to the postseason for the first time in 11 years.

With the team two games up on the Padres for the second Wild Card spot in the NL at the moment, here are some notes on the Phillies of late...

I went to Friday night's series-opener against the Mets as a spectator, eager to see Harper in person for his first game in two months. The energy when he stepped to the plate in the first inning with the bases loaded was electric. Everyone at Citizens Bank Park was on their feet, the crowd ready to burst with a single swing of Harper's bat. Harper didn't hit a grand slam like those people imagined he would, but he ripped a two-run single to give the Phils a lead they would never relinquish:

In his first series since fracturing his left hand in San Diego on June 25, Harper went 3-for-9 with two walks and two RBI. More likely than not, Harper will make his postseason debut in red pinstripes in October. If the Phils can survive the Wild Card round and have a home game in the NLDS, I'm banking on that CBP crowd going into a complete frenzy during Harper's first at-bat.

J.T. Realmuto is no longer the Best Catcher In Baseball, but his current hot streak is closer to what the Phillies imagined they'd be getting when the gave him a contract worth $115 million last winter. His OPS has risen to .801, an unfathomable development after he looked completely lost at the plate to start the season. Realmuto had an OPS of .677 from Opening Day through the end of June while hitting .239. That can be okay for a regular catcher who provides some defensive chops, but not for a guy of Realmuto's contract and pedigree.

Now Realmuto is on a tear just as everyone on this team seems to be. With Realmuto raking like this, the Phillies' lineup is as potent as fans dreamed it would be back in the offseason.

It's foolish to think that a team can just sweep every series and should win every game, but a sweep truly felt realistic on Sunday given how the Phils have been playing. The team's lineup gave him exactly zero help, but Noah Syndergaard had a rough go of it, surrendering five runs in fewer than six innings of work against a Pittsburgh club that's 30th in baseball in runs scored.

Syndergaard has postseason experience to his name, winning a game in the 2015 World Series with a seven-inning, three-run effort. I'm not sure the Phillies could be comfortable with him making a playoff start, however, given the pitcher he is at the present.

If the current playoff standings hold true, the Phils would head to Atlanta for a three-game, best-of-two Wild Card series. The three starting pitchers would be Zack Wheeler, Aaron Nola and Ranger Suarez at this rate.

It's been said constantly this weekend, but how good is your lineup if you have Jean Segura hitting eighth some days? Segura has been the Phillies' most consistent non-Harper player over the last three seasons and has a rabid fan base behind him: Jean's Jeans.

I did not know that "Jean's Jeans" are a thing. my quality of life has increased exponentially. pic.twitter.com/J8scaa8Tz0

I grew up in the era where the Duck Pond, the Wolf Pack and the Padilla Flotilla populated the top of Veterans Stadium. I missed these type of groups. CBP needs more of them!

Prepare for your sleep schedule to go to hell this week. The Phils have a three-game series out in Arizona against the Diamondbacks before a Labor Day Weekend trip to San Francisco. Friday's matchup with the Giants is at 10:15 p.m. on Apple TV+, so the type of people who complain about the Phils being on streaming might already be in bed by that point.