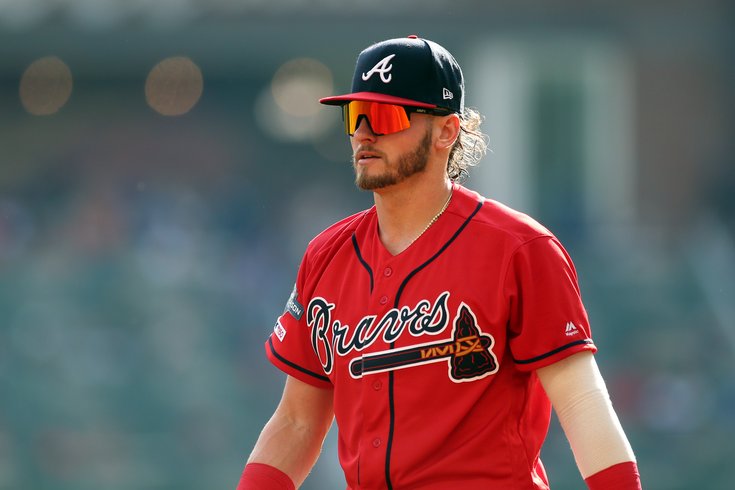 Josh Donaldson is the top remaining prize in free agency.

For whatever reason, teams in the NL East as currently constructed seem to be missing one key element: clear starters at third base.

The Braves, who are currently vying to hang on to free agent Josh Donaldson (more on him in a bit), would rely on journeyman Johan Camargo if the season started today.

The Nationals, who will be without one of their best players from 2019, Anthony Rendon, look to have 35-year-old Howie Kendrick but he's played just 33 of his total 1,549 games at the position — utility men Jake Noll and Adrian Sanchez are on the roster with 3B experience.

The Mets may hand the hot corner to one of their corner outfielders in JD Davis, as Todd Frazier too is a free agent and unlikely to return.

And the Phillies, who let Maikel Franco leave are currently expected to rely on utility man Scott Kingery to play every day for the first time.

(We also should mention Brian Anderson, the Marlins serviceable, everyday third baseman — but obviously Miami is not among the contenders in the NL East.)

Which team is in the best shape? Even our own hall-of-fame baseball writer Paul Hagen has no idea:

Too early to tell. Will Josh Donaldson go back to Atlanta or sign with the Nationals? Will the Cubs trade Kris Bryant and, if they do, will he end up in the NL East? We don’t even know for sure if the Phillies will go with Scott Kingery here.

There is not a whole lot of third base experience currently rostered in the division:

For a division stacked and expected to once again be among the best in baseball, the options at third are pretty unimpressive.

Which is why the sweepstakes for Donaldson, the best remaining free agent, could be the deciding factor — as none of the four NL East contenders currently sport an All-Star caliber third baseman:

Feels like Donaldson to Braves or Nats, then the one that misses out trades for Kris Bryant. Not great!pic.twitter.com/zioi35g9zx

If the Braves or Nats wind up with Donaldson, it could be bad news for the Phillies (though a four-year monster deal for a 34-year-old may have some longterm downside for the team committing nine-figures to him).

As mentioned in the video in the tweet above, trades for star third baseman Kris Bryant and Nolan Arenado — two players in whom the Phillies reportedly have interest — are complicated and unlikely at least for the moment. Which means one of the NL East teams will get a prized player at a key offensive position while the other three contenders will have replacement-level situations this year.

Sources: Nolan Arenado has roughly a 50/50 chance of being traded, with a half-dozen teams having checked in, as I just reported on @MLBNetwork. The #Dodgers are *not* the most likely destination, as #Rockies prefer not to trade Arenado in the division. @MLB

The Phillies, of course, have Alec Bohm as their top prospect and a potential heir apparent to play everyday at third base, a reason why they may be content to enter the season without a star at the spot. But the other three teams are all at least two or three seasons away from having a top draftee projected to be big-league ready at the spot.

The meat of free agency is behind us, but there will still be some kind of splash as the NL East figures out what third base will look like. You can be sure that no team wants to be left behind in the NL East as the second year of the division's arms race continues.

Don't be surprised if trade talks (or at least rumors) continue heat up after Donaldson finds a new home sometime this winter.