MLB trade rumors: Phillies have some desirable pieces they could dangle as sellers 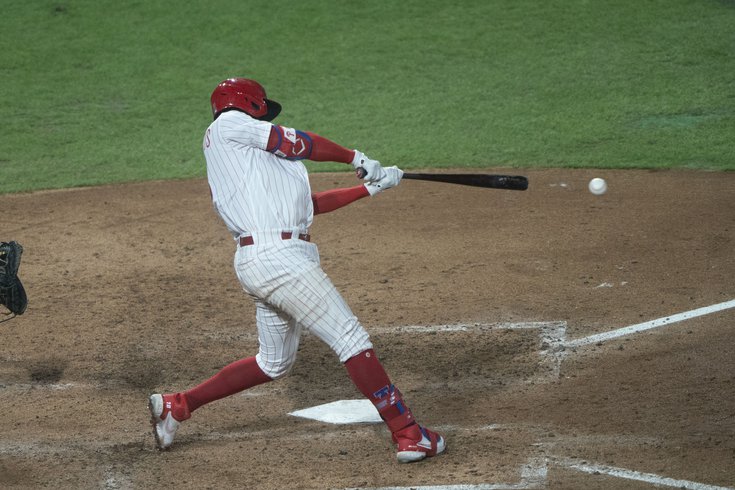 Didi Gregorius seems to be fully healthy after an injury-plagued 2019.

There is a reasonable chance the Phillies work out their bullpen issues.

Perhaps they clean up their mistakes in the field, Rhys Hoskins gets his groove back and Scott Kingery bounces back fully from his bout with COVID-19 last month.

The Phillies could get hot over their next 17 games, 13 of which are against teams in the NL East, and they could position themselves as buyers at the August 31 MLB trade deadline.

But that's a best-case scenario. Sitting at 5-8 and having squandered lead after lead in excruciating fashion (against teams like the Orioles and Marlins), the Phillies do not look like a team bound for the playoffs during this shortened 60-game season. In fact, from their season-opening NL East odds of +325, Draft Kings, via TheLines.com, now has them at +400. They have also dropped from +2200 to win the World Series to +2900. All of this means that the Phillies' front office and Matt Klentak have to at least think about what their contingency plans are should they find themselves under .500 at the deadline.

Regardless of this season's result, the Phils need to and will find a way (everyone hopes) to keep the game's best catcher J.T. Realmuto. For the sake of this article, let's assume that the Phillies will at least get that right.

Bryce Harper is here to stay, and they have the top part of their starting rotation set (Aaron Nola and Zach Wheeler have been good so far). But their farm system is far from stellar, and there are players (like Alec Bohm) who need an avenue to make the majors.

The Phillies could realistically be sellers in two weeks, and they could wave goodbye to a handful of players to get the shot in the arm they need to regroup for 2021 and beyond. Here's a look at who could be on the block if things don't turn around fast:

The Phillies signed Gregorius to a one-year prove-it deal and he's done his best to prove it so far. He's on a 162-game pace right now to hit 37 homers and drive in 137 runs. He's also played in every game so far this year. There are plenty of contending teams that would be interested parting with some minor league talent for his services during September.

It really all comes down to what the Phils' future plans are at shortstop. If they intend to retain the 30-year-old Gregorius, they'll obviously hang onto him. But if they don't think he'll accept an extension to stay, or if they are looking to make him the cog that opens the floodgates for Bohm (by moving Segura back to short, putting Kingery at second and letting the Phils top prospect play third) it makes sense to shop him and sell high on (likely) their best available offensive asset.

We talked about a 162-game pace with Gregorius above, but obviously that kind of projecting is usually inaccurate, especially with this small of a sample size. Bruce is, for example, on a 25-triple pace this season. That would be interesting to say the least.

Still, Bruce has as much power as he's ever had and he is set to come off the books for the Phillies this October. He was acquired in a mid-season deal last year, and could be dealt away in one too. His value to both AL and NL teams is as high as it ever will be with the universal DH in play, and the Phils could pounce on a team desperate for some left-handed power heading into the postseason.

Technically, the Phillies have control over Arrieta for three more seasons, but they'll be able to buy out his contract to make him a free agent this coming offseason and that's what most expect the team to do. If they're looking to let him walk anyway why not see what they can get for the former Cy Young award winner?

Arrieta has had two solid starts so far with a 2.45 ERA in 11 innings. At 34, he's not nearly the pitcher he used to be, but his experience and leadership could at least convince a contending team to part with a mid-level prospect. Opening another slot in the starting rotation would also let the Phillies (who, if they sell will not be contending themselves) see what they have in some of their younger arms before 2021.

It seems pretty clear, at least to those who watch intently, that Velasquez just isn't going to turn into the kind of reliable backend of the rotation starter many hoped he would pan out to be. With one year of arbitration ahead before he becomes a free agent in 2022, this might be the perfect time to sell his extra year of team control as part of a deal to land some new talent to help the rotation. He's still 28, and a change of scenery might be the jolt he needs to reach his potential — who knows?

Yes, selling from the bullpen, one of the three most reliable arms there right now seems absurd. But if the Phils aren't in the mix for one of 16 available expanded playoff spots in two weeks, Alvarez may be one of their best trade chips. He's 31 and has tossed 3.1 scoreless innings this season and had a very solid 3.36 ERA in 67 games with Philly last season. With so many teams likely to be pushing for a playoff spot, there will be tons of interest in bullpen help and the Phillies may be able to get the best value out of Alvarez — or perhaps also Tommy Hunter or Blake Parker (both set to see their contracts expire this offseason).