The decision comes one week after the regulatory agency gave Pfizer's coronavirus shot the green light. 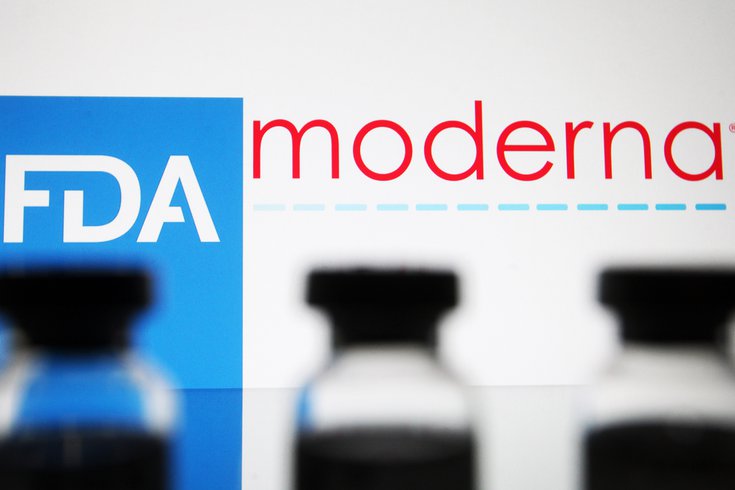 An FDA advisory committee voted to recommend Moderna's COVID-19 vaccine receive an emergency use authorization for people ages 18 and older. The regulatory agency authorized it one day later.

America now has two vaccines in its fight against the coronavirus.

The U.S. Food and Drug Administration authorized Moderna's COVID-19 vaccine Friday, an expected move that will greatly increase the number of Americans who can be inoculated against the coronavirus.

The vaccine has been granted an emergency use authorization for people ages 18 years old and older.

"In making this determination, the FDA can assure the public and medical community that it has conducted a thorough evaluation of the available safety, effectiveness and manufacturing quality information," the FDA said.

The decision comes one week after the FDA authorized the Pfizer-BioNTech vaccine, kickstarting a massive vaccination campaign. The first doses of that vaccine were administered in health care workers earlier this week.

The CDC has recommended that health care workers and nursing home residents and staffers receive COVID-19 vaccines before anyone else, though states have the authority to distribute their vaccine allotments however they see fit. Those groups make up about 24 million people.

An FDA review released Tuesday found Moderna's vaccine to be highly effective and have a "favorable safety profile" during clinical trials involving more than 30,000 participants. Two days later, the agency's Vaccines and Related Biological Products Advisory Committee voted, 20-0 with one abstention, to recommend the vaccine.

The most common side effects include fatigue, headaches and muscle pain. No side effects were deemed serious, though the minor side effects have been more prevalent after the second dose.

"The side effect profiles of these two vaccines that are now deployed are reasonably similar," said Dr. Peter Marks, director of the FDA Center for Biologics Evaluation and Research. "Local discomfort is pretty common after the second dose of these vaccines. There are some other systemic side effects which are generally mild and go away after a day.

"I think ultimately if these are managed well, if we communicate the expectations well, particularly among those who are eager to get back to a normal life ... there will be reasonable uptake of this. And we'll continue to communicate about these side effects to help people be prepared to know what to expect."

The FDA is requiring both Moderna and Pfizer to conduct active followup for safety, including monitoring for any adverse events. The FDA is recommending that anyone with a known history of severe allergic reaction to vaccines not get either COVID-19 vaccine.

There have been about five cases of people having severe allergic reactions to Pfizer's vaccine, including three cases in Alaska, FDA officials said. The agency has instructed those administering the vaccine to have emergency response teams on hand to treat anyone who has a severe reaction.

"We'll be looking at all of the data we can from each of these reactions to sort out exactly what happened and we'll also be looking to try to understand which component of the vaccine might be helping to produce them," Marks said. "I think at this point we have, at this point, the right mitigation strategy with the availability of treatment for a severe allergic reaction being at the ready. And we'll continue to monitor very closely."

The FDA confirmed Moderna's vaccine is 94.1% effective – a comparable efficacy rating to Pfizer's. Of the 196 clinical trial participants that contracted COVID-19, only 11 received the vaccine. The rest received a placebo.

Both vaccines have been found to be effective across age, gender and racial and ethnic demographics, though Moderna's was less effective among people older than 65 during clinical trials.

But it also has some advantages.

Moderna's vaccine proved effective at preventing severe COVID-19 cases during clinical trials. None of the vaccinated participants developed severe illnesses. The data on Pfizer's vaccine was too small to make any strong conclusions about its ability to prevent severe illnesses.

Moderna's vaccine also can be stored at regular refrigerator temperatures, unlike Pfizer's, which requires storage at -94 degrees Fahrenheit.

There was not enough data to make any conclusions about the vaccine's effects on pregnant women. Expectant mothers were excluded from the trial, though 13 women were unknowingly pregnant when they were enrolled, including six who received the vaccine.

The FDA recommends monitoring people who get either vaccine for Bell's palsy, a condition that causes sudden weakness in the facial muscles. Four people in Moderna's trial, including three who got the vaccine, developed the condition, though there is not enough data to determine whether it was a causal relationship.

The coronavirus has infected more than 17.2 million Americans, killing more than 310,000, including more than 6,800 people in the Philadelphia region.

Health experts stress that the vaccination rollout will take many months and that mitigation strategies, including social distancing and mask use, will remain critical for the foreseeable future.

The FDA grants emergency use authorizations when there are not any adequate, approved and available alternatives. They allow treatments and vaccines to be made available during the emergency without FDA approval, a licensing process, if they demonstrate a favorable benefit-risk assessment.