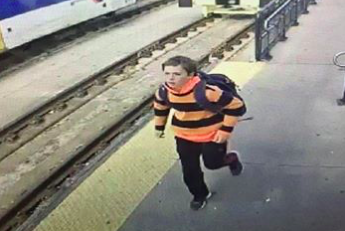 Thomas Kolding was spotted at various train stations after he went missing from Mountain Lakes, New Jersey, on Oct. 30, 2018.

A 15-year-old New Jersey boy who left his family the night before Halloween has been found safe in Philadelphia, according to authorities.

Thomas Kolding went missing from his family's Mountain Lakes home on Oct. 30, carrying only about $1,000 in cash and some personal belongings. The teen reportedly had an argument with his father about his grades, according to NorthJersey.com.

Authorities in Morris County launched an extensive search for Kolding as word of his disappearance spread on social media.

Police confirmed Kolding was located Tuesday afternoon near the Penrose Plaza Shopping Center in Southwest  Philadelphia. Authorities shot down initial reports that Kolding was in a "tent city."

#BREAKING 15-year-old Thomas Kolding of North Jersey has been found safe in Philly. Missing since Oct. 30, Police say he initially traveled by train from Denville to Newark-Broad Street Station to New York Penn Station then to Philly. @CBSPhilly https://t.co/EkaRs4ckQB

Prosecutors also thanked the police in Miami Township, Ohio for their assistance in the investigation, along with several other law enforcement agencies.