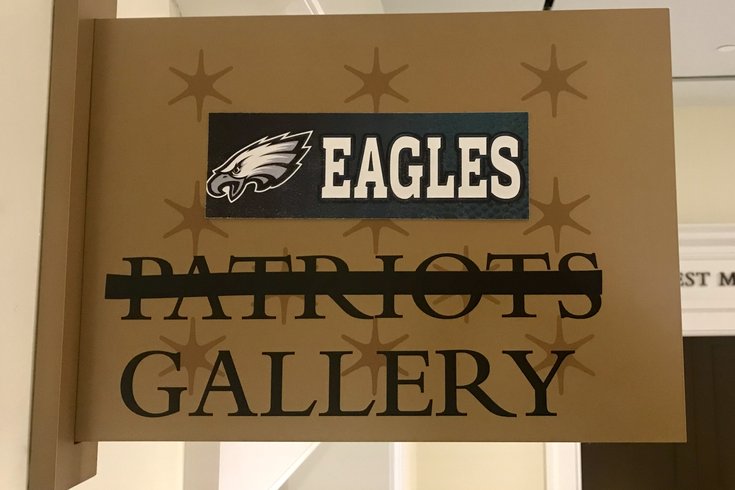 Courtesy of the Museum of the American Revolution/for PhillyVoice

It's the Eagles Gallery, at least for now.

Next? One of Old City’s most buzzed about tourist attractions is renaming an entire part of its building.

The Museum of the American Revolution, which opened last April with dozens of Revolutionary War impersonators and a keynote address from Former Vice President Joe Biden, will be referring to its Patriots Gallery instead as the “Eagles Gallery” from now until the Super Bowl on Sunday, Feb. 4.

Though the change pays homage to the museum’s hometown team, Eagles and Pats fans alike are invited to wear apparel from the team of their choice for $2 off the price of admission and a discount on some gift shop items (though you'll have better luck staying stylish in Eagles gear thanks to these shops).

The Museum of the American Revolution is also touting its eagle-related exhibit features, including OG President George Washington’s own Diamond Eagle pendant currently on display. The item hasn’t been back to Philly since Washington first received it more than 200 years ago.

There’s no shortage of Boston-related history to see there, either, in case you or someone you know needs a safe space in the countdown to Super Bowl LII. Numerous Revolutionary War artifacts found in Boston, including a pair of baby shoes made from a British Red Coat, populate the museum, as well as a recreation of Boston's Liberty Tree.