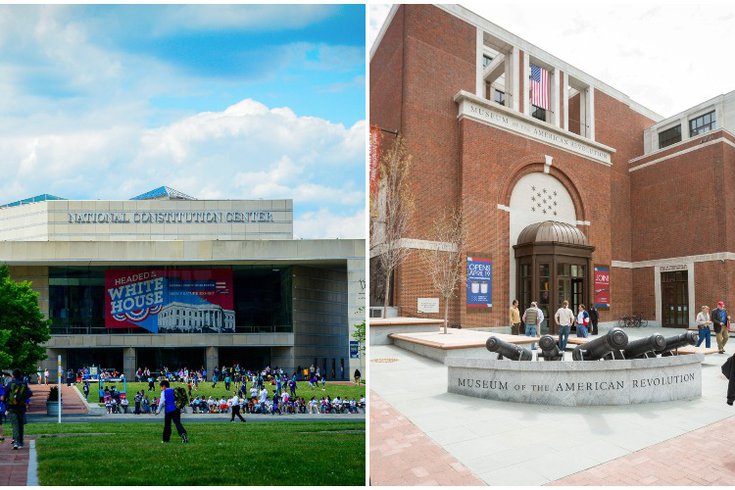 Visitors to the National Constitution Center and Museum of the American Revolution can now enjoy both institutions with the purchase of one ticket.

Families and visitors to Philadelphia this year can once again enjoy two of the city's historic museums with the purchase of one ticket.

The National Constitution Center and the Museum of the American Revolution have brought back a joint ticket program, which allows guests to check out both institutions at a discounted price.

The collaboration between both museums, located just a half-mile away from each other in Old City, was originally started in 2017 before the program was paused at the onset of the COVID-19 pandemic.

The joint tickets are available for purchase through both institutions online or in-person. Guests who purchase tickets online must select an entry date and time. The tickets are valid for access to all exhibits at both museums.

Adult joint tickets are available for $29 and children's tickets cost $19. Family packages for two adults and two children are $90.

Get the whole story of the journey from “We hold these truths” to “We the People!” Together, the Museum and @ConstitutionCtr offer visitors to a joint ticket that includes admission to both #HistoricPhilly museums for a discounted price.

Visitors to the National Constitution Center can now visit the new 50-ton marble tablet engraved with the words of the First Amendment to the U.S. Constitution. The tablet went through a year-long installation process that was recently completed.

The stone engraving spans the 100-foot-wide wall on the building's Grand Hall Overlook, the second-floor atrium which overlooks Independence Mall.

Made from Tennessee pink marble, the giant tablet was previously engraved, fabricated and erected in 2007 at the Newseum in Washington, D.C. It was situated on the museum's four-story-high, 74-foot-tall façade that ran along Pennsylvania Avenue, just blocks away from Capitol Hill and the White House.

After the Newseum closed in 2019 due to financial issues, the Freedom Forum donated the tablet to the National Constitution Center.

Guests at the Museum of the American Revolution can take in the works of historical artist Don Troiani through the special exhibition, "Liberty: Don Troiani's Paintings of the Revolutionary War." The exhibit is on display in the museum's first-floor Patriots Gallery through Sept. 5.

"Liberty" is the first major public exhibition of Troiani's original artwork. The exhibit features more than 40 of his original Revolutionary War paintings and pairs each with artifacts from his personal collection.

The paintings depict stories about the pivotal people and events in America's fight for independence against Great Britain.

Notable moments from the American Revolution that are featured in his paintings include the 1775 Battle of Bunker Hill, George Washington’s 1776 attack on Trenton, the 1777 Battles of Saratoga and Oriskany and the Franco-American victory at Yorktown in 1781.