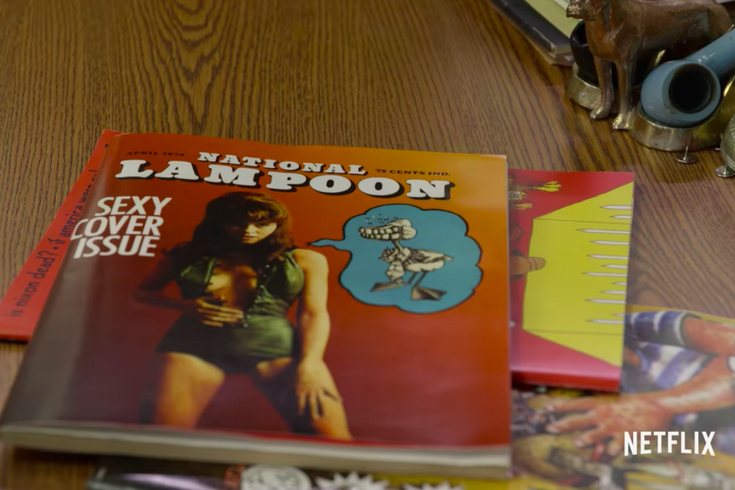 In the 1970s and '80s, "National Lampoon"'s success and influence created a new media empire overseen in part by the brilliant and troubled Doug Kenney.

Some Netflix productions are heralded with the kind of hair-on-fire publicity that would accompany the news that Donald Trump was actually 67 percent cream cheese (can you say “My next Guest Needs No Introduction?” Others, apparently, are “dropped” on Mondays at 4:13 a.m. with CIA-like silence.

Falling under the latter category is “A Futile and Stupid Gesture,” a two-month-old biopic about the late Doug Kenney, the 1970s and ‘80s comedy king to whom Lorne Michaels, Judd Apatow, Howard Stern and other contemporary overlords of humor owe their fame and fortune.

MORE FROM CHUCK DARROW: TNT’s ‘The Alienist’ has come just in the ‘Knick’ of time | Here are the ways to help an ailing Oscarcast get healthy | Anthony Jeselnik sticks a thumb in the eye of the PC crowd

It was Kenney who, with fellow Harvard Lampoon alum Henry Beard, co-founded National Lampoon in the early 1970s, thus forever changing the comedy landscape by bringing to the mainstream the kind of gross, purposely offensive and sexually explicit humor that led directly to the “Saturday Night Live” empire and, indirectly, to the low-brow, frat-boy programming churned out by Stern, Apatow, etc.

But Kenney’s importance stems from much more than just his culture-altering humor magazine. The success of National Lampoon in print form led to both the syndicated “National Lampoon Radio Hour” and “Lemmings,” a live comedy revue. Both featured the talents of young performers and writers who would go on to be members of the first “SNL” cast and crew, including Chevy Chase, John Belushi and Gilda Radner.

And when personal problems and the out-of-control success of NatLamp proved too much for Kenney, he simply moved to Hollywood and spearheaded the creation of the groundbreaking screen comedy “Animal House” (“Caddy Shack” was another of his celluloid children).

I came across “A Futile and Stupid Gesture” by accident while recently searching for programming that would keep me pacified during a recent flight to Seattle. I’m certainly glad I did, partly because I was an avid National Lampoon devotee during its first-half-of-the-‘70s heyday, and it continues to inform so much of my personal comedy aesthetic (e.g. my current standup fave, Anthony Jeselnik is a spiritual descendant of Lampoon/“SNL” Prince-of-Darkness Michael O’Donoghue). Another reason is that the film gives Kenney his due as a show-business game-changer.

Playing the Ohio-bred WASP who conquered the ethnic-dominated world of New York and Hollywood show business is the ubiquitous Will Forte. Having never met or talked to Kenney, I can’t vouch for the veracity of his portrayal. But he certainly succeeds as the film’s emotional center (a sometimes-difficult trick considering Kenney—who died at age 33 in 1980 under mysterious circumstances while hiking in Hawaii--is generally rendered as pretty much a self-absorbed, drug-sucking, emotionally screwed-up jerk).

A cast of solid, if not particularly high-profile character actors (Martin Mull as the senior-citizen Kenney/on-screen narrator and Emmy Rossum as a Kenney girlfriend are arguably the best-known of the bunch) colors in the surrounding spaces in a uniformly fine manner; Thomas Lennon’s take on O’Donoghue, who died in 1994, is downright eerie.

Because of the turmoil and drama in Kenney’s life, there are a lot of dry, somewhat melodramatic passages. But they are more than compensated for by recreations of actual printed, spoken and filmed bits that aren’t just hilarious, but irrefutable evidence of the brilliance of Kenney and those who assisted him as he dragged comedy kicking and screaming (and sometimes puking) to where it is today.