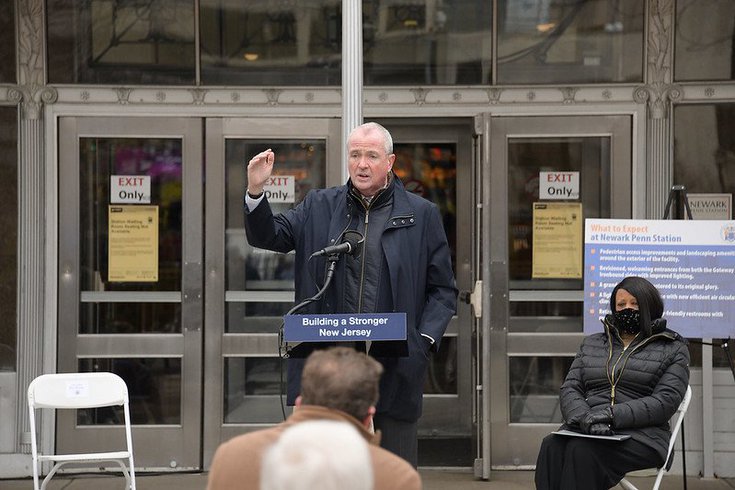 They include three sites in South Jersey – The Moorestown Mall in Burlington County, Rowan College in Gloucester County and the Atlantic City Convention Center in Atlantic County.

The other sites will be located at the New Jersey Convention and Exposition Center in Middlesex County, the Rockaway Townsquare Mall in Morrris County and the Meadowlands Complex in Bergen County.

The sites, expected to open in mid-January, initially will be accessible to health care workers, but eventually will expand to include other groups.

"Getting us to the 70% level of vaccination will take time. It will take, in fact, months," Murphy said. "It will take a concerted effort of those of us up here, and many, many more around the state. The vaccine's near presence in our state is not enough to move the needle. We will need to embrace it."

The state is prioritizing health care workers and long-term care facility staffers and residents. State officials expect that effort to continue through January and February.

The general public likely will have the opportunity to get vaccinated in April or May.

As of Friday, 2,149 of the state's 650,000 health care workers have been vaccinated. So far, they only include those who work in hospitals.

Persichilli stressed it will take considerable time for vaccination levels to reach those necessary for herd immunity against the coronavirus.

"New Jersey will roll out COVID vaccines in phases to serve all those who live, work and study in the state," she said. "Our goal is to vaccinate 70% of the eligible adult population within six months. This is a huge undertaking, as it could represent as many as 4.7 million individuals."

However, New Jersey won't be able to inoculate as many people in December as initially anticipated due to a reduction in the number of vaccines they are projected to receive.

State officials expected its second shipment of the Pfizer vaccine to include 86,775 doses. But the latest federal data shows New Jersey only will receive 53,625 doses next week, Persichilli said.

State officials said the information they receive about vaccine shipments is continuously changing. Other states also are seeing reductions, but Murphy said New Jersey has not received a "satisfactory reason" for the allocation change.

New Jersey previously expected to receive a combination of 492,075 doses of Pfizer's and Moderna's vaccines in December. But that total has been reduced to 392,800.

Most of that drop-off is the result of New Jersey receiving fewer doses of Pfizer's vaccine. The state initially expected to receive 273,375 doses in December, but only will get 183,300. Moderna's vaccine is expected to be authorized shortly.

New daily COVID-19 cases have slightly decreased over the last several days, Murphy said, though he cautioned that New Jersey is still feeling the effects of the national surge.

"These are still big numbers and they prove without any doubt how far we are still away from being out of this tunnel," Murphy said.

There also were more COVID-19 patients discharged – 461 – than those admitted – 397 – to hospitals Thursday. Hospitalizations are slightly down the past two days.

There were 3,582 patients being treated for COVID-19 related-causes as of Thursday night. Roughly 200 of them were waiting to be tested for the coronavirus. There were 715 people in intensive care units and 480 patients on ventilators.