The vice president is the highest ranking U.S. official to get inoculated against the coronavirus 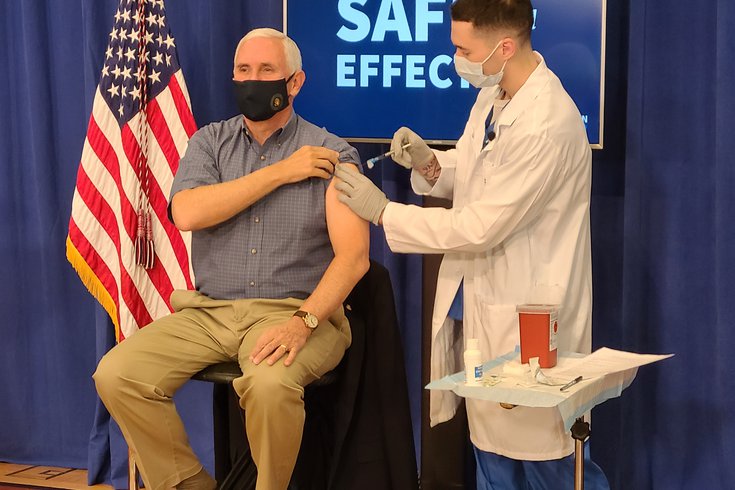 Vice President Mike Pence says he got a COVID-19 shot on live television to demonstrate the vaccine's safety.

Vice President Mike Pence received the Pfizer-BioNTech COVID-19 vaccine on live television Friday morning — making him the highest-ranking U.S. official to roll up his sleeve to promote public confidence in its safety.

"I didn't feel a thing. Well done," Pence said after receiving his shot in the Eisenhower Executive Office Building in Washington beneath a sign that read "SAFE and EFFECTIVE."

Pence said he hopes his vote of confidence goes a long way – public confidence has improved since clinical trial data indicated the Pfizer and Moderna vaccines are safe and highly effective. But some people remain hesitant. False rumors and myths about the COVID-19 vaccine have circulated through the internet and caused anxiety about getting the shot.

The U.S. Food and Drug Administration authorized the Pfizer-BioNTech vaccine for emergency use last week, kickstarting a massive vaccination rollout. The FDA also has said it will authorize Moderna's vaccine.

"Karen and I wanted to step forward and take this vaccine to assure the American people that while we cut red tape, we cut no corners," Pence said. "Thanks to the great work at the National Institutes of Health, and the great and careful work of the FDA and the leadership of our president and Operation Warp Speed, the American people can be confident we have one, and perhaps within hours, two safe and effective coronavirus vaccines for you and your family."

Vice President @Mike_Pence: "Karen and I wanted to step forward and take this vaccine to assure the American people that while we cut red tape, we cut no corners." pic.twitter.com/EPb58JdOYa

Pence's vaccination was trending on Twitter Friday morning, having generated more than 100,000 tweets.

It is not yet known when Trump will receive the vaccine. Trump, who contracted and recovered from the coronavirus in October, said he looks forward to getting the vaccine "at the appropriate time," according to NBC.

Biden is slated to get the vaccine next week.

"I don't want to get ahead of the line, but I want to make sure we demonstrate to the American people that it is safe to take," Biden said.

Former Presidents Bill Clinton, George W. Bush and Barack Obama also have committed to allowing cameras to film them receiving the vaccine, a joint effort aimed at building public confidence in the shot.

Vaccines are being rolled out at a critical time, though it will take many months to bring the pandemic under control.

COVID-19 cases and deaths are regularly topping record highs as the second surge rages on. More than 310,000 people have died from the virus nationwide, and it has infected more than 17.2 million people. In Pennsylvania, there have been nearly 530,000 infections and more than 13,000 deaths.

Vaccinations began in Pennsylvania earlier this week. The state received 97,500 doses to distribute everywhere but Philadelphia. The city is getting its vaccines directly from the federal government. It received 13,650 in its first tranche.