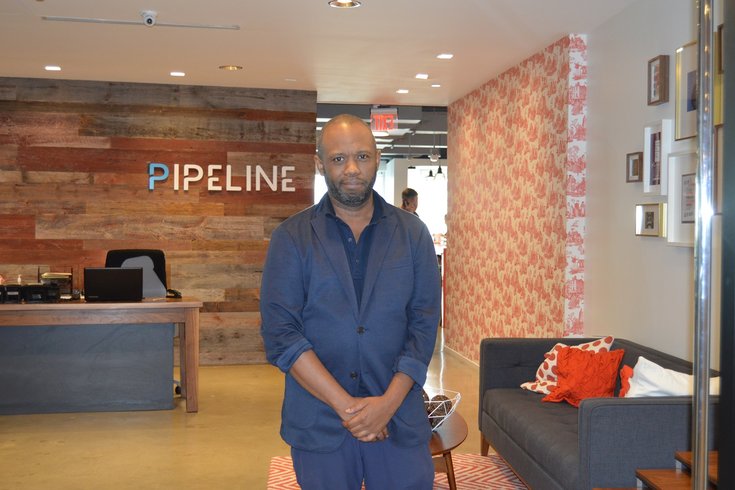 Tayyib Smith got a Knight grant to help found the Institute of Hip Hop Entrepreneurship.

“Philadelphia used to be known as a New Jerusalem for African-Americans. In the mid- to late-18th Century, the city was home to more free Blacks than any other place in the Western World,” says Tayyib Smith. “Now, we have about one-third of the city living in poverty and about 80 percent of those people are poor African-Americans. Now, I can’t fix that, but I can do something.”

It was with that spirit of service that Smith and Meegan Denenberg — both of Northern Liberties’ Little Giant Creative — founded the Institute of Hip Hop Entrepreneurship. A recent recipient of The Knight Foundation’s Cities Change grant, the IHHE will function as a professional development program and business incubator with a strong social impetus. The idea is to enroll young entrepreneurs from underserved communities in an intensive nine-month program designed to arm them with the tools to succeed, starting this November.

We sat down with Smith — whom you may also know from his role as editor of Philly’s music/lifestyle magazine, “ two.one.five” — to discuss the creative economy, hip-hop’s hustler spirit and his plans for the institute’s future.

How did the Institute of Hip Hop Entrepreneurship come about?

So I’ve been working in creative spaces for some time now, maybe since the late ’90s. I came to it because I was passionate about music, whether it be acid jazz, drum ’n’ bass, house, hip-hop. I was one of those people who was usually turned onto something early and trying to influence my friends and tell them why it was cool. I have one story that I tell people a lot, I was in New York at the Giant Steps party and I saw King Britt and he recognized me because I used to go to his parties and he said to me “You can really do this, don’t be one of the dudes just backstage. Figure out what you want to do and make it a job.” … That was one of the galvanizing moments that made me look at things differently.

A lot of your earliest experiences were D.I.Y. and music related. Did that help you start to think entrepreneurially?

Absolutely, absolutely! So, way before “two.one.five” or any of that stuff, I used to work for this company called Axis Music Group and there were three partners: Vikter Duplaix, James Poyser and my mentor Chauncey Childs. That group had broken off from Jazzy Jeff’s production company A Touch of Jazz, and there were all these different [musical] ecosystems that broke off from that. …

I worked on the Vivian Green project. I helped produce events for the Soulquarians [an early 2000s super-group that included The Roots, D’Angelo, Erykah Badu and late hip-hop genius J. Dilla]. At that time I was getting hands-on experience working with people who were building international brands at a very special time in music history, particularly for Black music in Philadelphia.

You’d be surprised how many people I talk to who reference that particular time in Philadelphia’s musical history.

Yeah, it’s an untold story, and even if you think about all the musicians who came here to get the vibe and to be produced. My office was at [famed Philly-based arranger and producer] Larry Gold’s studios and for 12 years that was the headquarters of “two.one.five” magazine and Little Giant. I met Timbaland there, Justin Timberlake, Usher, etc. There was a lot of energy here and people were coming here to soak up the soul. Those experiences taught me about the importance of having a community of people who are at the top of their game to work with. I get frustrated in the nonprofit/philanthropic space because people, whether they are aware of it or not, they have this relationship with communities in need that comes from a missionary perspective.

“I always joke and say that if there [was] a Hip-Hop Museum or Hall of Fame you’d have to include Bob Moses and Richard Nixon,” says Tayyib Smith.

And you see hip-hop in particular as having intrinsic characteristics that feed self-reliance and the entrepreneurial spirit?

Yeah, I can’t think of anything that has influenced more people to be fiscally literate — become your own boss and make something out of nothing — than hip-hop. If you look at the narrative behind indie rock it’s, basically, ‘we’re stuck in the suburbs with no culture and you don’t wanna end up working in a cubicle like your brother.’ Hip Hop is like ‘I don’t have sh--. There ain’t sh-- around me. I’m gonna make a change and the only way to do that is to take control of my own destiny.’ I always joke and say that if there were a Hip-Hop Museum or Hall of Fame you’d have to include Bob Moses and Richard Nixon [laughs] because they created the inhumane conditions that people were living under in New York City, The Bronx and all of the redlined cities throughout the country in the ’70s. Music programs were cut and what did they do? They went home and reconfigured the technology that was available, their parent’s record players then they took that innovation out into the streets.

Switching gears a bit, I’m curious about what the IHHE program is going to look like for enrollees. How will the program be structured?

Right now the application is available at IHHE.org. It went up June 1, and it closes September 1. Applicants have to be between the ages of 18 and 32. It’s a 9-month program with one intensive weekend a month and independent study throughout the remainder of the month. Our focus is on people who wouldn’t normally have the opportunity to be a part of an incubator or a traditional entrepreneurship program. People who might be in school, already have their own small business or have kids or whatever and don’t really have much time for experiential learning.

What are your hopes and goals for the program?

The Knight Foundation grant is a catalyst grant. It’s basically about doing something that the city or a large non-profit wouldn’t try. Hopefully, we can do this and create some success stories for others to emulate.