Report: Eagles miss out on CB Byron Jones, who will sign with Dolphins 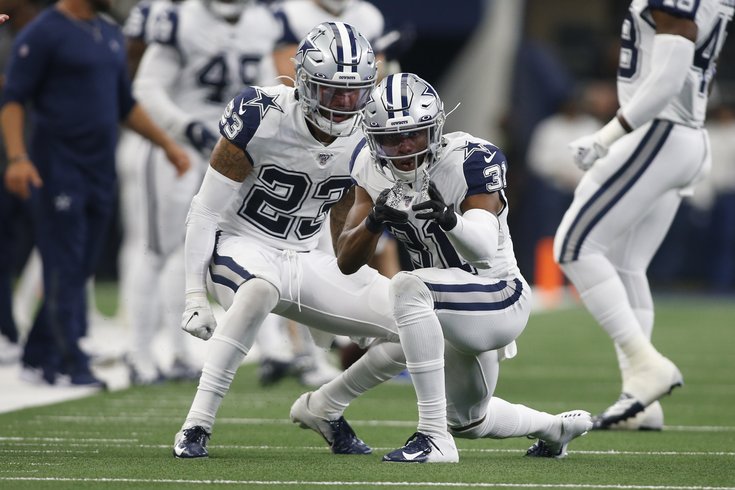 UPDATE [7:20 p.m.] — Welp. It looks like the Eagles will be looking elsewhere for a starting cornerback. Despite numerous reports throughout the offseason linking Philly with former Cowboys cornerback Byron Jones, the 29-year-old free agent will be signing with the Miami Dolphins, according to Ian Rapoport.

Source: The #Dolphins are getting #Cowboys FA CB Byron Jones. A massive deal for the now highest-paid corner.

It's likely the price that scared the Eagles away, as Jones will now reportedly make more than his new Dolphins teammate, Xavien Howard, who previously had the highest total contract ($75.25 million), the highest average salary ($15.05 million) and the second-highest guarantee ($46 million).

Here's the reported terms of Jones' deal, and it's a doozy.

Byron Jones’ new contract with the Dolphins will be a five-year, $82.5 million deal, including $57 million guaranteed, per source. It includes $40 million in first two years.

However, it had been reported for some time now that the cost to acquire Jones was likely to make him the richest cornerback in the league, so maybe it was more than just the price. Or, perhaps the Eagles weren't as "all-in" as we were led to believe.

I don’t think the Eagles HAD to get Jones, but if the money was $17m per year, that’s right at what was predicted. Makes me wonder how “in” they really were.

Earlier on Monday, Adam Schefter reported that the teams who missed out on Jones would likely view the Lions' Darius Slay as a backup plan.

And one of the teams that doesn’t land Byron Jones then could wind up trading for Lions’ CB Darius Slay. https://t.co/XEghB8qgHD

Our own Jimmy Kempski previously took a look at whether the Eagles should try to trade for Slay, and he didn't come away convinced that it was a wise move for Philly. Either way, it looks like Slay might be on his way out of Detroit, as he tweeted this immediately after the news of Jones' contract broke.

Consider what the Eagles were able to accomplish last year on the first day of the NFL's legal tampering period, Monday's activity — or lack thereof — might have been surprising for some Philly fans, especially considering the Birds were expected to be busy in free agency this year.

Of course, as the nation comes to grips with a spreading pandemic that's changing the way most of us live on a daily basis, the world is a much different place than it was just a few short days ago. And while the Eagles may have been relatively quiet on the first unofficial day of NFL free agency — they re-signed Hassan Ridgeway and decided not to tender Corey Clement — most of the big-name players they've been rumored to have interest in still remain available.

That includes the one guy who has been most linked to the Eagles this offseason: Cowboys cornerback Byron Jones.

We've covered Jones extensively in the run up to free agency, and on Monday, a few more reports came out suggesting the Eagles were still very much in on the 27-year-old corner. The first came from Josina Anderson and named four teams, including the Eagles who appeared to be going hard after Jones:

I'm told the #Dolphins, #Jets, #Raiders, #Eagles are among the clubs that have discussed interest in impending free agent CB Byron Jones, per source.

Later in the afternoon, however, Tony Pauline of ProFootballNetwork.com reported that the Raiders were going hard after Jones, and it the final decision would come down to Las Vegas (yes, that's the Raiders) and Philly:

[T]he Raiders are pushing hard for cornerback Byron Jones. Right now, it looks to be between the Raiders and the Eagles. The price tag is expected to be somewhere around $18 million/annually.  [ProFootballNetwork.com]

Interestingly enough, Joe Banner told Paul Domowitch of the Philadelphia Daily News over the weekend that the price tag for Jones would be somewhere between $18-19 million, so this all tracks.

Now, I don’t think Jones is in that elite group that is going to break the bank. But I do think he’s just below that. I don’t think it’s going to be long before we see the top cornerbacks getting $20 million-$21 million. So, it wouldn’t shock me if he is able to command $18 million or $19 million.

It depends on how much emphasis he wants to put on going to a winning team vs. going to the highest bidder. My sense is that will be a factor for him. Maybe that gets the deal closer to $17 million or $18 million. If he’s playing everybody off against each other to get a maximum deal, it could be $18 million or $19 million [per year].  [inquirer.com]

Will the Eagles be able to outbid the Raiders and land their coveted corner? Stay tuned to our live updates post for the latest...