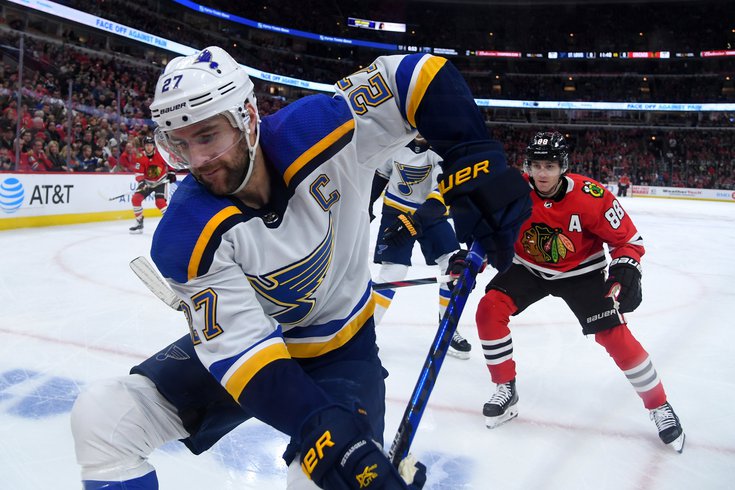 Free agent defenseman Alex Pietrangelo could be what the Flyers need, but his cost might be prohibitive.

The first day of NHL free agency, which opened at noon on Friday, was a quiet one for the Flyers as general manager Chuck Fletcher decided to sit back and watch the market unfold before sitting back some more and watching several players the team was rumored to be interested in fly off the board on Day 1.

If the team is looking for a replacement for recently retired defenseman Matt Niskanen, they missed out on both Kevin Shattenkirk and T.J. Brodie, a pair of veteran blue-liners who could have helped fill then void left by Niskanen's departure. They also watched Torey Krug sign a massive seven-year deal with the Blues, which all but guarantees than Alex Pietrangelo will be signing elsewhere.

Could that be in Philly? In our What They're Saying on Friday, we took a look at the 30-year-old defenseman, but as Sam Carchidi pointed out, his price tag may be too high for the Orange and Black.

But Pietrangelo, who had a $6.5 million cap hit last season, may be too costly for the Flyers. With commitments to 18 players expected to be on the team, they have about $8.7 million in cap space and still must sign restricted free agents Patrick and Myers, who were given qualifying offers.  [inquirer.com]

That being said, its doesn't sound like a decision from Pietrangelo is coming on Saturday, as he will reportedly take the day to evaluate his options before signing anywhere.

Alex Pietrangelo will spend the day evaluating his options and is not expected to make his decision today.

It's also worth noting that it didn't sound like the Flyers were planning on being big spenders heading into free agency — which isn't necessarily a bad thing and likely says more about their current talent level and successful farm system than it does about them being afraid to spend. Here's what Fletcher had to say on Day 2 of free agency, which echoed his comments from last weekend...

Fletcher says he continues to speak to teams and agents for a RD, but doesn't feel he's pressured to do anything right now.

But that doesn't mean there aren't still viable options left on the free agent market, like this name floated out by NBC Sports Philadelphia's Jordan Hall:

A name to possibly keep an eye on: Matt Dumba. He is a righty-shot defenseman who is No. 6 on TSN's trade bait list and was drafted by Fletcher and assistant general manager Brent Flahr while the two were with the Wild.  [nbcsports.com]

And if the Flyers are looking to add some forwards to the mix, there are options there as well, and Jordan points out two intriguing options: Jimmy Vesey and Matt Nieto, both of whom are on the right side of 30 and would each make at least theoretical sense in Philly. For example, Vesey has ties to head coach Alain Vigneault and forward Kevin Hayes.

Will any of those aforementioned players wind up on the South Philly ice next season? We'll find out soon enough as NHL free agency continues on Saturday. Be sure to stay tuned for the latest news and rumors in our live tracker...