The former Eagles’ cornerback has now taken his talents to Broadway 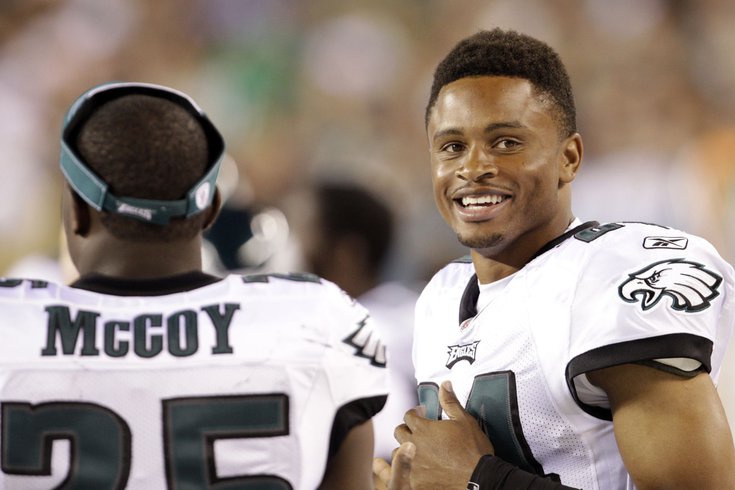 Nnamdi Asomugha has taken his talents from the football world to the acting world.

This month’s episode of HBO’s “Real Sports with Bryant Gumbel” went live this week, and a familiar face to Eagles’ fans was front and center: former Eagles’ cornerback Nnamdi Asomugha.

The four-time All-Pro and three-time Pro Bowl selection played two of his 11 NFL seasons in Philadelphia. Since his football days, the 39-year-old Asomugha has found a new career: acting.

Asomugha had his breakout performance in 2017 in the film “Crown Heights,” and the interview predominantly highlights Asomugha’s latest venture: starring in a Broadway play called “A Soldier’s Play,” a show in which he starred alongside the likes of Jerry O’Connell and David Alan Grier.

Not to mention, Asomugha’s acting career has certainly been helped by being married to a critically-acclaimed television and movie star: Kerry Washington.

During the interview, Asomugha talks about the similarities between football and acting and how he fell in love with football during his upbringing.

He also discusses why he didn’t think he could find something he loved as much as football, but that acting brought him the same rush he felt on the football field.

One cool football tidbit that the viewers learn about Asomugha is that he used to record full-length games to watch while growing up.

He also would keep notebooks on top of notebooks of game-tape notes he took over the years during his career. Asomugha even brings out all of his notebooks to share with Gumbel. It begs to wonder if Asomugha shared any of his notes with former Eagles’ defensive coordinators Juan Castillo or Todd Bowles during his two seasons in Philly.

The interview also doesn’t avoid addressing Asomugha’s subpar seasons in Philly. It’s easy to forget that Asomugha was arguably the best defensive back in football when he left Oakland for the Eagles.

The discussion touches on the five-year, $60 million deal he signed with the Eagles, as well as his struggles and injuries with the Birds.

Of course, Asomugha was one of several key additions to the infamous 2011 Eagles team that became more-popularly known as “The Dream Team,” only to go 8-8 and miss the playoffs.

A snippet of Gumbel’s interview with Asomugha can be viewed below.

The show can be watched on HBO or streamed on HBO Max.