To Philadelphia marathoners, medals are a 'badge of honor' 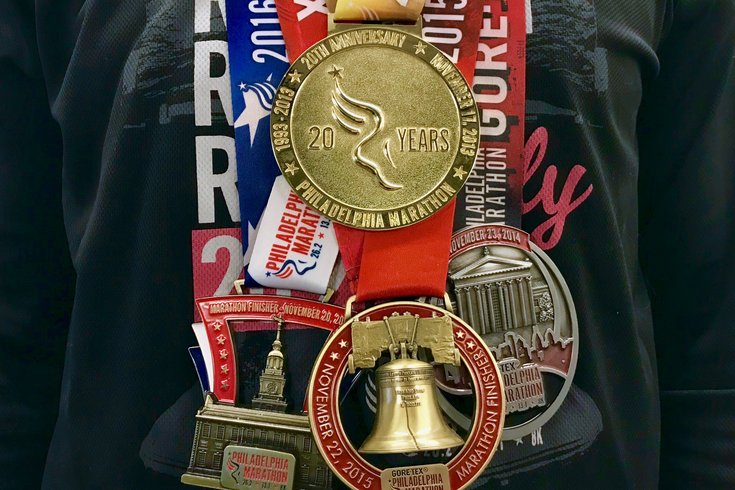 The Philadelphia Marathon has featured the Liberty Bell, Independence Hall and the Philadelphia Museum of Art on recent medals. Race organizers also distributed a gold-colored medallion in 2013 to celebrate the marathon's 20th anniversary.

Dan Povlich remembers the stark contrast in feelings he had when he first ran the Philadelphia Marathon three years ago.

"Going into it, I was excited and looking at it as another race," said Povlich, who had run cross country and finished various road races. "Once I crossed that finish line, I was almost in tears."

Moments later, a race volunteer draped a medal around his neck, a tangible reminder of the months of training he dedicated to completing the 26.2-mile course. He later hung the medallion on a plaque inside his home.

"It's more like all the work that goes into it – the story behind the medal," said Povlich, who will run his fourth Philadelphia Marathon on Sunday. "Each year, I get close to 1,000 miles run. Most runs are nice, but sometimes you're out in the blistering heat, cold, wind or rain."

Povlich, 30, of Old City, is not unique in that regard.

Runners commonly display their race-day prizes on plaques, hooks or shelves. Each one tells a different story – their first marathon, their fastest race or their toughest test.

That leaves race organizers with a tall task – designing a medal that will make runners beam with an additional dose of pride.

"We know that's something the runners really covet and they're proud of," said Leo Dignam, executive director of the Philadelphia Marathon. "You'll see them walking around town the day of the marathon – and the day after the marathon – with their medals around their necks. I guess it's like a badge of honor."

The organizers of the Philadelphia Marathon task an entire committee with designing its medallions, Dignam said. It also seeks input from an ambassador program that includes several runners and stakeholders from the city's running scene.

Recent medals have prominently featured the Philadelphia Museum of Art, Independence Hall and the Liberty Bell. The latter – a 3-D bell that actually dinged – proved so popular that race organizers are bringing back a similar design just two years later.

"People loved the Liberty Bell," Dignam said. "They loved the fact that it's a working bell, that you can actually ring the bell even though it's a medal."

As race organizers promoted the Philadelphia Marathon at expos across the northeast, runners repeatedly asked whether the medal would include the Liberty Bell, Dignam said. That caught the race organizers by surprise.

"The folks that work on this event, we're all lifelong Philadelphia residents," Dignam said. "I think maybe you take the Liberty Bell for granted. It's such an iconic symbol of the country and the city.

The 2017 design features a workable Liberty Bell hanging from its current frame at the Liberty Bell Center. Beneath it sits a pedestal noting the Philadelphia Marathon.

The medal fits among the more creative medallions handed out to marathon finishers across the country.

The Big Sur Marathon in California awards runners with handmade, clay medallions. The Jackson Hole Marathon in Wyoming eschews conventional designs for a medal shaped like a bull skull. And the Cincinnati Flying Pig marathon always features – you guessed it – a flying pig.

Other marathons – particularly the most noteworthy – maintain more classic designs.

The New York City Marathon hands out circular, bronze-colored medals that typically feature the Statue of Liberty or other city landmarks. The prestigious Boston Marathon medals mimic its logo – a unicorn within a horseshoe. 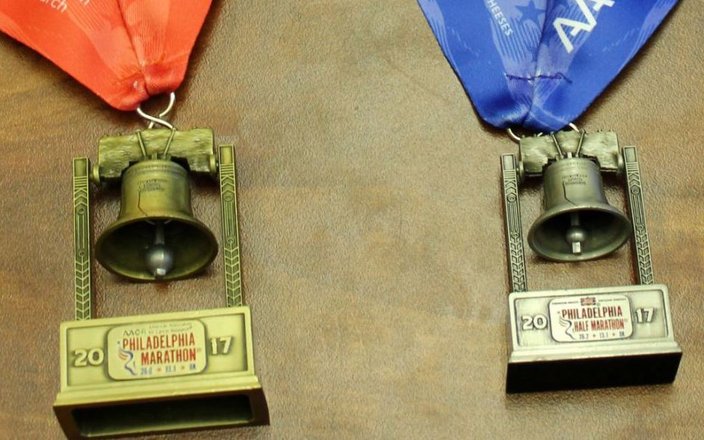 The 2017 Philadelphia Marathon and Half Marathon medals feature a workable Liberty Bell, a design similar to popular medals handed out two years ago.

Lisa Newman, a Philadelphia resident who has run 12 marathons, including Boston three times, typically prefers the more classic designs because they remind her of Olympic medals.

Newman, 58, particularly liked the circular, gold-colored medal the Philadelphia Marathon handed out to mark its 20th anniversary in 2013. But her favorite remains a handmade, glass medallion she earned at the Wineglass Marathon in Corning, New York. 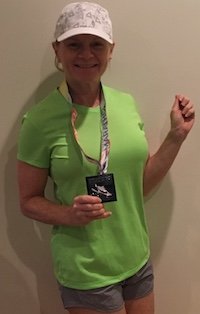 "It is truly the most unique and probably the nicest medal that I have," Newman said. "After that, I like the Boston Marathon (medals). They're always pretty much the same, the half-circle with the unicorn. But they're the most significant of all of them."

Like Povlich, Newman hangs her marathon medals on a series of hooks inside her home. But as she continues to collect them, Newman might reserve the hooks for her Boston Marathon medallions. The others might get placed in a box with her medals from shorter races.

Having recently run the Mohawk Hudson River Marathon in Albany, New York, Newman will instead run the Philadelphia Half Marathon on Saturday. But she'll soon begin training for the 2018 Boston Marathon.

"I do know people who have been running for many, many years who don't even bother taking the medals any more," Newman said. "That, I can't imagine. You're still accomplishing something, doing something that most other people are not able to do, or don't want to do."

Due to the difficulty of completing 26.2 miles, marathon medals tend to be significantly larger than those distributed at shorter races.

Philly's marathon medals are typically twice as large as the version given to half marathon finishers on the same weekend.

It's an added incentive for runners to make it to the finish line.

"Not to say that 5Ks are easy, but it's a marathon," Povlich said. "It became an event because of a story that someone died after running one. Whatever place you come in, finishing it is a pretty significant accomplishment."