Philadelphia is among the top cities in the United States for diversity in STEM fields, according to the latest report from personal finance data crunchers SmartAsset.

The review comes in the context of the role STEM jobs have played as the U.S. recovers from the 2008 global financial crisis, a pivotal development that has nevertheless resulted in an unequal distribution of positions in various parts of the country.

"Initiatives like the National Academic STEM Collaborative have been implemented by the federal government to increase diversity in STEM education while some businesses have created their own diversity initiatives," notes the report. "However, the lack of diversity persists and is not uniformly distributed."

Philadelphia, as the chart below shows, came in fifth with an index of 71.61, well above the national average of 58.89. 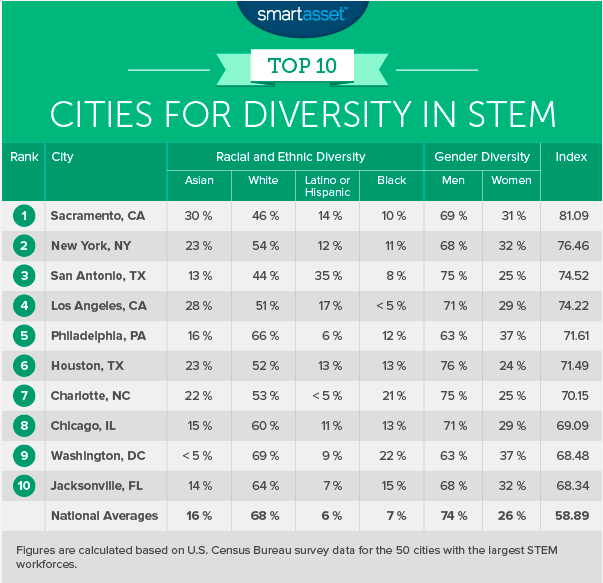 To determine these rankings, SmartAsset looked at U.S. Census data on the demographics of STEM employment in 50 U.S. cities with the highest STEM workforce. Cities received a higher indexed score based on a distribution of the workforce among the eight primary racial and ethnic groups tracked by the U.S. Census Bureau. The same score was determined to account for gender diversity and the two total scores were then averaged.

As the authors point out, it's not particularly surprising that Philadelphia ranked this highly. The city has a strong reputation for STEM diversity, but the score actually fell four points from last year. Whether or not that is a significant change or just a function of the job market is difficult to say.

"The decrease comes because of a drop in ethnic diversity among the STEM workforce. The numbers show a 9 percent increase in White workers compared to 2015. On the bright side they are still one of the best cities for gender diversity, with women making up 37 percent of their STEM workforce. This is compared to the national average of 26 percent."

Overall, the U.S. is moving in the right direction. The national average improved to 58.89 over last year’s 53.50 and firms in the largest cities that showed progress — San Francisco, New York City and Boston — also appear to have made a concerted effort to diversify their workforce.