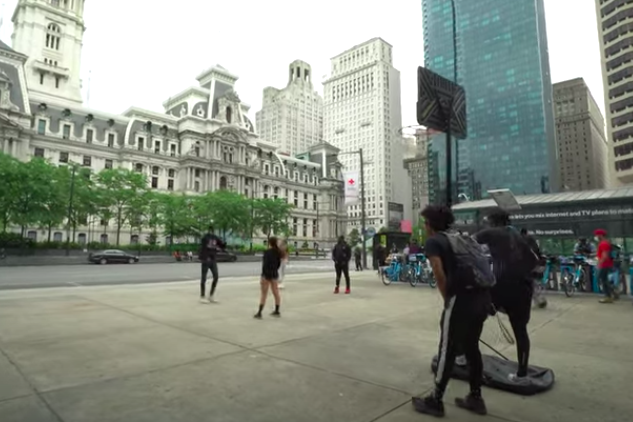 Some Philadelphians are using basketball as a means to bring people together during these difficult times.

Protests and demonstrations have taken place in cities such as Philadelphia to draw attention to issues such as systemic racism and police brutality across the country in the wake of George Floyd’s death in Minneapolis on May 25.

Some protests, including ones in Philadelphia, have turned violent and led to tense confrontations between demonstrators and police.

But a group of Philadelphians, organized by Stephania Ergemlidze, are seeking to bring residents together over basketball. Ergemlidze and her friends have been hauling a basketball hoop across the city this week as a means to peacefully protest and unite both demonstrators and police officers over a common love for the game.

Ergemlidze said that she has been going to various cities across the country over the past year and playing pickup basketball with random strangers. Given the civil unrest across the United States, Ergemlidze felt that this could be a positive way to bring people together during difficult times.

“This is how I know how to spread love, but I encourage everyone to find their own ways as well so we can unite rather than divide,” she wrote on her YouTube page.

Ergemlidze has also started a GoFundMe campaign called “Balling for Justice” so she and her team can travel to other cities, including Minneapolis, Washington, D.C., Baltimore, and Newark, and bring their love of basketball and the hoop with them on the road.

The fundraiser has collected over $2,800 from 100 donors and is seeking to raise $5,000 to cover travel and boarding costs for one night in each city. Any leftover money will be donated to Black Lives Matter causes, Ergemlidze said.

“I am a strong believer in sports uniting everyone and I thought it was worth trying,” she explained on the GoFundMe page. “However, I also wanted to make sure that we weren’t distracting from the main cause, but instead highlighting why love is important and why we should love each other and build each other up as a whole community, and show a positive side of what the protests are all about.”

Ergemlidze went on to say that she’s hopeful that the initiative helped make a difference for both African Americans and the Philly community as a whole.

[The protests] are so much more than just looting and rioting like we’ve been seeing, it’s about people coming together to work together to do what’s right,” she said.

You can watch Ergemlidze’s video of the experience this week here. Just a heads up that she’s got some serious game if you’re looking to play 1-on-1 with her.

APPRECIATE ALL THE LOVE ON THE PROJECT YALL! Like I said on Monday night, I just wanted to do something to spread love and bring people together the way I know how to best! I’ve been working on this project for the past year, hitting up cities with my hoop! Part one for the YT video from yesterday is dropping in 15 minutes! I have not slept yet haha... hope y’all enjoy! Ps best part of this clip...“You let her do that to you!” 😂 FORGOT TO DROP @brett.blackwell AND @stanmadephotos IN HERE TO SAY THANK YOU FOR SHOOTING VIDS ALL DAY AND CAPTURING EVERYTHING!!!

Lol I can’t stop laughing watching this clip... CAPTION THIS! 😂😂😂

Ergemlidze and her friends will be back out on the streets of Philly carrying around her hoop and playing basketball this upcoming Saturday, as they hope to unite and bring more city residents together. But make sure to bring your A-game if you want to ball with Ergemlidze.