The Phillies have been inconsistent the first month of the season, but there's plenty of time 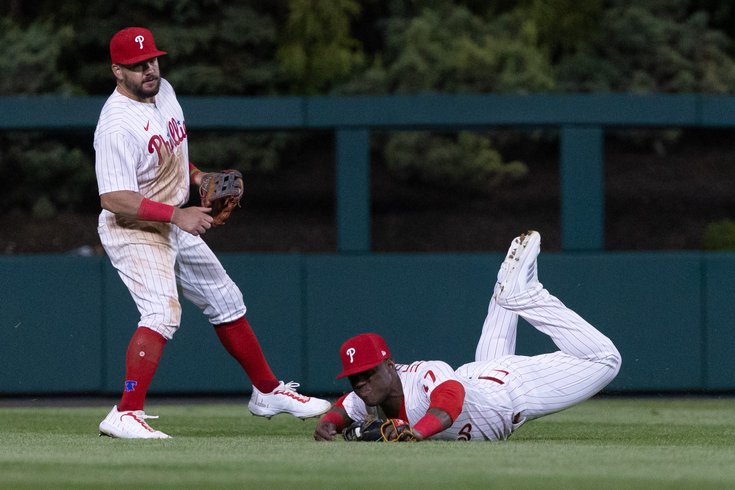 The Phillies have lost four of five series to start the year, but it's still just the first month of the season.

No time to panic, right?

Well, for now, things don't look great. The Phillies haven't put things fully together yet, and a 6-10 record for third in the NL East is hardly what many fans had in mind coming into 2022.

The Phils aren't holding up so hot in power rankings around baseball either.

But the 162-game schedule is a marathon, not a sprint. There are plenty of points around this club to be critical of, but also a lot of time for them to figure it out.

Here's what the NL East looks like going into Monday night's games:

And here's a roundup of where the Phillies stand in power rankings from a handful of outlets:

Here's what they're saying about the Phils:

In a poll of all its baseball writers, the Phillies landed in the bottom half of the Athletic's rankings. Emphasis was placed on the team's weakness in center field (you have to wonder if Mickey Moniak would have helped there), plus a few other struggles.

"One of these years, the Phillies’ merry-go-round of center fielders will come to a stop. For a lineup that is just jam-packed with good hitters, their seeming inability to find one at that spot is perplexing.

Bryce Harper is playing hurt, which has forced Nick Castellanos to play more outfield than is ideal even for the “hit-until-you-field-better” roster-building philosophy for this club. Bryson Stott’s arrival has come with some hiccups. They’re hoping things trend upward for Alec Bohm, too.

The lineup shuffling has started, with Kyle Schwarber, J.T. Realmuto and now Jean Segura taking their cracks at the leadoff spot. There’s urgency this season with the Phillies, as if the entire sport is waiting for the organization to finally get things together and contend. But for all the preseason hype, they’ve already dropped into the bottom half of our rankings." [The Athletic]

Stumbling out the gate

FanGraphs divided its power rankings into tiers and the Phillies fell into Tier 5: High Hopes, Early Disappointments. They joined a list of six other big names teams, including the Astros, Red Sox, and defending champion Braves as a group of clubs aiming to contend but that have been muddled by slow starts and inconsistency.

After about two weeks of play, FanGraphs has the Phils with a 36.7 percent chance of making the postseason.

Not much of note

CBS Sports also has the Phillies in the bottom half of its power rankings and didn't have much praise to sing... except for Kyle Schwarber's blowup at Angel Hernandez Sunday night.

"Not much to like right now, so we'll sing the praises of Kyle Schwarber for his tirade in the direction of home-plate umpire Angel Hernandez on Sunday night. Great job, Kyle." [CBS Sports]

The Phillies dropped five spots down to 19 in USA Today's rankings (conducted by an eight-person panel) but they wanted to note Alec Bohm's production.

After a rough spring that had his future with the Phillies in serious doubt, Bohm is hitting .355 with a .916 OPS through 14 games and 31 at-bats.

He also had a smooth recovery from the "I f---ing hate this place" incident.

The Phillies also dropped to 19 (from 13) in Sports Illustrated rankings, with an 0-3 start from Zack Wheeler being a big reason why. He's definitely not back into the Cy Young contending form he had a year ago, not yet at least.