What they're saying: The Phillies' bats get better, defense gets worse

The Phillies now have a stacked batting order, but their fielding might have gotten even worse 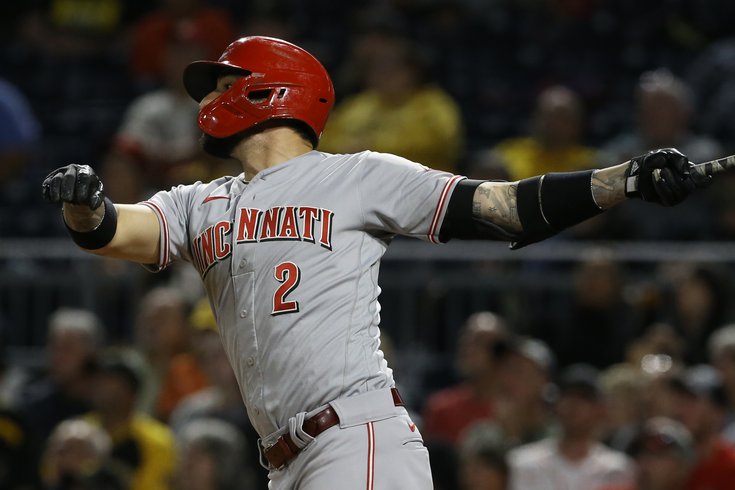 By 11:30 Friday night, the Phillies didn't just spend to the $230 million luxury tax threshold, they blew right by it.

Now, on paper at the very least, the Phillies' lineup is STACKED.

But now that there's been a weekend to think on it, are all those bats coming at a massive cost elsewhere?

Let's see what they're saying...

First and foremost we go to Jayson Stark's in-depth piece, published Monday morning, that takes an extensive look into the Phillies' woefully bad fielding in terms of defensive runs saved.

Minor spoiler: Those issues probably aren't going to improve with Castellanos and Schwarber added to the fold.

Will those issues keep the 2022 Phillies from success? Will they just be able to hit their way through their problems?

Through historical research, and speaking to scouts and baseball executives...maybe. But how far they can actually go is anyone's guess. Team president Dave Dombrowski has done things this way before with the 2014 Detroit Tigers, along with one other group that we're all familiar with.

"Since 2003, 30 teams have finished a season with minus-60 DRS or worse — which is about where the current Phillies glove patrol projects. Only three of those 30 teams made the playoffs (2004-05 Yankees, 2014 Tigers). But there was one NL team that came close. And that group might teach us a lesson that Philadelphians recall vividly.

That team was the 2011 Phillies. Funny how nobody remembers their DRS total. For the record, they finished with minus-56 DRS, which didn’t seem to stop them from rampaging to 102 wins.

That team was loaded with winners and offense. It also trotted out one of the most dominating rotations of modern times. It lost to the Cardinals in an epic five-game NLDS, with Chris Carpenter outdueling Roy Halladay in a 1-0 Game 5 classic. But that team easily could have won the World Series if it had survived that heavyweight slugfest.

The question is: Could this Phillies team follow a similar path? It might just be a matter of baseball physics." [The Athletic]

The Phillies were thin on defense and options in the outfield. Splurging for Castellanos, who only solves one of those problems, may seem excessive in most cases. But Dan Szymborski writes that if the Phillies are serious about being a contender this season, with this core, then the potential results from an overpay would far outweigh trying to stay under the luxury tax and endure another middling season.

"To do nothing this offseason might have been fatal to the Phillies’ hopes of ever becoming a contender with this core. In-house options in left field, center field, and designated hitter all looked around replacement level or possibly worse. But this time, they didn’t just put the band back together for one more album. The biggest moves this offseason were the signings of Kyle Schwarber earlier in the week and now Castellanos, both players at positions at which the Phillies were dreadfully thin. Adding Castellanos also results in the franchise doing something important it had never done before: eclipsing the luxury tax threshold. Yes, there’s a penalty for going over, but the penalty is smaller than the de facto penalty of spending $210 million to have another 82–80 team.

This is not the perfect baseball move. The most glaring problem is that both Schwarber and Castellanos are best utilized as designated hitters, so one of them will always be in the field when both are in the lineup. And when Rhys Hoskins is at DH or has a full day off, both will have to use their gloves — Schwarber at a position with which he doesn’t have a great deal of experience. Castellanos was awful in right field by DRS (-19 runs), UZR (-13 runs), and Statcast (-23 outs) when first moved there full time by the Tigers in 2018. He’s improved since, but he’s still below average and far more likely to decline than improve out there as he ages. There’s a notable difference in his five-year projection in left field compared to designated hitter." [FanGraphs]

How to spend a lot of money in a few days

So how did the Phillies come to the decision to exceed the luxury tax and go get Castellanos?

Matt Gelb has a behind-the-scenes look at how it all went down.

"Castellanos was a “difference-making player” in Dombrowski’s estimation. In the 15 months since the Phillies hired Dombrowski as president of baseball operations, one thing above all else had become clear: His word was gospel among the ownership group. There is unquestioned trust in his evaluations. So, if he was coming to them with this request, it had to be considered.

They consulted with Jim and Pete Buck, Middleton’s ownership partners, who were not in the room. The whole thing took about an hour before a franchise-altering decision was made.

The Phillies were going to pay the tax." [The Athletic]

Everything gets easier for everyone

A lot of talk about highly suspect defense, which really is warranted. But the Phillies did get Schwarber and Castellanos for their bats, not their gloves. And beyond their own numbers, their presence in the lineup should come with another benefit, writes Corey Seidman in his 10 thoughts on the Castellanos signing.

Things should get easier for everyone else. Here's how:

"Castellanos’ presence should affect the rest of the lineup in a positive way. He will likely protect Bryce Harper, setting up opposing pitchers and managers with the kind of pick-your-poison decision late in games the Phillies just haven’t had much of the time behind Harper.

With Castellanos and Schwarber, who are each capable of hitting 30 homers or driving in 100 runs, Harper doesn’t need to carry the offense for months as he did in 2021. J.T. Realmuto doesn’t have to be relied upon as the cleanup hitter or second-best run producer, he can settle more naturally into a complementary offensive role. Realmuto’s strength is his all-around skill set, and realistically, he is probably more of a third or fourth offensive piece for a team with deep postseason aspirations.

Up and down the lineup, Phillies players should feel less pressure. That also includes Alec Bohm, who figures to hit in the bottom-third of the lineup with less scrutiny on every AB." [NBC Sports Philadelphia]